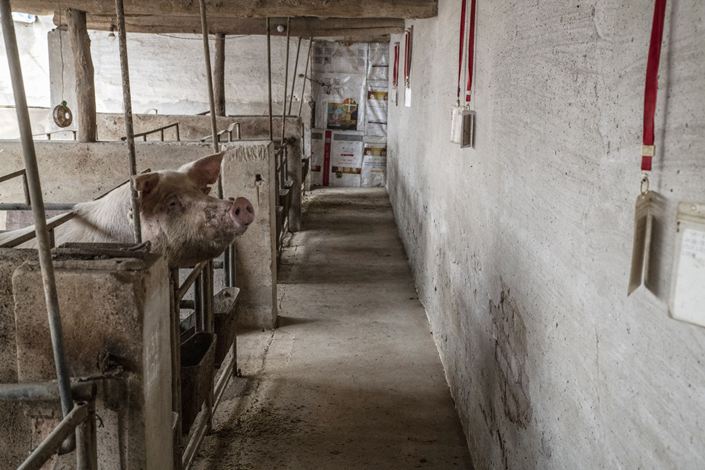 A pig is kept in a pen at a pig farm in Langfang, Hebei province, on April 1, 2019. Photo: Bloomberg

(Bloomberg) — China’s farm ministry is touting a complete recovery in pig numbers from the ravages of African swine fever by the middle of the year. Fresh outbreaks of the virus and other lethal pig diseases could pose risks to that outlook.

Other viruses, such as foot-and-mouth disease and porcine epidemic diarrhea, have also taken their toll in outbreaks exacerbated by a harsher-than-usual winter, said Lin. “The recovery of hog herds in some regions could be delayed, particularly in Shandong and parts of Henan and Hebei,” he said.

It means that as much as 15% of the national hog herd may have been lost to disease over the winter, and its full rehabilitation to pre-swine fever levels is more likely by the second-half of 2022, said Wang Zhong, chief consultant at Systematic, Strategic & Soft Consulting Co. The outbreaks have included new variants of swine fever that have proved less easy to detect and harder to control, he said.

Stabilizing the pig population and reducing market volatility had been a high priority for policy makers ever since swine fever descended on China’s hog herd, the world’s largest, in 2018. There’s no officially sanctioned vaccine and the epidemic caused the number of pigs to nearly halve, spurring a spike in pork imports and prices.

Global agricultural markets have been roiled further in recent months by the government’s drive to deliver a rapid recovery in numbers, which has led to massive shortages of feed grains and emptied silos as far afield as North America.

China’s hog population had returned to 90% of its normal levels by the end of November, according to the agriculture ministry. The ministry didn’t respond to a fax seeking comment on its latest forecasts.

Efforts to speed up the release of imported meat held at ports and in cold storage, estimated at about 1 million tons, should help keep a lid on pork prices, said Bric’s Lin. Meanwhile, live hog futures on the Dalian Commodity Exchange hit their highest close on Monday since the contract debuted last month.