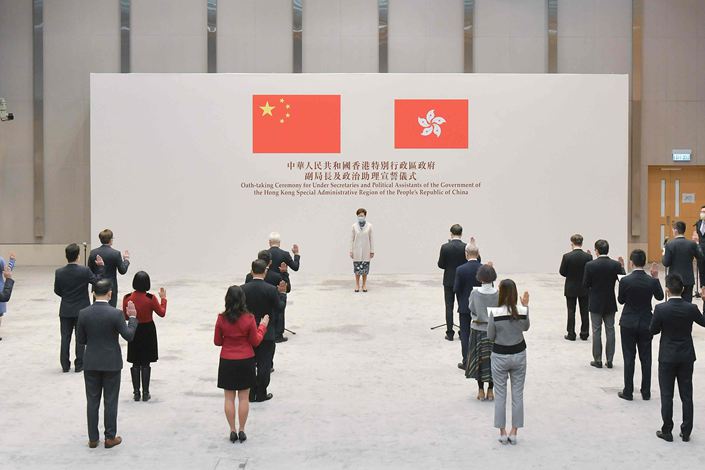 Hong Kong plans to make local district council members swear loyalty to Beijing or face removal from office and a five-year ban on running for reelection, in the latest sign that the Chinese government intends to further tighten its grip on the semi-autonomous territory.

The Executive Council, Hong Kong’s cabinet, has backed a bill that would amend electoral rules to “ensure patriots govern Hong Kong,” said Erick Tsang, Hong Kong’s Secretary for Constitutional and Mainland Affairs, at a Tuesday press conference. The bill will be discussed next month.

The statement came a day after Xia Baolong, the director of the Hong Kong and Macau Affairs Office, said the notion that “patriots” govern Hong Kong formed part of Chinese control over the former British colony.

In recent months, authorities in Hong Kong have ousted officials for perceived disloyalty to China and put pan-democracy leaders on trial. The moves follow the implementation last year of a national security law that targets acts of treason, secession, sedition and subversion against the Chinese government.

If passed, the new electoral rules would require district councilors to make and uphold oaths of fealty to Hong Kong as a special administrative region of China and to the Basic Law, the city’s mini-constitution. Members of Hong Kong’s legislative council and other civil servants already have to make such pledges.

The bill requires oath-takers to sincerely and in good faith observe, support, uphold and believe in constitutional order, national sovereignty and territorial integrity as enshrined in the Chinese constitution and the Basic Law.

It also includes specific requirements that councilors pledge allegiance in a genuine and dignified manner, and read the oath accurately and in full.

The bill includes a list of actions that violate the oath, including breaching the National Security Law, supporting Hong Kong independence and seeking interference by foreign governments or organizations in Hong Kong’s affairs.

If deemed to have violated their oaths, the councilors could face suspension, expulsion from office and a ban on running for election again for five years. Those found to have made false oaths could receive up to seven years in jail under Hong Kong’s Crimes Ordinance.

During Hong Kong’s most recent district council elections in 2019, pan-democracy candidates made dramatic gains while those allied with the pro-establishment camp suffered significant losses.

In a speech on Monday, Xia said “patriots governing Hong Kong” was part of China’s “one country, two systems” policy.