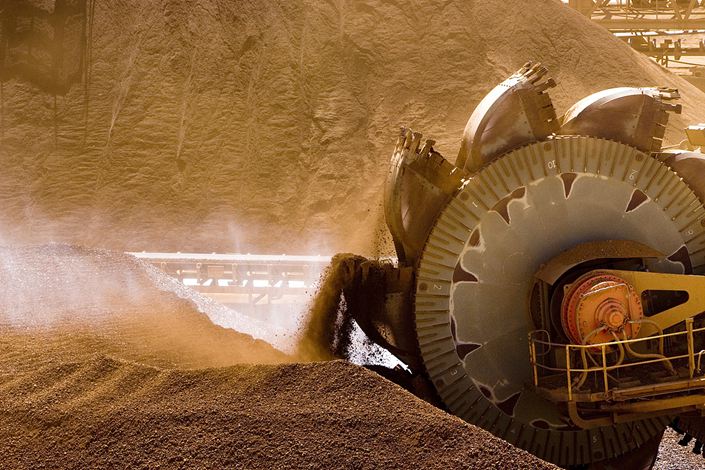 The value of iron ore shipments to China in January dropped by A$471 million, or 5%, to A$9.7 billion. Only the record iron ore price prevented a further slide in the value of exports. Prices rose 8% in the month.

China still bought 80% of Australia’s exports of the commodity in January.

The quantity of iron ore exported dropped by 7.2 million tonnes, or 12%.

Cereal exports declined by A$213 million, or 77%, and meat exports fell by A$106 million, or 41%, according to Australian Bureau of Statistics data released on Tuesday.

The decline in grains was driven by an 83% drop in wheat exports after December shipments to China posted the largest monthly wheat exports there on record.

In January last year, 50% of Australia’s red wine went to China. That fell to just 1% in January this year after the introduction of tariffs on Australian wine in late November.

State Street Global Advisors senior economist Simona Mocuta said the shift to diversify away from China to other countries needed to be more enthusiastic.

“There needs to be more strategic emphasis on the vulnerability of one large customer. There has to be a strategy around how to minimise this and this is regardless of who you are. Extreme reliance is not good.”

The trade restrictions could also backfire politically, she said. While China takes more exports from other countries to replace those from Australia, other customers squeezed out will be able to go to Australia.

“It’s created a game of musical chairs. You are seeing a reshuffling of demand to other suppliers so those who were reliant on the suppliers are now looking to Australia.

“I think it could backfire because there is always more to this game than economics. Trade policy should be a reflection of trade but this is not.”

Declines in trade with other top export destinations helped the goods trade surplus drop 4% in January to A$8.8 billion.

This story was first published by The Australian Financial Review