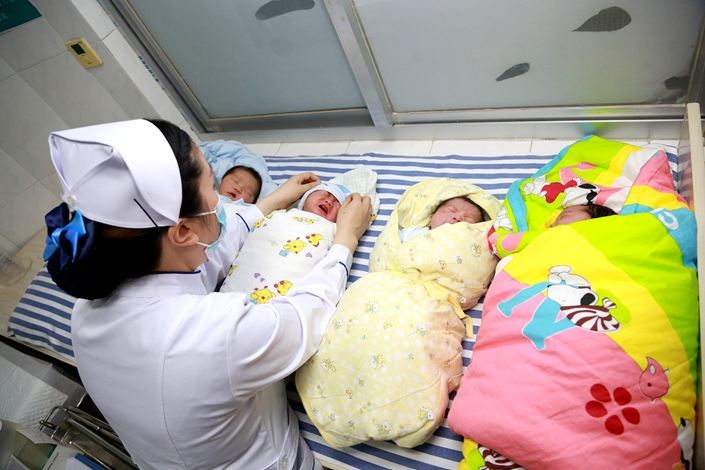 Given the combined effects of a low fertility rate and that many working-age people have left, Northeast China’s population is aging even faster than many other parts of the country. Photo: VCG

In response to a proposal from a lawmaker, China’s National Heath Commission suggested (link in Chinese) it was open to the idea of scrapping birth restrictions in China’s northeast, saying that the region “can conduct explorations based on their real situations … and form a pilot program.”

Many people believe that the northeast is likely to welcome the big change. However, can “fully liberalizing birth restrictions” really solve the region’s troubles?

Northeast China has a very serious population problem, which is clear from its birth rates.

For a long time, the birth rates of China’s three northeastern provinces — Heilongjiang, Jilin and Liaoning — have been much lower than the average level in China. The northeast, where state-owned enterprises (SOEs) dominate, has adopted the government’s family planning policy more strictly than many other places. It is very common in the region for a family to only have one child.

In 2010, the net outflow in the whole region reached 1.8 million, compared to a net inflow of 360,000 in 2000, census data show. The populations of permanent residents in Heilongjiang, Liaoning and Jilin have been declining since 2014, 2015 and 2016, respectively. It is significant that many of the people that migrated out of the region are of working age — those aged 15 to 64.

Also, graduates from top northeastern universities prefer to settle in more developed regions including Beijing, Shanghai, and Guangdong and Zhejiang provinces. For example, only 11.89% of graduates from the Harbin Institute of Technology stayed in the province where the university is based, with the figure being 17.2% at Northeastern University and 27.02% at Jilin University.

Given the combined effects of a low fertility rate and that many working-age people have left, Northeast China’s population is aging even faster than many other parts of the country.

People in the northeast have a low desire to have children, just like in many other parts of the country. But the continued outflow of population may be more worrying. The shrinking high-quality working-age population in turn depresses birth rates.

The fundamental reason for the region’s population problem is the sluggish transformation of its economy.

In the 1950s, the Chinese government concentrated resources on industrialization, with the three northeastern provinces the key region. Under the planned economy system, the region became “a pig that could fly” with the support of government policies. The local economy’s rapid development attracted many migrants. Its resource-based industries, such as oil processing, coal, iron and steel, played a leading role in the growth of the Chinese economy.

However, the other side of the coin is that the planned economy mindset, which is deep-rooted in Northeast China’s society as a whole, has an irresistible inertia and dragged development. And the national government’s efforts to reduce excess capacity also became a “curse.” In addition, local governments’ lack of a sense of crisis, as well as their comparatively low degree of marketization, brought multiple hurdles to the transformation of the economy.

In its long-term plan to revitalize the northeast, the central government’s policy, funds and supportive programs have mainly focused on restructuring SOEs, aiming to help them turn a profit and get out of trouble. But this has just further cemented the absolute dominance of SOEs there and slowed down the process of marketization. As a result, it is difficult for the private economy and various emerging industries to grow healthily, meaning its economy lacks momentum and vitality.

Thus, liberalizing birth control is a positive signal. But that’s not enough. Even if more babies are born, many of them will likely later move to more developed regions if the northeast does not adjust other aspects.

In other words, the northeast should consider how to retain residents in addition to having more births.

The urgent task is to take the opportunity of “fully liberalizing birth restrictions,” vigorously boost the economy, speed up marketization, guide the transformation and upgrading of traditional industries, cultivate emerging industries, improve the business environment, and provide fertile ground for the private economy.

The northeast should also make a great effort to retain talents and give them support in housing, education and pensions, and to bring down the cost of having a child.

Fu Yifu is director of the consumer finance research center of the Suning Institute of Finance, an affiliate of Chinese retailer Suning Holdings Group Co. Ltd.