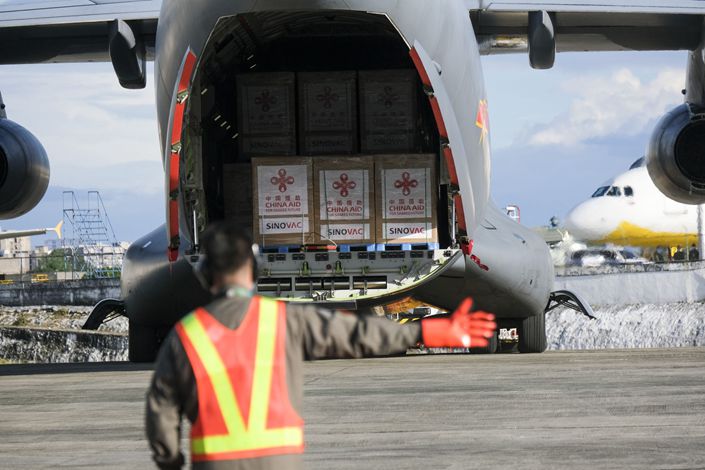 Containers of the Sinovac Covid-19 vaccine arrive on a Chinese military aircraft in Manila on Feb. 28. Photo: Bloomberg

The director of state-run Philippine General Hospital, neurosurgeon Gerardo Legaspi, was first to be inoculated with the Sinovac vaccine, with more vaccinations expected in public hospitals in Metro Manila, the capital region.

“Let’s not wait for the best vaccine. There’s no such thing,” said Carlito Galvez, who leads the nation’s vaccine procurement efforts. “The best vaccine is the one that’s safe and effective, and arrives early.”

The Philippines is among the last in the region to begin inoculations against Covid-19, with Malaysia and Thailand starting days before, while Singapore and Indonesia even earlier. It has the second-worst outbreak in Southeast Asia, with daily infections rising above 2,000 again in the past days.

President Rodrigo Duterte said Sunday that he’s considering further easing virus restrictions once the nation’s vaccine stockpile reaches 2 million, and once shots reach the countryside. “Once I see that we have many vaccines, I will open everything,” he said.

Almost half of Filipinos however are not inclined to get a Covid-19 vaccine mainly due to safety concerns, according to survey released January. Public trust in China has also been consistently low, even as Duterte built warm ties with Beijing.