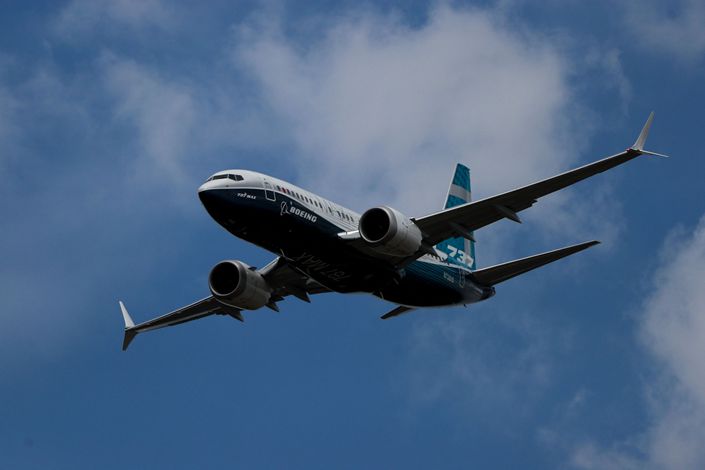 A Boeing Co. 737 Max 7 jetliner flies during the flying display on the opening day of the Farnborough International Airshow 2018 in Farnborough, U.K. Photo: Bloomberg

(Bloomberg) — China still has major safety concerns about Boeing Co.’s 737 Max, the deputy head of the country’s aviation regulator said Monday when asked if it was considering following others in allowing the plane to fly again.

Once issues have been fully addressed, China will conduct a final review of the aircraft, Dong Zhiyi said at a briefing in Beijing. Authorities have been in “full communication” with Boeing and the Federal Aviation Administration, he said.

China, a crucial market for Boeing and the Max, was the first country to impose a ban on the aircraft after a crash in Ethiopia in March 2019 that killed 157 people. The previous October, a Max jet operated by Indonesia’s Lion Air plunged into the Java Sea, claiming 189 lives. Both disasters were partly blamed on software that pushed the planes into nosedives.

Other nations followed China’s lead on the flight ban, resulting in the Max being grounded globally for about 20 months. Several major regulators have certified it to fly again in recent months and it is back in service in the U.S., Europe and Brazil. Australia lifted its ban on the plane last week, as did Saudi Arabia on Monday, state media reported. But China hasn’t budged.

A spokesman for Boeing didn’t immediately respond to a request for comment on Monday. Shares of the Chicago-based company were up 2% to $216.22 from Friday’s close in pre-market U.S. trading, amid a rally in U.S. equity futures.

Boeing’s China orders largely dried up in the past four years amid heightened tension between Washington and Beijing around trade and other areas, as well as concern over the Max, which was a best-seller.

“I do believe that when a constructive relationship is begun, then things will quiet down and the Chinese will want to get airplanes,” Boeing CEO Dave Calhoun said in December, the same month the Max returned to commercial service in the U.S. for the first time since the grounding.

China has three main criteria that need to be met before allowing the Max to fly again: changes in design aimed at fixing the plane’s problems need to be approved by China, pilots need to be retrained to fly the jetliners following those changes, and the conclusions of the Ethiopian and Indonesian crash reports need to be clear.

Ethiopian investigators have said they plan to release their final report around the second anniversary of the March 10, 2019 crash.

The big three Chinese carriers — Air China Ltd., China Southern Airlines Co. and China Eastern Airlines Corp. — are all Max customers, along with about 10 others in the country.

In a recent market outlook, Boeing said China will continue to be the main driver of the aviation industry’s worldwide growth over the next 20 years. Chinese airlines are likely to buy 8,600 new airplanes worth $1.4 trillion during the period, the U.S. manufacturer said.