China Won’t Ground Any Aircraft in Wake of Boeing Engine Failure in U.S. 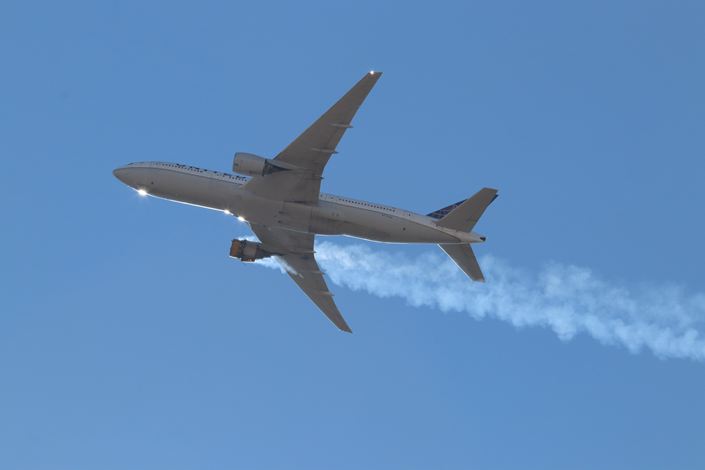 In the wake of an incident over the weekend in which the right engine of a Boeing 777 exploded in flight, China’s aviation authority said it will not ground any aircraft because the country doesn’t have any planes of the same model powered by the same engine type.

The Civil Aviation Administration of China (CAAC) said no Chinese airline operates any 777s with PW4000-112 engines, the aviation bureau said in a statement through state television CCTV 2.

The 777-200 jet was traveling from Denver to Honolulu on Saturday when its right engine failed during take-off, and parts of its fan blades and exterior fell to the ground. The plane completed an emergency landing back in Denver, with none aboard reporting injuries.

The U.S. Federal Aviation Administration (FAA) said on Sunday that it is issuing an Emergency Airworthiness Directive that requires the immediate inspection of the airplane model in question. It also urged more frequent regular inspections of the hollow fan blades, which were thought to have contributed to the latest incident, and said they are “unique to this model of engine.” The engines are made by Raytheon Technologies Corp.’s Pratt & Whitney subsidiary.

Boeing recommended suspending the operation of all the 128 airliners of this model powered by PW4000-112 engines as the investigation continues, the aerospace firm said in a statement Sunday.

The CAAC said it would follow the developments of the U.S. investigation into the incident, but hasn’t grounded any aircraft.

The 777-200 model comes with one of three engine types — the PW4000-112, GE90 models from General Electric Co. and the Rolls-Royce Trent 800. All of the Boeing 777 jetliners purchased by Chinese airlines are thought to be equipped with GE90s.

United Airlines is the only U.S.-based airline that uses 777s with PW4000 engines. Japan and South Korea are the other nations that also have operators using this combination. Tokyo ordered its domestic airlines to ground 32 such planes on Sunday, and Seoul followed suit on Monday, grounding six that had been in operation.

This is not the first in-air malfunction from this combination of engine and jetliner. In December, a Japan Airlines flight encountered similar engine failures to that seen by United Airlines Flight 328.

China was the first country to ground the Boeing 737 Max jet in March 2019, following two fatal crashes that killed a total of 346 people in Ethiopia and Indonesia. In November last year, the FAA cleared the 737 Max to resume flights, after a 20 month hiatus, but China has not followed suit.