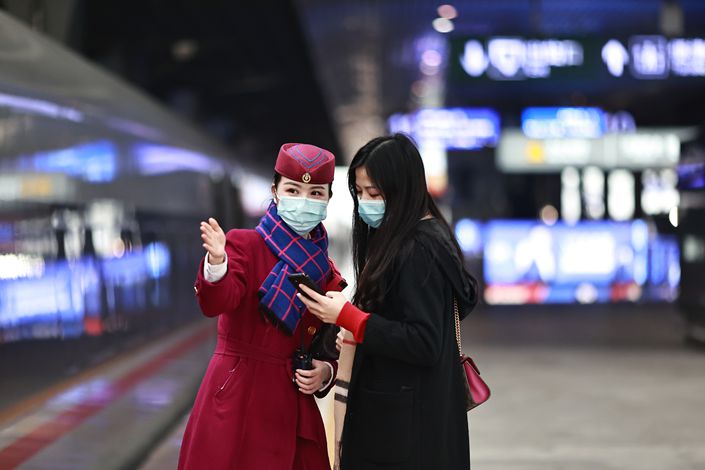 A train attendant gives directions to a passenger at a railway station in Chongqing in Southwest China on Feb. 11. Photo: VCG

Services activity in China grew at a slower clip and inflationary pressure mounted last month, a Caixin-sponsored survey showed Wednesday, adding to evidence that the economic recovery might be losing momentum as growth in manufacturing also reportedly slowed.

The Caixin China General Services Business Activity Index, which gives an independent snapshot of operating conditions in the services sector, declined to 51.5 in February from 52 the previous month, hitting the lowest level since April 2020.

A number above 50 indicates an expansion in activity, while a figure below that points to a contraction. The index, better known as the Caixin China services PMI, shows that services activity has expanded for 10 straight months, though the pace has slowed for three straight months.

Both supply and demand in the services sector grew at a slower clip. The measure for new business dropped to the lowest in 10 months, though it remained in expansionary territory. Overseas demand worsened as new export orders shrank for the first time in four months.

“While a number of firms commented on firmer client demand, there were reports that the recent resurgence of Covid-19 cases globally had dampened sales growth,” London-based data analytics firm IHS Markit Ltd., the company that compiles the Caixin PMIs, said in a statement Wednesday.

Employment was under higher pressure, with its measure falling below 50 for the first time in seven months. “Service providers cut staff to reduce costs as weakened market sentiment had a knock-on effect on the job market,” said Wang Zhe, senior economist at Caixin Insight Group.

Inflationary pressure mounted as input costs still rose fast last month amid higher costs for labor and raw materials. Businesses have raised the prices they charge customers for seven straight months, albeit at a marginally slower pace in February than in the previous month.

Service providers remained optimistic about their prospects as the measure for business expectations rose even higher into expansionary territory. “Hopes that the Covid-19 pandemic will come to an end were central to upbeat forecasts,” IHS Markit said, adding that surveyed companies also mentioned planned expansions and new product releases.

Government surveys of purchasing managers in the manufacturing and services sectors also signaled a slowdown in economic recovery, as the official manufacturing PMI fell to 50.6 (link in Chinese) in February from 51.3 the previous month. The official services PMI slipped to 50.8 from 51.1.

The impact of the weeklong Lunar New Year holiday, which fell in February this year, contributed to the decline in the official manufacturing PMI, according to a Sunday statement (link in Chinese) from the National Bureau of Statistics.