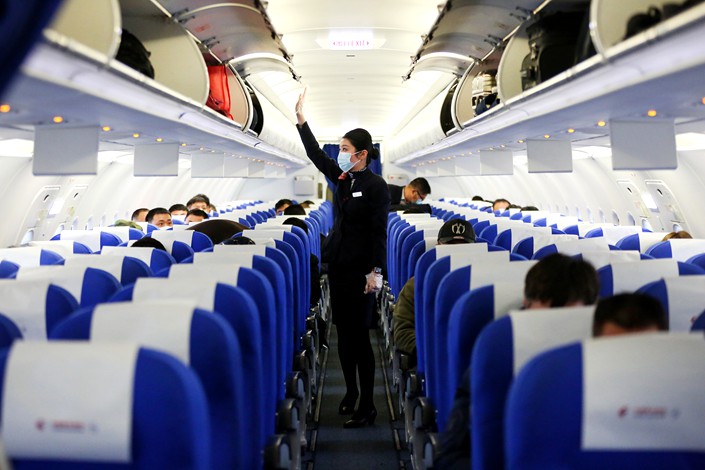 The Caixin China General Services Business Activity Index, which gives an independent snapshot of operating conditions in the services sector, fell to 52 in January from 56.3 the previous month. A number above 50 indicates an expansion in activity, while a figure below that points to a contraction.

Although the index, better known as the Caixin China services PMI, has been in expansionary territory since May 2020, January’s reading marked the second straight monthly decline.

“Overall, the manufacturing and services industries continued to recover in January, but the momentum of both supply and demand weakened, dragged by subdued overseas demand,” said Wang Zhe, senior economist at Caixin Insight Group. “This year, we need to keep an eye on the effectiveness of domestic epidemic prevention, and look at how to add momentum to the Chinese economy as uncertainties about overseas demand continue.”

The decline in the readings of both the Caixin manufacturing and services PMIs are mirrored in the official government surveys of purchasing managers released on Sunday — the manufacturing PMI fell to 51.3 from 51.9 in December, while the services PMI slumped to 51.1 (link in Chinese) from 54.8.

The weakness could continue into February as the annual Lunar New Year holiday, which usually sees factories close for several weeks, and the restrictions imposed by the government to prevent a resurgence of the coronavirus, combine to hurt both production and consumption.

The resurgence of Covid-19 cases in China may negatively affect industries including transport and logistics, accommodation and catering, wholesale and retail, and real estate in February, analysts with Huatai Financial Holdings (Hong Kong) Ltd. wrote in a report released on Sunday.

However, as fewer migrant workers are expected to return home for the Chinese New Year festival amid government restrictions on travel, more factories are likely to stay open over the holiday which will support activity in the manufacturing sector, they said.

In the Caixin services PMI, the gauge for total new business dropped for the second month in a row in January and was at its lowest level since August 2020, although it remained above 50. New export business rose at the slowest pace in three months, as customer demand was dampened by the ongoing Covid-19 pandemic, the survey showed.

The rate of job creation in the services sector eased further after reaching a more than decade high in November. Softer-than-expected sales growth and the increased workforce allowed companies to clear orders more quickly, with backlogs of works falling in each of the past three months, the survey showed.

A gauge of input prices rebounded after a dip in December and showed the second-highest reading since April 2012, as higher costs for labor, raw materials and transportation pushed average operating expenses higher. Faced with higher cost burdens, companies have raised the prices they charge customers for six straight months, although they did so at a slower pace in January than the previous month.

Optimism over the outlook softened in January, with the measure of business expectations falling to the lowest level since September, although still well above 50. “Firms widely expect customer demand to recover and activity levels to expand once the COVID-19 pandemic comes to an end,” the survey report said. “However, uncertainty over the trajectory of the virus weighed on overall confidence.”

This story has been corrected to reflect that the official services PMI, rather than the nonmanufacturing PMI, slumped to 51.1 in January, and that services companies have raised the prices they charge customers for six straight months, not three straight months.