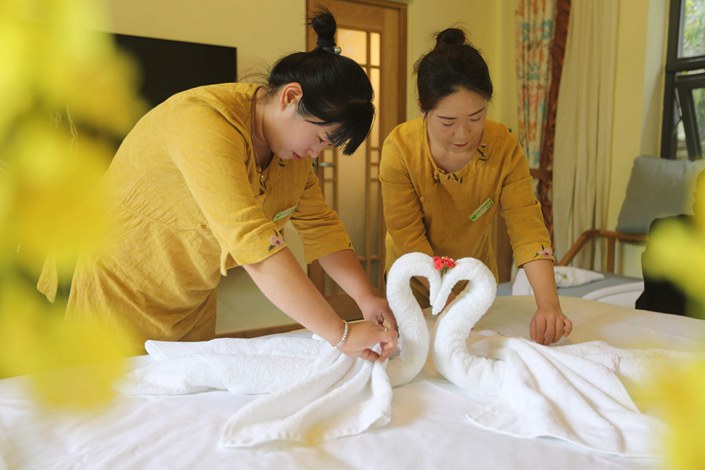 The Caixin China General Services Business Activity Index, which gives an independent snapshot of operating conditions in the services sector, rose to 57.8 in November from 56.8 the previous month, hitting the second-highest level since April 2010, below only June’s 58.4 reading.

A number above 50 indicates an expansion in activity, while a figure below that points to a contraction. The index, better known as the Caixin China services PMI, has been in expansionary territory for seven months in a row.

Overseas demand returned to growth in November after shrinking for four months, with the measure for new export business reaching the highest point since April 2019. “Uncertainties caused by the pandemic did not slow growth in demand for services exports,” said Wang Zhe, senior economist at Caixin Insight Group.

Rising supply and sales in the services sector prompted employers to add more staff, as the rate of job creation recorded the highest reading since October 2010.

Inflation pressure in the sector was heightened amid positive market sentiment. Service providers’ input costs rose at the fastest pace since August 2010, driven by higher raw material and staffing costs.

“Firmer demand conditions enabled firms to partially pass on their increased cost burdens to clients in the form of higher output prices,” IHS Markit said, as the measure for prices that businesses charged customers rose to the highest level since February 2010.

China’s official services PMI, which was released on Monday, rose to 55.7 (link in Chinese) in November from 55.5 the previous month, an over eight-year high.

Some service providers have begun to see their business performance rebound, especially those in the travel industry. Nasdaq-listed Trip.com Group Ltd., a leading Chinese online travel agency, reported its first quarterly net profit so far this year on Tuesday, with net income attributable to shareholders reaching 1.6 billion yuan ($234 million) in the June-to-September period, reversing from a net loss of 476 million yuan the previous quarter.

“In the third quarter of 2020, the global travel industry continued to be under significant pressure from the Covid-19 pandemic. However, in China, we have already seen most of our major business segments return to pre-Covid level of activities in recent months,” Trip.com Executive Chairman James Liang said in a statement. “The speedy recovery in our China market demonstrated once again the strong resilience of the travel industry.”

Some analysts said that the services recovery will be affected in future by to what extent the Covid-19 pandemic is controlled. “A massive introduction of vaccines could lead to the final suppression of Covid-19 worldwide. The suppression would be positive for the services sector,” economists at Nomura International (Hong Kong) Ltd. wrote in a Monday note.

“In face of the strong recovery, the priority for policymakers in the next six months is to exit the ultra-loose policy,” analysts at Macquarie Capital Ltd. wrote in a Wednesday note. “To be sure, it should be a gradual process and the PBOC (People’s Bank of China) doesn’t want to overdo it.”

The Caixin manufacturing and services PMIs, both compiled by IHS Markit, provide some of the earliest available monthly indicators of economic conditions in China.