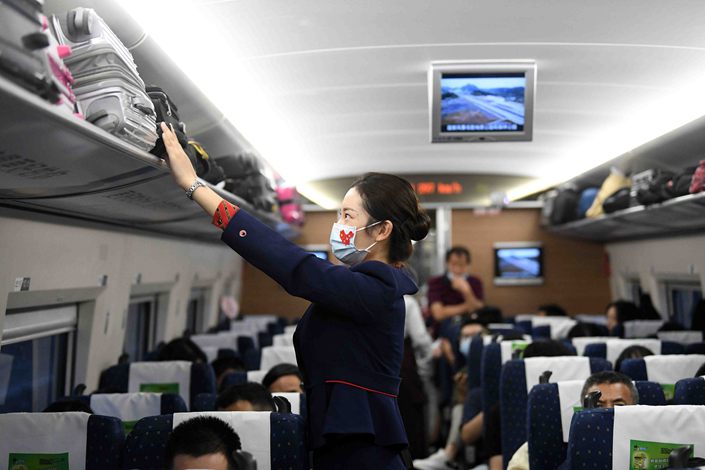 China’s services activity expanded at the second-fastest pace in a decade in October with a sustained increase in total new business, a Caixin-sponsored survey showed Wednesday, as the sector’s post-epidemic recovery continued to accelerate.

The Caixin China General Services Business Activity Index, which is better known as the services PMI and gives an independent snapshot of operating conditions in the services sector, rose to 56.8 last month from 54.8 in September. A number above 50 indicates an expansion in activity, while a figure below that points to a contraction.

The survey, which was carried out between Oct. 9 and Oct. 21, showed the services PMI hit the second highest level since August 2010, after only June this year, marking the sixth month in a row the index has been in expansionary territory.

Notably, the gauge for business expectations for the next 12 months rose to the highest since April 2012, in a sign that companies are confident about the effective domestic control of Covid-19 and ongoing economic recovery, said Wang Zhe, senior economist at Caixin Insight Group. “Forecasts for growth were supported by expectations of further improvements in customer demand and that global economic conditions will strengthen once the pandemic is under control,” the survey said.

In October, total new business in the services sector rose at the fastest clip in four months. However, new export business contracted further, remaining in negative territory for the fourth month in a row, as Covid-19 cases across several export markets resurged. New waves of coronavirus infections in Europe and the U.S. have significantly suppressed overseas demand, Wang said.

Employment expanded for the third consecutive month in October, marking its highest point since September last year as companies expanded their hiring in the face of strong domestic demand, the survey showed.

Service providers recorded a stronger rise in input costs, with the steepest rate of inflation for over two years, as higher staff and purchasing costs added to rising operating expenses. Meanwhile, the prices charged by service providers increased at a slower pace than input costs, as they tried to remain competitive, according to the survey.

China’s official services PMI, which was released on Saturday, rose to 55.5 (link in Chinese) in October, the highest reading since June 2012.

The Caixin China General Composite PMI, which covers both the manufacturing and services sectors, came in at 55.7 last month, up from 54.5 in September, signaling an accelerated recovery in business activity. October’s Caixin China manufacturing PMI, released on Monday, rose to the highest in nearly a decade. The Caixin PMI surveys provide some of the earliest available monthly indicators of economic conditions in China.

“Overall, as the domestic epidemic situation stabilizes, recovery remained the main economic theme. Supply and demand were both positive in the manufacturing and services sectors,” said Wang.