In Depth: China’s Services Sector Pulls Out All the Stops to Survive the Coronavirus 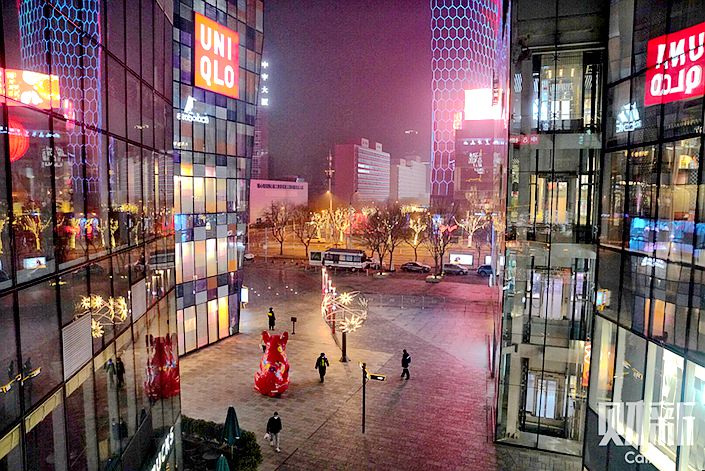 On Jan. 23, two days before the start of the Lunar New Year holiday, Beijing’s Palace Museum and Shanghai Disney Park should have been buzzing with tourists.

Instead they were closed. Both cities had issued level one health emergency alerts, which were also issued in 12 other provincial-level regions, in response to the outbreak of a new kind of viral pneumonia that had just been revealed to be spreading from person to person.

The next day, hotpot brand Haidilao closed more than 500 restaurants across the country, seven holiday films were withdrawn from the cinema, and all domestic tourism was put on hold by government decree.

International travel bans followed, flights were grounded, and companies like McDonalds and Starbucks joined the growing list of firms suspending business on the Chinese mainland.

That was just the start. The virus that causes Covid-19, which has taken more than 1,300 lives and infected tens of thousands of people, has also hit China’s service and entertainment industries particularly hard, from catering to film, to luxury, tourism and hotels. From Jan. 24 to Jan. 30, the Chinese box office took in less than 20 million yuan ($2.9 million). It had expected to earn 6.9 billion.

There have been echoes of the SARS outbreak of 2002 to 2003 that rocked China’s economy. But back then, the country was far less developed. Today it is the world’s second-largest economy, home to millions of companies and factories.

Plummeting demand during the holiday season has left many private companies with cash flow problems that will last three months at most, leaving the country’s services sector scrambling to find a way out of bankruptcy even as business looks bleak. Measures like seeking financial assistance, closing branches and transforming businesses from offline to online are seen as the only way for virus-stricken domestic companies to keep running.

How the services sector survives this unforeseen crisis will be a good indicator of how hard the Chinese economy, which was already growing at its slowest pace in 30 years, will be hit. The services sector made up 54% of China’s GDP in 2019, according to preliminary data from National Bureau of Statistics.

With people across China told avoid gathering outside to prevent the disease from spreading, one way that service companies have responded is by moving business online.

When film studios lost out on revenue after their movies were pulled from cinemas, director Xu Zheng unexpectedly sold his comedy “Lost in Russia” for 630 million yuan to a video platform owned by technology company Bytedance Inc. Later, another comedy “Enter the Fat Dragon,” directed by Wang Jing, was sold to iQiyi Inc., a Netflix-like online video platform developed by the Chinese Internet giant Baidu Inc.

In the three days after its online premiere, people viewed “Lost in Russia” more than 300 million times.

Some online ticketing platforms have also taken to the idea as a path to long-term growth. “The coronavirus outbreak is not just going to be a special case (for moving to online streaming),” said an anonymous executive of an online ticketing platform. “More and more cases like this will emerge in the future, just like they did for TV shows, which at one time were not allowed to be broadcast online. Now, they are all available on online platforms.”

Another sector finding some breathing room on the internet is food delivery. Retailers, including e-commerce titans Alibaba Group Holding Ltd. and JD.com Inc., have seen from far more orders than they expected for food items.

During this year’s Lunar New Year, orders for vegetables on JD.com more than tripled from last year’s holiday, with total sales of nearly 150,000 tons nationwide, according to the state-run Xinhua News Agency. Sales of grain oil and meat products both skyrocketed 700% year-on-year on JD.com in the first nine days of the holiday.

With policymakers still considering measures to help businesses struggling during the coronavirus outbreak, real estate companies and others have announced plans to cut their tenants and partners a break.

China Resources Land Ltd. and a subsidiary of real estate giant China Vanke Co. Ltd. announced on Jan. 25 that they would be offering commercial tenants waivers on rent for 36 days and 16 days, respectively. The waivers aim to take some of the financial pressure off the many retailers that have closed stores during the outbreak. Along with Vanke and China Resources Land, eight other companies, including Longfor Group Holdings Ltd. and the real estate arm of state-owned conglomerate Cofco Corp., have announced rent waivers that amount to more than 5 billion yuan.

Nasdaq-listed online travel agency Trip.com Group Ltd. responded on Feb. 5 by pledging to hand out 1 billion yuan worth of funds to its hotel and airline partners and issue 10 billion yuan in loans for small and micro business as an incentive for them to stick with the company.

No choice but to scale back

Many businesses that have not received assistance have been forced to downsize to cut their losses.

Due to dwindling tourist numbers in Hong Kong after months of protests and then the virus outbreak, jewelry store chain Chow Tai Fook decided in January to shut down as many as 15 of its 91 stores in the region this year. Sa Sa International Holdings Ltd., who owns a chain of grocery stores, also planned to scale back 20% to 25% of its stores in Hong Kong over the next 18 months when its leases expire, with a focus on stores in touristy locations.

It is difficult for purveyors of luxury goods like watches to easily move online because of storage issues and the fact that customers prefer to try on items before buying, among other reasons, said Lin Qinglin, chairman of Hong Kong’s oldest watch retailer Oriental Watch Holdings Ltd.

The only solution to dealing with the declining sales is to downsize and shut down stores to reduce losses, he added.