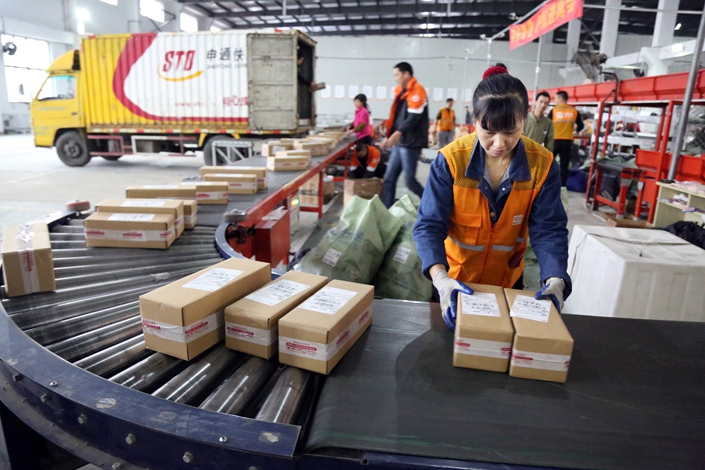 (Bloomberg) — Alibaba Group Holding Ltd. warned that the coronavirus responsible for killing more than 1,300 in China is exerting a fundamental impact on the country’s consumers and merchants and will hurt its revenue growth in the current quarter.

Alibaba, the first major Chinese technology company to report results since the epidemic emerged in December, said the virus is undermining production in the economy because many workers can’t get to or perform their jobs. It’s also changed buying patterns as consumers pull back on discretionary spending, including travel and restaurants.

The Chinese e-commerce giant made the comments after reporting strong financial results for the quarter that ended in December. Revenue surged a better-than-expected 38% to 161.5 billion yuan ($23.1 billion), while net income rose 58% to 52.3 billion yuan.

But Chief Executive Officer Daniel Zhang and Chief Financial Officer Maggie Wu were clear about the fallout from the deadly virus on employees, suppliers and merchants. Many merchants that work with the company have not been able to return to normal operations because of a shortage of workers.

“The epidemic has negatively impacted the overall China economy, especially the retail and service sectors,” Wu said on a conference call. “While demand for goods and services is there, the means of production in the economy has been hampered by the delayed opening of offices, factories and schools after the Lunar New Year’s holiday.”

Asked about the effect on Alibaba, she voiced caution about giving estimates because it’s only halfway through the first quarter.

“Overall revenue will be negatively impacted,” she said, and the hit to growth could be “significantly” negative.

Zhang said Alibaba is seeing relatively large changes in buying patterns. While food delivery is growing, areas like clothing and electronics are running into logistical problems. He warned that the core e-commerce business suffered a negative impact in the first two weeks after the holiday. Restaurant orders and travel bookings have also taken hits.

“It will present near-term challenges to Alibaba’s businesses across the board,” he said on the conference call, adding that there will also be opportunities.

Alibaba is rolling out special programs to support merchants, including lowering the fees it charges and providing subsidies for delivery personnel. Zhang said the company is trying to keep its own staff safe, including having many work from home.

“We took every effort to protect the safety of our employees,” he said.

More workers are going back to work in Beijing, Guangzhou and Shenzhen, Zhang said. Many logistics companies are also recovering their capacity over the past 12 days.

Already, China’s most valuable company has struggled to sustain growth during an economic slowdown in its home market and is now grappling also with the uncertainty of the coronavirus outbreak. While widespread home confinement is spurring demand for online services from grocery delivery to office apps to streaming entertainment, the disease is snarling nationwide transport and threatens in the long run to dent the consumer spending Alibaba depends on.

The disruption to Alibaba’s business from the virus “may be worse than feared,” wrote Bloomberg Intelligence analysts Vey-Sern Ling and Tiffany Tam in a report. “Alibaba’s sales may contract in its core China retail marketplaces and local services business in the coming quarter even if the coronavirus outbreak subsides, as logistics and production disruptions faced by merchants could take time to resolve.”

This week, the company declared a waiver of some service fees for merchants on its main direct-to-consumer Tmall platform to help those struggling with the fallout from the epidemic. That may further depress revenue in 2020.

Alibaba has shed 1.4% of its value since a broader Chinese selloff began in January, underperforming archrival Tencent Holdings Ltd., which as a mobile gaming and social media operator is better shielded in the short run from the epidemic.