In Depth: How Coronavirus Outbreak Has Hurt China’s Economy 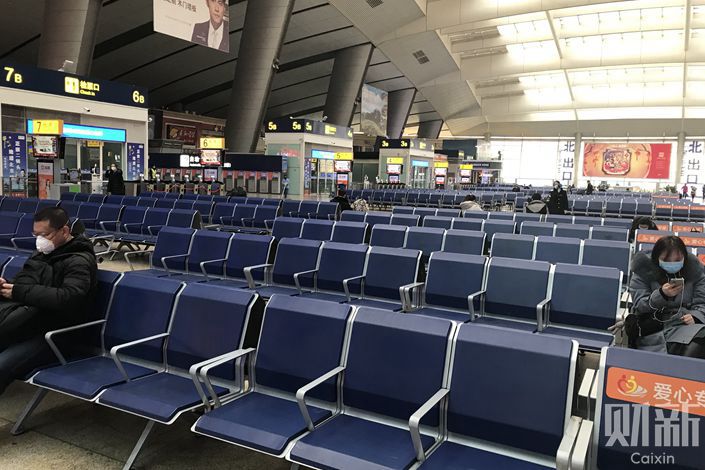 China’s transportation ministry has estimated that in the 10 days through Feb. 2, people in China took traveled 73% less than the same period last year. Photo: Ye Xueming/Caixin

More than just a health crisis, the new coronavirus epidemic has also proven to be a big headache for the country’s real economy.

Although the first cases of the coronavirus were reported at the end of December, it didn’t get taken seriously until at least Jan. 20, when the government confirmed it could be transmitted from one person to another.

In bid to curb the spread of the disease, the government has since put travel restrictions in place all over the country, disrupting logistics networks and wreaking havoc on industries from oil refining to device manufacturing.

The prices of commodities including oil, iron ore and copper have all plunged, reflecting the epidemic’s immense impact on demand from China. Take oil as an example: Brent crude, one of the world’s two main benchmark oil prices, fell 15% from Jan. 20 to Feb. 6, when it was trading at roughly $55 a barrel.

The city of Wuhan, the epicenter of the outbreak, was locked down on Jan. 23, with transportation into the city suspended, including all flights, trains and buses. Not long after, travel controls across the country went into effect. Airlines around the world have also since suspended flights to China in efforts to prevent the virus from spreading.

On the roads, public bus systems in 28 provinces had been completely or partially halted as of Jan. 30, and interprovince buses had been suspended in at least 16 provinces, according to Chinese officials.

China’s transportation ministry has estimated that in the 10 days through Feb. 2, people in China took 190 million trips by rail, road, air or sea, down 73% from the same period last year.

That change has a big impact on other parts of the economy. The transportation industry consumes as much as 70% of fuel and other refined oil products in the country, according to Pan Xiang, an oil analyst at Huatai Futures Co. Ltd. “The coronavirus epidemic has put a dent in China’s oil consumption,” Pan said.

Energy consultancy Wood Mackenzie forecast in a report late last month that China’s oil demand for the first quarter will fall by more than 250,000 barrels per day from the same period last year. Early this month, the oil cartel OPEC and its allies held a meeting to discuss committing to more aggressive output cuts than previously considered due to concerns that the coronavirus might damage global demand.

Weak demand has led to an inventory buildup in the upstream supply chain of many parts of the energy industry. Refineries in China have generally suffered rapid growth of inventory, said Zhu Fang, an analyst at the China Petroleum and Chemical Industry Federation, an industry group.

Such buildups have also become commonplace in other heavy industries, including steel and copper smelting. On Friday, China’s steel inventory hit an all-time high of 25 million tons, up 54% from the level before the Lunar New Year holiday, according to Mysteel.com, a Shanghai-based industry data provider.

The build-up has put enormous pressure on companies, according to Xu Xiangchun, senior analyst at Mysteel.com. Many steel companies have cut production at plants in provinces around the country, including Hebei and Shaanxi, Xu said.

In addition to weak demand, another issue for energy companies is constrained logistics due to travel restrictions, making it hard to deliver products, according to a company executive at one Shandong-based refinery. Smaller companies are expected to be particularly hard-hit by the coronavirus epidemic. A shortage of labor and difficulties ramping production back up after the holiday, present even bigger challenges to many smaller refineries, most of which lack abundant cash flows and rely heavily on bank loans, said the executive at the Shandong-based refinery.

Over the longer term, the coronavirus outbreak could accelerate an industrywide shakeup of many parts of the energy industry, said Xu Qiyuan, a researcher at the Chinese Academy of Social Sciences.

That is especially true for oil, where the government has for years encouraged companies to extend their businesses across the industry chain, from refining oil to making chemical products, said Pang Guanglian, another researcher at the China Petroleum and Chemical Industry Federation. Smaller players, like those in Shandong, will be squeezed out, he said.

Apart from heavy industry, other parts of the economy have also taken a hit.

Wuhan is a manufacturing hub for display panels, with factories run by industry majors like BOE Technology Group Co. Ltd., TCL Corp. and Tianma Microelectronics Co. Ltd. Many manufacturers have been hit by supply shortages since Wuhan was locked down on Jan. 23.

TCL said earlier this month that while parts of its two factories in Wuhan were operating normally, production could be interrupted because of logistical constraints and delays in raw material shipments. Chen Hu of industry research institute AVC Revo predicted that China’s display panel production will fall 10% in February owing to disruptions from the coronavirus.

China’s smartphone industry could suffer a similar level of damage. Research firm Strategy Analytics forecast earlier this month that China may see its smartphone shipments nosedive 30% in the first quarter of 2020 due to the coronavirus.

Given that 70% of the world’s smartphones are made in China, the still-spreading virus is likely to hurt the global supply chain. Take Apple Inc. At least 40% of its smartphones are made by its manufacturing contractor Foxconn in a factory in Zhengzhou, capital of Central China’s Henan province. Sui Qian, an analyst at Strategy Analytics, expects that the iPhone-maker’s global smartphone shipments could drop by 13% for the first quarter this year due to disruption of Foxconn operations as a result of the coronavirus.

Beijing has rolled out a series of financial measures in response to concerns over the virus' economic impact, with the People’s Bank of China pumping a combined 1.7 trillion yuan into the financial system on Feb. 3 and Feb. 4 to prop up the country’s markets.

Local governments have followed suit by launching their own support policies. On Feb. 4, the Shandong provincial government issued a series of financial and tax measures to help small and midsize companies, emphasizing the need to support these firms.

Still, analysts have suggested that rather than resorting to expansive fiscal and monetary policy, Beijing should instead focus on creating a better environment for companies to restart operations.

One key aspect is logistics, said Xu of the Chinese Academy of Social Sciences. The next move for the government should be to gradually remove restrictions on transportation, he said.