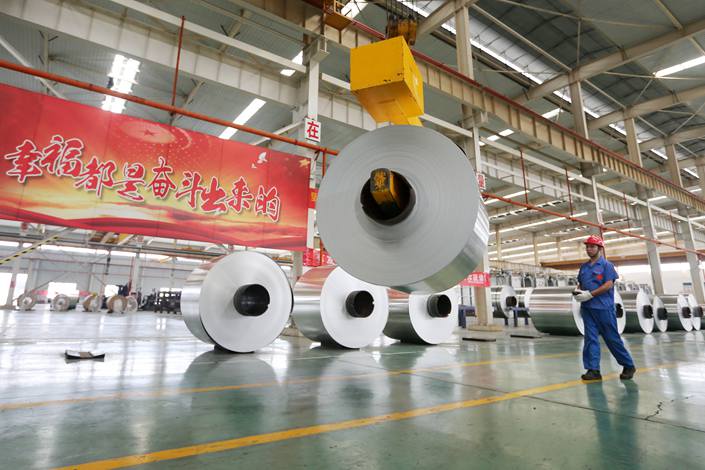 China’s manufacturing activity expanded at the fastest pace in nearly a decade as a recovery in both supply and demand continued to pick up speed in the post-epidemic period, a Caixin-sponsored survey showed Monday.

The Caixin China General Manufacturing Purchasing Managers’ Index (PMI), which gives an independent snapshot of the country’s manufacturing sector, rose to 53.6 in October from 53 the previous month. A number above 50 indicates an expansion in activity, while a reading below that signals a contraction. The October reading was the highest since January 2011 and marked the sixth straight month of expansion.

“(R)ecovery was the word in the current macro economy, with the domestic epidemic under control,” said Wang Zhe, senior economist at Caixin Insight Group.

Over the past few months, many factories across China have resumed operations as the domestic epidemic situation stabilized. Some of them have lately begun to pick up the pace of production ahead of the country’s biggest seasonal sales. Overseas demand also improved, recent export data show, though at a modest rate given the uncertainties presented by the ongoing pandemic.

The survey, which was carried out between Oct. 9 and Oct. 21, showed that total new orders placed with goods producers increased at the sharpest pace since November 2010 last month, marking the fifth straight month of expansion. Surveyed enterprises widely commented that market conditions continued to recover from the pandemic.

Growth in new export orders, however, softened significantly. Wang attributed that to the second wave of coronavirus infections in Europe and the third wave in the U.S., which have significantly suppressed overseas demand for Chinese goods.

In response to the fast growth in total new orders, manufacturing enterprises continued to increase purchases and raw material inventories. In October, the measure for quantity of purchases rose to the second highest in more than seven years.

Input costs rose at a slower rate last month, while growth in output prices accelerated, as rising demand boosted manufacturers’ willingness to charge more, Wang said. In the first nine months this year, major Chinese manufacturers’ profits grew 1.1% year-on-year, returning to positive territory after remaining in negative territory for over a year and a half, official data (link in Chinese) showed Tuesday.

Manufacturing enterprises were increasingly optimistic about the business outlook, with the gauge of output expectations for the next 12 months hitting the highest since August 2014.

But the employment measure stayed just marginally above 50 for the second consecutive month. That showed companies were cautious about hiring and made an effort to keep costs under control, the survey said.

The positive figures from October followed a strong performance in other economic indicators the month before.

“As the economic indicators for consumption, investment and industrial output for September were generally better than expected, it is highly likely that the economic recovery will continue for the next several months,” said Wang.

“But there are still many uncertainties outside of China, so policymakers need to be cautious about normalizing post-coronavirus monetary and fiscal policies,” Wang said.