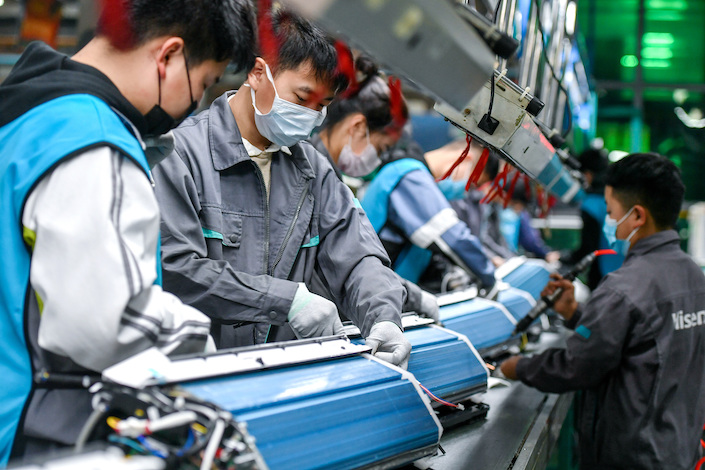 China’s registered urban unemployment rate stood at 5.6% by the end of September.

China’s job market is getting back on its feet as factories across the country return to operation with the Covid-19 pandemic largely under control. Rising consumption toward year-end is expected to create higher demand for manufacturing workers, analysts said.

Five of the top 15 occupations facing the worst labor shortages in the third quarter were manufacturing-related, reflecting rising demand as the economy rebounds from the pandemic, according to a survey published by a research unit affiliated with the Ministry of Human Resources and Social Security.

Compared with the second quarter, 19 more manufacturing-related jobs faced labor shortages during the third quarter, including those in mechanical equipment, electronic parts and auto parts, according to the survey.

The quarterly report was based on recruitment data from 102 job service institutions across China. It was published by China Employment Training Technical Instruction Center.

The changing job market is in line with China’s industrial sector revival. Data from the National Bureau of Statistics showed that profits in China’s manufacturing sector grew 1.1% year-on-year, returning to positive territory. Manufacturing of mechanical equipment, computers, telecom and other electronic gear expanded the fastest, by more than 10%, according to the bureau.

The Caixin China General Manufacturing Purchasing Managers’ Index (PMI), which gives an independent snapshot of the country’s manufacturing sector, also indicated a healthy post-pandemic recovery in September with a reading of 53. A number above 50 signals expansion.

As merchants prepare for the biggest sales season toward year-end, manufacturers have picked up the pace of production and expanded recruitment.

Wang Huan, a manager at a textile company in Hebei, said his plant is operating three shifts a day to keep production lines running 24 hours and faces a shortage of workers.