By Yu Hairong and Tang Ziyi 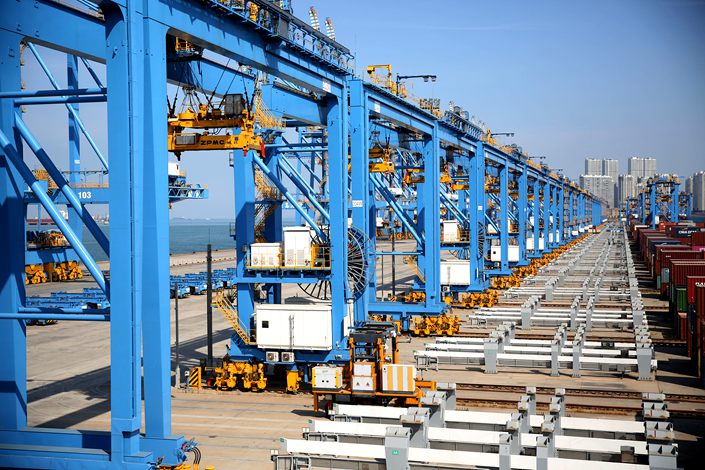 China’s top leaders will map out policies for the country’s economic and social development over the coming five years at a key meeting next week, with President Xi Jinping’s new “dual circulation” strategy likely to take center stage to help the economy overcome medium and long-term challenges.

Proposals for the five-year plan (FYP) covering 2021-2025 will be discussed at the fifth plenary session of the Communist Party’s 19th Central Committee from Oct. 26 to 29, the highest-level policy-setting event since the outbreak of Covid-19. A broad outline of the plan may be published soon after the gathering but a more detailed menu of policies is not likely to be released for weeks or even months.

This will be China’s 14th FYP since 1953. Government officials, advisers, academics and lawmakers spend months debating the contents before the plans are finalized and published, and they then need to be given final approval by the country’s top legislature, the National People’s Congress, at its annual meeting that usually takes place in March.

The plans usually cover almost every economic and social issue and set targets ranging from annual economic growth and urbanization rates to pollution control, education and research and development spending.

Here are some key themes to watch out for in the 14th FYP.

Expect to hear a lot more about some relatively new buzzwords, especially dual circulation, factor market reform and governance, along with older ones such as supply-side structural reform which first emerged in late 2015.

Far more than just buzzwords though, these are serious, well-thought-out strategies and policies to guide China’s economic development through a fundamental structural shift away from speed toward quality and sustainability. Dual circulation and factor market reform emerged earlier this year and will provide a broad framework for government ministries, officials and advisers to design and implement more detailed, specific policies that will help the economy flourish and grow in a sustainable way.

President Xi Jinping unveiled the “dual circulation” (双循环) strategy at a Politburo meeting in May. Although no concrete details of the strategy have been released, broadly speaking, it involves making the economy more reliant on “internal circulation” — the domestic cycle of production, distribution and consumption — for its development, while being supported by “external circulation,” which relates to international trade and investment and China’s links with the rest of the world.

Reform of the markets for factors of production — land, labor, capital, technology and data — is needed because the current system is distorting the price and allocation of resources and holding back growth in what’s known as total factor productivity, a key measure of an economy’s productivity, according to Wang Yiming, former deputy director of the Development Research Center, a think tank under the State Council.

The 14th FYP is particularly important for the next stage of China’s economic and social development as 2020 marks the end of the country’s decades-long goal to achieve a “moderately prosperous society (小康社会) in all respects.” This is a traditional concept dating back to Confucian times to describe a society with a functioning middle class. It has been tweaked and updated over the years and it was fleshed out with concrete goals at the Communist Party’s 18th Congress in November 2012: double gross domestic product (GDP) and per capita income from 2010 to 2020, and eradicate poverty. The targets were set to be achieved just ahead of the 100th anniversary of the founding of the party in 2021.

With the finishing line in sight, the government is now focusing on formulating strategies to cope with new challenges and objectives. Policymakers know the economy faces many headwinds. On the external front these include the ongoing Covid-19 pandemic, worsening relations with the U.S. and the prospect of technology and supply chain decoupling. On the domestic front they include cleaning up the environment, upgrading China’s industrial structure, shifting to a consumption-driven growth model, boosting incomes and reducing wealth disparity, and coping with a declining labor force and an aging population.

It’s widely expected that the 14th FYP will play down GDP expansion as a major target and focus more on the quality of growth, a recognition that the economy is undergoing a structural slowdown and that speed is no longer the most important factor in economic development.

China’s annual average GDP growth rate has slowed from 9.8% over the 2001 to 2005 period just after the country joined the World Trade Organization, to an average of 6.7% over the first four years of the current FYP that ends this year. Economists widely expect that over the 2021 to 2025 period of the 14th FYP, the pace will fall even further, to a range of 5% to 5.5%.

The GDP targets in the FYPs have bowed to the inevitable — the annual average target in the last plan (link in Chinese) was set at “at least 6.5%,” down from 7% in the 12th plan that ran from 2011 to 2015. There has been considerable debate about what an appropriate target rate should be for the next FYP and whether the GDP growth goal has outlived its purpose and should be scrapped altogether.

The pre-eminence of the GDP target, which historically policymakers deemed necessary to ensure full employment, meant that local governments focused on boosting investment, the easiest way to achieve short-term growth.

Based on past experience, continued focus on the pace of growth, especially if the target is set too high, will drive local governments to strive to meet or exceed it. That could lead to unnecessary stimulus policies which will have side effects that include a further buildup of debt and leverage, excess capacity and asset bubbles, Xu Lin, a former director of the National Development and Reform Commission's development planning department, wrote in an article (link in Chinese) in May.

Wang Tao, the head of Asia economics and chief China economist at UBS Investment Bank, expects China’s GDP growth to average only 5% in the next five years, weighed down by a series of factors including shifts in global supply chains fueled by tougher U.S. policies on the use of Chinese technology and growing pushback against globalization. On the domestic front, China will be challenged by aging demographics, elevated macro leverage, technology bottlenecks, and low efficiency in some areas of the economy.

Wang said she expects the government to either not set an explicit growth target or put forward a lower and more flexible range of around 5%.

Li Chao, chief economist at Zheshang Securities Co. Ltd., said the government should scrap the target altogether and put more emphasis on the quality and structure of economic growth. He proposed alternative goals such as the proportion of value-added output from strategic emerging industries as a percentage of GDP, the rate of urbanization, direct financing as a percentage of total social financing, or the market capitalization of China’s stock market as a percentage of GDP. The goals would serve as indicators to allow the government to track the performance of core supply-side factors, including the productivity of labor and capital, Li said.

China has for many years emphasized the importance of increasing domestic demand, especially after the 2008-2009 global financial crisis. But the focus was placed on infrastructure and property investment with far less support for household consumption, which is a more long-term and complex issue to tackle.

But now, many local governments have complained they are running out of good infrastructure projects to carry out, financing is becoming more difficult to find and the central government has imposed more stringent controls on local government financing vehicles. Concerns over price bubbles in the housing market have led to a campaign to rein in the sector that’s now lasted more than three years and shows no signs of being relaxed. As a result, increasing domestic consumption, especially private consumption — goods and services bought and consumed by households — needs to be at the forefront of the dual circulation strategy, economists say.

Private consumption as a share of GDP still lags far behind that of developed countries, although that does give China plenty of room for improvement. The latest data from the Organization for Economic Development Cooperation (OECD) show that in China, household spending as a percentage of GDP is 38.5%, compared with an average of 60% for OECD economies, 64.5% in Brazil and 67.9% in the U.S.

Catching up will involve a whole host of policies involving taxation and the fiscal system to narrow the gap between rich and poor, redistribute income away from companies toward private consumers, increase household income and give households a greater share of national income.

The government is already taking steps down this path — in October 2018, for example, the government announced an overhaul of the personal income-tax system that the cut burdens on almost 60% of taxpayers, according to Gan Li, a professor at the Research Institute of Economics and Management at Southwestern University of Finance and Economics.

But economists generally agree that much more needs to be done and the 14th FYP could well include new reforms, policies and measures to help drive household consumption. Li Shi, a professor at Zhejiang University, said (link in Chinese) the government should accelerate reform of the income distribution system, further improve the social security system and enhance government transfer payments to poor people.

One way to create demand, especially for services, is to expand the middle class, which is currently estimated at around 400 million people. The government should aim to double the size of this cohort to 800 million to 900 million, or about 60% of China’s total population, over the next 10 to 15 years, according to (link in Chinese) Liu Shijin, vice chairman of the China Development Research Foundation, a government-sponsored think tank.

China has for years implemented various strategies to promote the country’s shift up the industrial value chain and bolster its position in high-tech and other emerging sectors, notably through the Made in China 2025 initiative and the mass entrepreneurship and innovation campaign. But the drive has taken on added urgency as tensions with the U.S. have deepened and the threat of a technological decoupling rises as America imposes more and more restrictions on the sale of high-tech components to Chinese companies.

President Xi has continuously emphasized the need for self-sufficiency in key technologies, and at an August symposium (link in Chinese) to solicit input for the 14th FYP from economists and scholars, he said technology and innovation can foster new growth drivers and are key to building “internal circulation.” His remarks reaffirm expectations that China will double down on its efforts to reduce its reliance on technology from the U.S. and other economies and many analysts expect the 14th FYP to put even greater emphasis on funding for research.

For the past decade, spending on research and development (R&D) as a percentage of GDP in developed countries such as the U.S., South Korea and Japan has been two to four times the rate in China, according to Li, the economist at Zheshang Securities. Although R&D spending to GDP has been a target in every FYP since the 10th plan covering 2001-2005, the country has never achieved the figure set by the government, official data show. In 2019, China’s R&D spending to GDP ratio was 2.2% (link in Chinese), below the 2.5% target (link in Chinese) for 2020.

Wang from UBS said she expects the 14th FYP will raise the target for R&D spending to around 3% in 2025. That would support spending on basic research and cutting-edge technologies in areas such as semiconductors, software, precision machinery and advanced robot technology, as well as to strengthen intellectual property rights protection, she said.