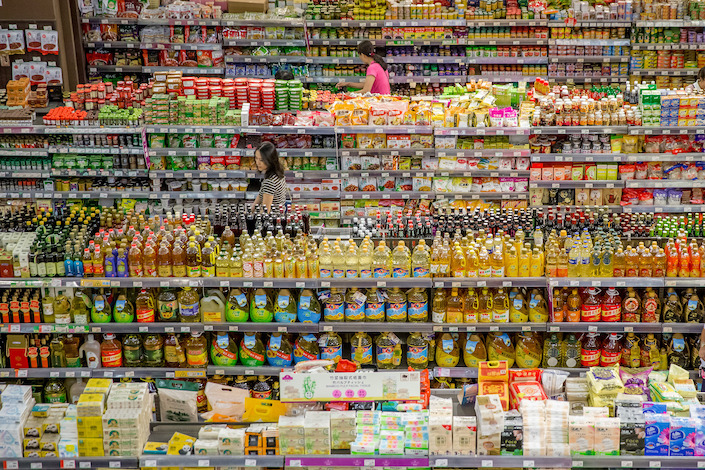 The consumption share of the Chinese economy remains extraordinarily low, accounting for 38.8% of GDP in 2019, compared with 66% in the U.S.

“Dual circulation” has recently become a buzzword on Chinese media.

Since the concept was first mentioned at a Politburo meeting in May, Chinese President Xi Jinping has repeatedly talked about dual circulation, which envisions a new economic development strategy relying less on global integration and more on expanding domestic commerce.

Meanwhile, scholars are increasingly debating whether this new model would represent a regression to the self-reliance planned-economy era from the more recent opening-up focus.

Here are five things to know about dual circulation:

What is dual circulation?

The idea first came up at a Politburo meeting May 14 presided over by Xi Jinping. At the meeting, the nation was urged to “fully bring out the advantage of China’s super-large market scale and the potential of domestic demand to establish a new development pattern featuring domestic and international dual circulations that complement each other.”

At another Politburo meeting in July, Xi said China should speed up its “dual circulation” growth model with a focus on expanding local output while drawing in foreign investment and stabilizing trade.

A meeting of the central committee for deepening overall reform Sept. 1 with Xi presiding again emphasized that accelerating the establishment of a new development pattern featuring dual circulation is a systematic deep-level reform concerning the overall situation of the country.

The Covid-19 pandemic spread with alarming speed, infecting nearly 26 million around the world, dragging the global economy into the deepest recession since World War II. According to World Bank forecasts, the world’s economic output is expected to shrink by 5.2% this year. Economic activity among advanced economies is projected to shrink 7% in 2020 as domestic demand has been severely disrupted.

Even though China is still expected to manage economic expansion of 1.6% this year, the current tough external environment means that shrinking demand for Chinese goods will surely cut deeply into growth. Even before the pandemic hit, Beijing was trying to restructure the economy as many experts warned that the export-led growth strategy is not sustainable for China in the long run.

Some interpret the emphasis on local demand as a switch to “internal circulation” and an end of China’s opening-up polices.

Meeting with a group of public and private business leaders and discussing dual circulation in July, Xi called for domestic entrepreneurs to have “a high sense of mission and a strong sense of responsibility for the country.” Meanwhile, Xi also emphasized opening the economy and treating foreign businesses equally.

“I have repeatedly stressed that China's open door will not be closed, but will only get wider and wider,” Xi told the entrepreneurs.

Though policy insiders and government advisers say it’s impossible for China to completely close its doors, many expect that a partial decoupling may be possible, especially with the U.S.

What does China need to do to make the switch?

The consumption share of the Chinese economy remains extraordinarily low, accounting for 38.8% of GDP in 2019, compared with 66% in the U.S. For Chinese consumption to broadly align with that of other developing countries, ordinary households must cover at least 10–15 percentage points of GDP at the expense of businesses and the government, which will not be easy, said Michael Pettis, a finance professor at Peking University.

This will require the deepening of domestic restructuring to expand the market orientation of the economy, increase productivity, level the playing field for the private sector, and enhance the social safety net to bolster consumption, said Wang Tao, the head of Asia economics and chief China economist at UBS Investment Bank. Wang said he expects China’s total consumption to increase by $8 trillion to $9 trillion in the next decade, roughly doubling to $17 trillion in 2030.

As part of the transition to domestic consumption, the State Council, China’s cabinet, issued guidelines in June to help exporters sell goods into the domestic market. But it is not easy for exporters to shift gears quickly as they struggle to overcome a mountain of problems from supply-side issues such as product development, distribution and taxation, to demand-side hurdles that crimp consumption, navigating the complexities of e-commerce, and meeting rapidly changing shopping habits and consumer tastes.

When will China unveil details of the new strategy?

Though much has been said about dual circulation, no details have been given on the specific methods of execution.

But details on the dual circulation strategy won’t be available until the new five-year plan is released during the annual parliament session in early 2021.