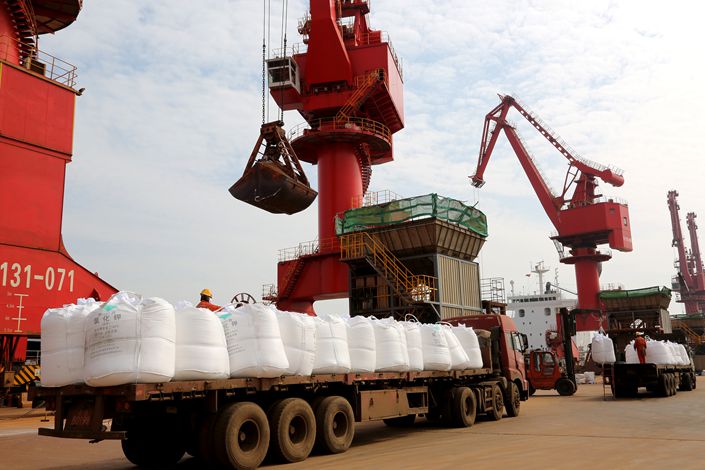 Huang Changchao is a man on a new mission. As head of the Office and School Supplies Chamber of Commerce in Yiwu city, home of the world’s biggest wholesale market, he’s more used to promoting his members’ notebooks, pens and papers to buyers in Europe, the U.S. and Southeast Asia.

But these days he’s busy organizing selling trips and trade shows to help his companies crack the China market. His latest activity was a trade fair on July 11, where wholesalers from across the country were invited to look at what his members had on offer and hopefully sign some deals. All of their travel, food and lodging requirements were arranged by Huang himself. Although his hopes weren’t high in the current economic climate, the value of deals signed at the three-day fair amounted to 613 million yuan ($87.6 million), almost the same as last year and better than Huang had expected.

The chamber’s activities are a reflection of a new, and possibly permanent, reality — China’s massive export machine is sputtering. In the decade since joining the World Trade Organization in December 2001, China’s share of global merchandise exports surged from 4.3% in 2001 to 10.7% in 2011, according to World Trade Organization (WTO) data. But since then, the figure has climbed only slowly, reaching 12.8% in 2018, suggesting the country is reaching its peak in terms of market share gains. In addition to this structural shift, China has been hit by the perfect storm of slowing global growth, trade tensions with the U.S., deglobalization, and now the fallout from the Covid-19 pandemic.

The world’s biggest exporting nation saw overseas sales drop 6.2% in the first six months of this year as the global economy ground to a halt as the coronavirus swept across the world. The WTO projected in June that even under a relatively optimistic scenario, the volume of world merchandise trade in 2020 would contract by 13%, and in a worst-case scenario could sink by as much as 32%. But even before the pandemic struck, export growth was slowing — shipments rose just 0.5% in 2019 in U.S. dollar terms, down from 9.9% in 2018 and 7.9% in 2017.

Recognizing that the days of 20% plus export growth are over, the government has dusted off an initiative it tried out in 2009 during the global financial crisis – encouraging foreign trade companies to change strategy and switch their focus to the country’s 1.4 billion consumers.

At a meeting of the Communist Party’s Politburo Standing Committee on May 14, leaders stressed the need to “give full play to the country's ultra-large-scale market advantages and domestic demand potential, and build a new development pattern that promotes both domestic and international cycles.” Since then, this phrase has been refined into the “gradual formation of a new development pattern with the domestic cycle as the main body and the domestic and international dual cycles mutually promoting each other.”

The meeting stressed further deepening the supply-side structural reform and leveraging the advantages of China's super-large market and domestic demand potential to create a new development pattern where domestic and foreign market can boost each other.

In June, the State Council, China’s cabinet, issued guidelines to help exporters sell their goods into the domestic market and “tide them over during the current difficulties.”

With no foreign-exchange risks, geopolitical tensions, trade protectionism, standards, or cultural and language barriers to worry about, such a shift in strategy would look to be a slam dunk. But it is not easy for exporters to shift gears quickly into what is in effect a brave new world. Interviews with exporters, analysts, and local government and trade officials, tell the story of companies struggling to overcome a mountain of problems from supply-side issues such as product development, distribution and taxation, to demand-side hurdles that crimp consumption, navigating the complexities of e-commerce, and meeting rapidly changing shopping habits and consumer tastes. Their experiences highlight the vast gulf between selling to foreign markets and to a domestic audience that many companies are ill-equipped to bridge.

Chinese exporters have traditionally flourished by manufacturing huge volumes of goods ordered by their customers, with little need to think about product research, design, brand development, packaging, product standards, sales and marketing, and distribution. But when it comes to selling into the domestic market, they have no one to fall back on and have to do all the work themselves, a daunting task for many companies who have little idea where to begin.

Product design is one example. Many manufacturers are at loss when they turn to designing products, according a report (link in Chinese) on the digital transformation of manufacturing released in May by the Ministry of Commerce’s department for promoting the development of the circulation industry. “Companies need to undertake comprehensive customer research to provide an accurate assessment of consumption trends, but this is difficult for many manufacturing and processing enterprises who lack data and analysis capability,” the report said.

This is especially an issue for consumer goods such as clothing and footwear, where it’s difficult to just switch into the domestic market, said Li Xiaoying, deputy general manager of Guangdong Silk-Tex Group Co. Ltd., a textile- and garment-maker based in Guangzhou. Europeans and Americans have different demands and usually have different design teams to respond to customer needs, Li said, but if a company switches to domestic sales, it has to design specifically for the Chinese market.

Zhang Wenjie, general manager of Desay Group Co. Ltd., one of the country’s biggest footwear-makers, said European and American feet shapes are different so shoe designs need to reflect that. “We really can’t sell these types of shoes in China,” Zhang said. “They have to be re-modelled to take into account the different shape of Chinese feet.”

Doing business in China can often be more expensive than exporting, making the domestic market less attractive for overseas-focused manufacturers. Getting paid is one problem. The most common payment mechanism for foreign trade is a letter of credit, a document from a bank guaranteeing that a buyer’s payment to a seller will be received on time and for the correct amount. If an exporter needs money urgently, it can borrow against the letter of credit.

But when selling in China, manufacturers often wait for months, or even a year to receive payment after delivering their goods, several business people involved in foreign trade told Caixin. Those delays tie up large amounts of working capital. “If you do business in the domestic market, you use your own money to produce, and then you have to wait for your customers to sell the goods before they pay you,” Li Xiaozhong, the general manager of Guangzhou Panyu Juda Car Audio Equipment Co. Ltd., a manufacturer of car audio equipment.

Selling in China can also land manufacturers with higher tax bills. Exporters pay few taxes and fees if they have the all the required documents because they benefit from export tax rebates. But in the domestic market, manufacturers need to pay value-added tax and other taxes and fees, Li Xiaozhong said. Just the cost of doing business in China can work out higher than the export prices of the products being sold, he said.

Although the government has cut swathes of red tape for businesses over the years, bureaucracy is still a problem. The process of just getting through the door is time consuming and costly. Manufacturers need to change their business registration information, apply for permits to produce for the domestic market and obtain compulsory certificates for their products.

A company producing air conditioners, for example, needs a certificate for each type of air conditioner turned out from the same production line. But for exports, the company only needs one certificate to cover all of them, said Li Xiaoying from Guangdong Silk-Tex.

The central as well as local governments are trying to unblock these bottlenecks. According to the June guidelines issued by the State Council, by the end of 2020, manufacturers whose products are based on foreign standards and can meet Chinese quality standards will not have to apply for domestic certification and only need to make a declaration of compliance for goods that do not require a China Compulsory Certificate (CCC) mark. However, many products, including some electronic, automobile and children’s products, will still need to apply for the CCC.

Even if companies can deal with the supply-side challenges, getting their goods in front of the consumer and selling them is fraught with difficulty.

Lack of sales and distribution channels is a key constraint and many foreign trade company executives interviewed by Caixin listed this as their biggest pain point. Exporters have traditionally sold to large wholesalers in international markets and have no experience or links with the Chinese market.

Most exporters either have no brands of their own, or if they do, they have very little recognition among brand-conscious Chinese consumers. “Building a brand is like throwing money into a bottomless pit,” Li said.

Some local governments are trying to help manufacturers find buyers through online trading platforms. The commerce department in Dongguan, a major export hub in Guangdong province, said it had set aside 50 million yuan so far this year to help local foreign trade companies find buyers through the major e-commerce platforms.

But many manufacturers complain that online sales have been lackluster so far and that they just don’t have the manpower or the expertise to focus on building an online presence. The costs of using these platforms can also be onerous for many smaller companies.

The manager of a stationery company told Caixin that a number of e-commerce teams had contacted him to discuss opening a presence on their platforms. “JD asked us to pay 40,000 to 50,000 yuan for a place on its platform, and I don't know why we have to pay that much,” the source said, adding that the number of online transactions has not been impressive so far.

The government’s campaign to help exporters break into the domestic market is in its infancy, but early signs are not encouraging. In a survey of 200 Yiwu-based foreign trade enterprises carried out in late June, only 20% said they intended to switch their focus to domestic sales, with the remaining 80% planning to try and ride out the export slump.

Li Xiaozhong’s company is one of them. Since June, the U.S. and Europe have started to ease their Covid-19 lockdowns and the company is already gearing up for the Christmas season, Li said. Orders are coming in, production lines are running at full capacity and there’s a shortage of workers. “I’m not even thinking about switching to online sales or to the domestic market,” Li said.