In Depth: China Eases Off Rules That Have Strangled Mainland’s Offshore Trade 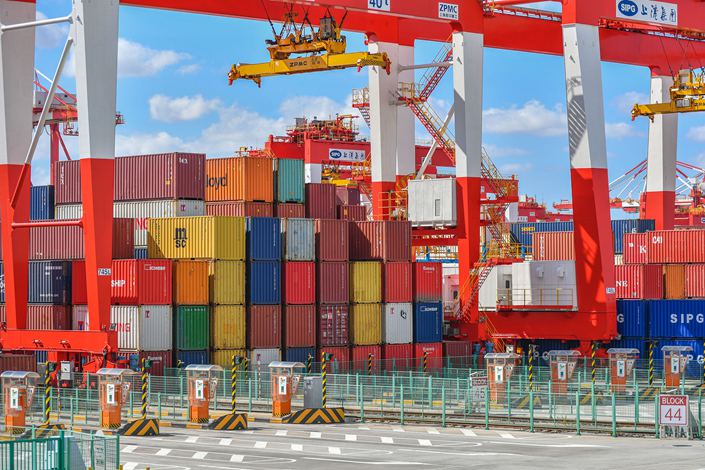 After being held back for years by a crackdown on inflows of speculative cash disguised as offshore trade payments, central regulators are loosening their grip on the business to help Shanghai lure multinationals and compete with hubs like Hong Kong and Singapore to reroute global capital through the Chinese mainland.

Chinese authorities are already signaling their openness to rule changes that would make it easier for Chinese companies to do more offshore trade. At a ribbon-cutting ceremony on April 13 for an offshore trade service center in Waigaoqiao, a senior foreign exchange regulator signaled strong support for the business.

The goal is to win a bigger piece of the region’s offshore trade business, an endeavor in which specialized firms in global financial centers handle the money — but not the goods — in the complex web of transactions between companies from different countries that has come to define the globalized trading system.

For example, a company registered in Shanghai’s Waigaoqiao Free Trade Zone (FTZ) might handle all the contracts, payments, logistics, insurance, and financing arrangements for a multinational company looking to buy raw materials from Thailand, send them to Vietnam for processing and then sell end products to Japan. Under this arrangement, multinationals can take advantage of tax breaks and other incentives available in free trade zones while settling all their payments in a single location.

Offshore trade accounts for much of the business done in major hubs like Singapore and Hong Kong, but remains marginal in Shanghai and other parts of the Chinese mainland, due in large part to suffocating regulatory controls. Waigaoqiao’s import and export trade exceeded $150 billion in 2019, but the zone only did $2 billion in offshore trade, according to Pan Qiang, a deputy head of Industrial and Commercial Bank of China Ltd.’s Shanghai municipal branch.

By comparison, Hong Kong did offshore trade in goods valued at HK$4.8 trillion ($619.3 billion) in 2018, accounting for more than a half of the city’s total trade value that year, according to Caixin’s calculation based on the latest data from Hong Kong’s Census and Statistics Department.

Revamping the rules for offshore trade would make it easier for companies registered in Shanghai’s FTZ to get a bigger piece of this multibillion-dollar business. “The volume of capital involved, especially in commodity trade, is huge,” one industry insider told Caixin. “Circulating and settling that capital locally is a very attractive cake for any region.”

Bumps in the road

Originally a major center for processing trade and transshipment, the zone has struggled to keep up with new developments like offshore trade.

Carl Zeiss (Shanghai) Co. Ltd., a subsidiary of multinational lens manufacturer Carl Zeiss AG, was among the first companies to get into offshore trade in Shanghai. In 2015, the company began buying products from its German parent for resale to clients in Hong Kong and Taiwan, Xie Lei, chief operating officer of the subsidiary, told Caixin.

Just one year later, it encountered a major hurdle when China’s top forex regulator stepped up oversight of offshore trade. The State Administration of Foreign Exchange (SAFE) imposed strict regulations to stop companies from using fabricated offshore trade orders to bring cheaply borrowed foreign currency into China for investment in domestic markets, which authorities feared would inflate the prices of property, stocks and other assets on the mainland.

In 2016, SAFE urged banks (link in Chinese) to confirm the authenticity of companies’ offshore trade orders, reviewing contracts, invoices, bills of lading and warehouse receipts for the goods one by one, before letting companies receive money or make payments. Enterprises who were unable to offer these documents on time would be temporarily blacklisted.

According to Xie’s recollection, foreign exchange controls grew so strict and the process of payment and settlement was so slow that Zeiss could no longer operate there and was forced to move its legitimate offshore trade business to Hong Kong.

That’s now set to change. National regulators have finally admitted that the 2016 clampdown may have been an overreaction.

Authorities in the Shanghai FTZ, which have seen offshore trade as a potential engine to boost future development since it was established, have been lobbying the central government to give more leeway to companies ever since the rigid regulations forced a wave of multinationals to move their offshore trade business elsewhere.

In 2018, local regulators in Shanghai rolled out a pilot program to simplify tedious review procedures for a subset of qualified companies, and the companies themselves have suggested that regulators could allow banks to review electronic versions of trade contracts.

Although SAFE hasn’t revamped the 2016 regulations, a senior foreign exchange regulator said that it would encourage financial institutions to offer efficient and convenient services to companies that can prove their offshore trade business is authentic and compliant.

Xie said he is looking forward to implementation of such policies, but he also hoped such regulations would remain consistent in the future because it could be difficult for enterprises to survive if the rules changed willy-nilly.