In Depth: Despite Attempts to Lure Them Away, Multinationals Aren’t Leaving China 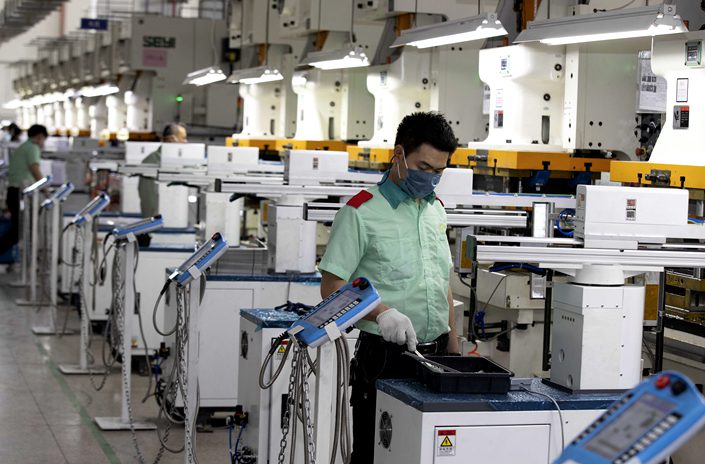 Covid-19 won’t change the fact that China is the “factory of the world” and the “the market of the world,” said Michiaki Oguri, managing director of the Shanghai office of the Japan External Trade Organization.

The shock of Covid-19 has led many countries to rethink the extent to which they rely on Chinese factories for essential goods.

This trend is not new, and has previously been given added impetus by U.S. President Donald Trump’s trade battle with China over the last two years. However, the pandemic has starkly revealed the world’s reliance on Chinese manufacturing and given more ammunition to those who want that to change.

Though for now, these calls have fallen on deaf ears in boardrooms in Japan, Europe and the U.S. Recent company announcements and surveys performed by several business groups in China show that the country is still an attractive choice.

Besides its well-known advantages in labor, infrastructure and industrial clusters, another major reason multinationals want to make things in China is that the country is increasingly also a major market for their products, experts said.

One of the major voices calling for companies to diversify away from China is White House National Economic Council Director Larry Kudlow.

Shortly after the Japanese government unveiled a 243.5 billion yen ($2.3 billion) initiative to reform supply chains — including money to assist firms in bringing production back to Japan or moving it to Southeast Asia — Kudlow suggested at a Fox Business Network event that Washington could pay American companies’ “moving costs” to bring their manufacturing back to the U.S.

That one-two punch made headlines in the Chinese media, leading many to fear that China could see an imminent exodus of multinational firms.

It was surprising to see the Japanese policy making bigger waves in China than in Japan, said Michiaki Oguri, managing director of the Shanghai office of the Japan External Trade Organization, a pro-trade and investment group affiliated with the country’s Ministry of Economy, Trade and Industry.

The sectors targeted by the Japanese incentives include personal protective equipment (PPE) like masks, suits and ventilators. As part of the first tranche of incentive payments, companies could get at least 65% of the costs of setting up a new facility in Japan reimbursed.

Producing PPE locally has become a political priority since the pandemic broke out, when the country experienced a shortage of masks as China exported fewer of them due to domestic demand amid its own Covid-19 outbreak.

Besides medical equipment, other sectors included in the incentive package such as automobiles and electronics also faced supply chain issues as China shut down much of its logistics network to control the disease. Electronics giant Panasonic briefly stopped taking new orders from customers due to a shortage of some components.

Not keen to move

However, Oguri said Tokyo’s policy has been misinterpreted as it was not designed to target any specific country, though China is expected to be the most affected.

Oguri said that as far as he can tell, most Japanese companies are not enticed by the policy. The only thing that firms care about is profitability, he said. The main beneficiaries of the policy will be companies that had already planned to move out of China due to rising labor costs, he said.

Recent surveys of Japanese companies with facilities in China support Oguri’s argument. For example, a joint survey conducted from April 2 to April 10 by Japan’s consulate in Guangzhou and the Japanese Chamber of Commerce of Southern China found that only 2.9% of surveyed firms are planning to move their business out of China due to the virus.

Of the 350 Japanese companies covered by the survey, nearly 91.7% said they don’t have any plan to move for any reason, up from 84.8% in a February survey. This result may show that some companies made, and then dropped, relocation plans as the center of the pandemic’s gravity shifted outside the country.

European and U.S. businesses in China have a similar attitude.

For example, a recent survey jointly conducted by the American Chamber of Commerce in China and PricewaterhouseCoopers showed that most American companies currently have no plans to move their supply chains or procurement activities outside China and are now focused on risk management.

Kudlow may be keen on luring U.S. companies back home, but other factors besides “moving costs” are at play including infrastructure, labor, and industrial clusters, said Ker Gibbs, president of The American Chamber of Commerce in Shanghai.

Even at the height of the Sino-U.S. trade war, China’s appeal as a manufacturing hub for U.S. businesses has not faded and the direct impact of the coronavirus pandemic on Chinese manufacturing remains limited, industry experts said. However, Covid-19 may push more companies to pursue a “China +1” strategy to diversify their supply chains, they said.

The American Chamber has long encouraged its member companies to also set up factories in other part of world such as Southeast Asia and Mexico in case of a disruptive event, said Gibbs.

For European businesses, Covid-19 has been a “wake-up call” that alerted them of the need to ensure that they can source supplies from multiple countries said Knut Alicke, a supply chain expert at consultancy McKinsey. Also, companies may need to boost their inventories in preparation for disruptions from unexpected events, Alicke said.

The world’s dependence on China for medical supplies has been a particular point of contention.

China makes most of the world’s medical supplies and medicine raw materials. For example, the U.S. imports 40% of its generic drugs from India, which in turn sources 70% of the raw materials from China, according to public government information.

Alicke said a possible future “balkanization” of the supply chain system may start in sectors such as the medical industry, so countries are less reliant on India and China.

Instead of worrying about companies leaving, China should create a better and fairer environment for multinationals in the country. Companies would welcome more regulations like the Foreign Investment Law, which was implemented early this year, said Oguri.

As China has largely brought the virus under control, Japanese companies have already begun to ramp up investment. For example, in April, probiotic drink brand Yakult Honsha Co. Ltd. announced that it would invest 300 million yuan ($42 million) to set up a new factory in Wuxi, East China’s Jiangsu province.