By Chen Lixiong and Tang Ziyi 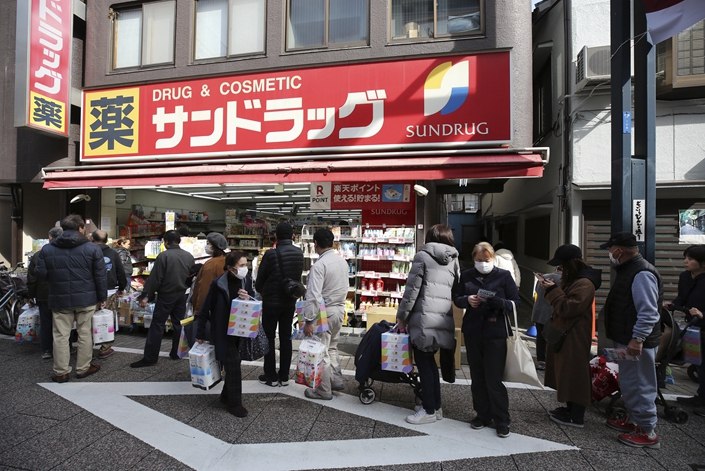 People line up to buy masks in Osaka, Japan, on Feb. 8.

In the wake of trade disruption due to the coronavirus pandemic, Japan has unveiled a 243.5 billion yen ($2.3 billion) plan to reform supply chains, including subsidies for Japanese companies that bring manufacturing home.

The national government will offer subsidies to firms that relocate production of items now mostly made overseas, according to a document (link in Japanese) posted on the website of the country’s Cabinet Office. Also, the government will provide financial support to companies that move the manufacture of some key medical products to Japan — such as masks, ventilators, protective suits and extracorporeal membrane oxygenation machines, a lifesaving tool used to support patients with severe organ failure.

The plan, adopted at a cabinet meeting Tuesday, is part of a 108 trillion yen stimulus package that also mentions other supportive measures to combat the virus.

Although some believe this move mainly aims at facilitating Japanese firms’ exit from China, the plan didn’t mention Japan’s neighbor. China dominates worldwide medical supply manufacturing and plays a major role in supply chains for many other key goods.

China’s coronavirus outbreak, and its subsequent extension of the Lunar New Year holiday and nationwide travel restrictions, had a major impact on the country’s manufacturing sector and therefore global supply chains. One of the knock-on effects was a severe shortage of face masks in Japan, which imports about 80% (link in Japanese) of its masks, mostly from China. Though the Japanese government has implemented policies to ramp up local production, they have yet to have a significant effect.

Also, several major carmakers, as well as electronics firms such as Panasonic Corp. and Canon Inc. suffered supply chain disruptions. Japanese Prime Minister Shinzo Abe said (link in Japanese) at a government meeting on March 5 that due to concerns about Japan’s supply chains in countries including China, the government will attempt to move back to Japan the manufacturing of high value-added products highly dependent on a particular country.

This plan may have been influenced by U.S. moves to encourage American manufacturers to leave China, said Toshiya Tsugami, a researcher with policy think tank the Japan Institute of International Affairs.

However, Ke Long, a researcher with think tank the Tokyo Foundation for Policy Research, wrote in a column (link in Japanese) published Thursday that it is unlikely that multinational companies would ignore China’s advantages and rashly move production to Southeast Asia or elsewhere.

Ke said that there are no countries that can replace China in terms of manufacturing at present. He said China has gradually become a key market for companies across the globe, and no other country can match the country’s supply of skilled workers and transportation infrastructure.