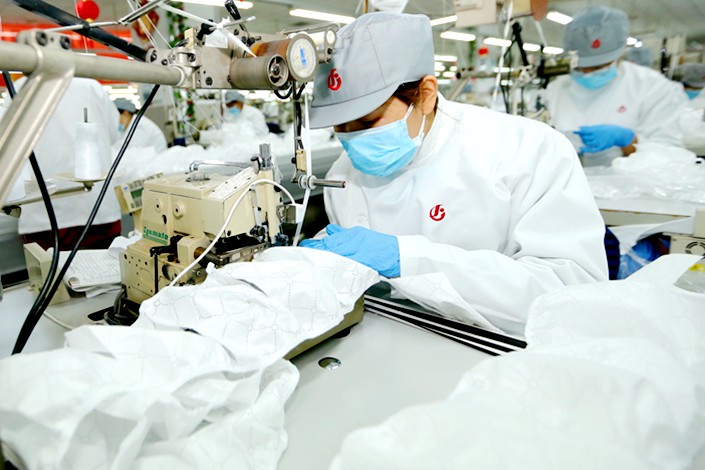 It was the morning of Jan. 20, and Li Li, owner of a surgical mask maker in the city of Xiantao of Central China’s Hubei province, was starting to worry.

Three days earlier he had shut down operations early to let his workers travel back to their hometowns for the Lunar New Year, China’s most important holiday when people typically travel home for family reunions.

But now something was clearly happening in his home province. Earlier in the day he had heard that cases of an “unexplained pneumonia” in the nearby city of Wuhan had spiked. Word of the mysterious illness had already circulated for a month, and Li had sent people there to check the situation.

He decided to go ahead and let his workers go early after being assured by officials that the illness was “preventable and controllable.” But on this particular morning, Li felt a sense of unease after receiving a string of phone calls from people suddenly wanting to buy his surgical masks.

Far from being preventable and controllable, the illness — caused by a new coronavirus called Covid-19 — was quickly confirmed to be capable of human-to-human transmission, and has gone on sicken tens of thousands in China and around the world, killing more than 2,000.

As China scrambled to contain the epidemic, entrepreneurs like Li quickly found themselves swamped with demand for their medical supplies, from surgical masks, to disinfectants and protective suits.

Ensuring sufficient supply of these items has been one of the biggest behind-the-scenes challenges in the fight to contain the coronavirus. The task has been especially critical for hospitals in Hubei, the stricken province now mostly under lockdown at the epicenter of the outbreak.

Producing such items was a challenge by itself, not only due to labor shortages but also because such products are often made of highly specialized materials. Once products were made, getting them into the province was another major issue due to travel restrictions installed to contain the spread of the disease. Other issues also cropped up, such as counterfeiting and price manipulation.

Hospitals in China have been dealing with shortages of key items used to protect against infection since the outbreak exploded in late January. Many have posted online letters appealing for donations, while doctors in some could be seen wearing diapers in the place of protective suits. Repeated use of surgical masks meant for one-time use has also become common.

Realizing the gravity of the issue, the Ministry of Industry and Information Technology (MIIT) issued seven notices from Jan. 21 to Feb. 3 ordering provincial governments to better coordinate production efforts of such supplies.

Many such producers had closed or sharply scaled back production when the notices were issued, as employers like Li let their workers travel home for the holiday. Following the appeals, executives have called back workers to restart business earlier. In Li’s case, he offered triple pay for his staff to entice them back early.

Employees are also eager to help, said Zong Guanghui, general manager at a Guangzhou-based company that makes protective garments including N95 high-protection surgical masks. “As the epidemic continues, many of our staff have expressed their understanding,” Zong said.

Ma Quanjian, chief executive of Huaxi Sanitary Materials Co. Ltd., based in Central China’s Henan province, decided even earlier not to shut down his business after receiving a surge of orders before the holiday. Instead, on Jan. 19, the day the company was previously planning to close, Ma added two additional lines to deal with the surge.

“We will directly supply hospitals, prioritizing those in Wuhan,” Ma said. After adding the two new production lines, his company was able to boost its output 50% to up to 1,500 units a day.

Other textile manufacturers with no previous experience in the space have also jumped in to help, including Shanghai-listed firms Shuixing Home Textile Co. Ltd. and Jiangsu Hongdou Industrial Co. Ltd. Even firms like carmakers have refit production lines to make medical supplies.

A major bottleneck in producing such supplies has been raw materials, whose prices have soared due to a spike in demand.

For example, rubber bands that are a major component of surgical masks saw their price rise eight-fold to 8,000 yuan ($1,136) per ton, said a spokesperson for a company based in Xiantao, one of China’s four manufacturing hubs for the product.

Another raw material in short supply has been melt-blown woven fabric, a key component in the production of N95 masks, which keeps out things like spray and particles. That supply would be hard to rapidly increase due to the complexity of the production process, said Ji Jianbing, a researcher at the China Nonwoven and Industrial Textiles Association.

Producing protective suits is even more complicated, making rapid increases in output difficult. After the fabric for such suits is produced, it must be sent to the local drug agency for testing, with a cycle of about one week. After passing the test, the factory must make a sample suit and undergo more testing before it can mass produce products for sterilization and sale. When all is said and done, a single protective suit could take half a month to produce.

Many newcomers that are trying to help are unaware of such complex processes, said Zhuang Xiaoxiong, president of the China Textile Academy, which was asked early this month to coordinate national production efforts for protective suits. Adding to the delays, testing agencies are often too busy to take orders from these newcomers, Zhuang said.

Despite the obstacles, progress is being made thanks to company actions and government support. Daily mask production rose to over 20 million units as of Feb. 17, up from about 8 million on Jan. 23, according to official statistics. The country’s protective suit production rose from less than 10,000 units on Jan. 28 to 40,000 units by Feb. 7.

As it tries to rapidly ramp up production, the government also had to battle with other issues such as counterfeiting. A volunteer group led by several Chinese students studying in the U.S. and Canada filed a police report after being told that 50,000 N95 masks they had purchased from a Guangzhou-based company were actually fake.

The government has also had to deal with issues like product hoarding and profiteering. A box of surgical masks that cost only 100 yuan before the outbreak was being sold by the manufacturer for 2,500 yuan by Feb. 2, according to a person from a Shenzhen-based manufacturer. Over that time the cost of producing a mask soared from just 0.8 yuan per piece to 2 yuan, the person said.

Local governments have intervened to try to contain such problems. For example, such governments took responsibility for procurement and allocation of products used in their hospitals from Jan. 29, according to a person at a Guangzhou-based company making N95 masks. That reduced the potential for profiteering by intermediaries, company executives told Caixin.

While ramping up production has been difficult, the final step of shipping items to where they are needed most, often to hospitals in Hubei, has proven a similarly challenging task. One major problem has been simply getting enough drivers to deliver the goods.

Many regions outside Hubei have generally barred people with recent travel history to the province, or subject such people to a 14-day quarantine. Thus many drivers who delivered medical items to Hubei found themselves ordered to undergo such quarantines after leaving the province to get more goods.

To address that issue, China’s Ministry of Transport issued a notice on Jan. 31 asking local governments to relax quarantine rules for drivers shipping medical items into Hubei. Those who didn’t enter Wuhan and had normal temperature shouldn’t be required to undergo the 14-day quarantine, the notice said.

Still, that policy has largely fallen on deaf ears as nervous local authorities have stuck to original rules, said Cao Meng, CEO of the mobile logistics booking platform Chehaoyun. Cao gathered a group of drivers from dozens of logistics companies to help ship medical items into Hubei for free, only to see most of those later forced to self-quarantine, he said.

Lack of uniformity also means that policies in each locality often differ in terms of travel restrictions. That has created additional headaches for drivers who have found themselves having to navigate complicated bureaucratic hurdles put in place by each different local government.

For example, trucks shipping medical items need different passes to enter each city, said Cao. In some cases, even individual districts within one city may issue their own respective passes for drivers, he added.

Bao Zhiming contributed to the report