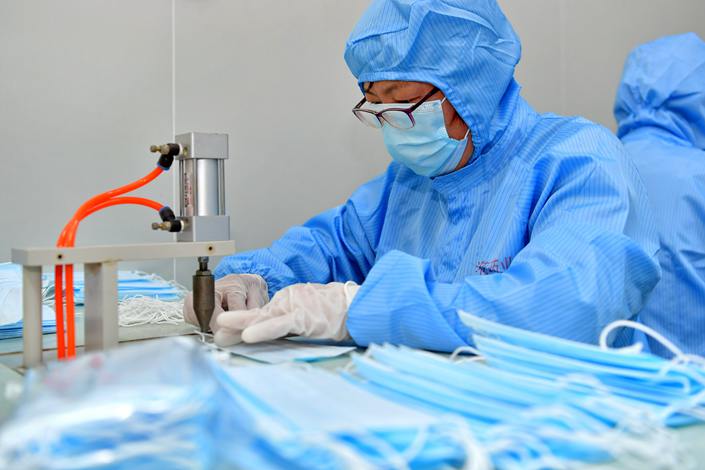 A company spokesperson told Caixin that Foxconn’s mask-production capacity could reach 2 million units per day by the end of this month. Photo: Xinhua

A number of manufacturers in China, including several automakers, have said they will refit their production lines to make medical supplies such as face masks as shortages hamper the country’s efforts to contain a still growing outbreak of a novel coronavirus.

SAIC-GM-Wuling Automobile Co. Ltd., a joint venture carmaker formed by General Motors Co. and two Chinese partners, said in a social media post (link in Chinese) Thursday that it will have 14 production lines making masks by the end of the month. The total production capacity will reach 1.7 million units per day, according to the post.

Shenzhen-based carmaker BYD Co. Ltd. is also set to refit the manufacturing facilities of one its subsidiaries in Shanwei, Guangdong province. On Thursday, its official business registration information was updated to include the production of disinfectants. A source familiar with the matter also said that it will make face masks in future. Guangzhou Automobile Group Co. Ltd. said it would also begin to make masks, with General Manager Feng Xingya saying this could help plug the gap between supply and demand for medical gear.

Contract-manufacturing titan and Apple Inc. partner Foxconn started to make masks in Shenzhen on Wednesday through its Shanghai-listed unit Foxconn Industrial Internet Co. Ltd. A company spokesperson told Caixin that Foxconn’s mask-production capacity could reach 2 million units per day by the end of this month. Foxconn said the masks it produces will be largely for internal use. Foxconn has nearly 1 million workers on the Chinese mainland, according to a company source.

Since the outbreak began in December, the coronavirus had infected more than 30,000 people and led to more than 600 deaths as of the end of Thursday. Throughout the outbreak, China has struggled with a shortage of medical gear including masks.

These manufacturers are in part responding to calls from local governments, which are offering incentives such as easing access to production licenses. For example, Feng from Guangzhou Automobile said their plans came at the demand of the Guangzhou government. State-owned Guangxi Construction Engineering Group also said it will help SAIC-GM-Wuling to refit one of its factories.

The massive spike in demand for medical gear has been a boon to manufacturers already in this area. For example, the Shandong province-based Hongyu Medical Co. Ltd., which went bankrupt in 2016, restarted production late last month after receiving a 3 million yuan ($430,000) loan from its local government.