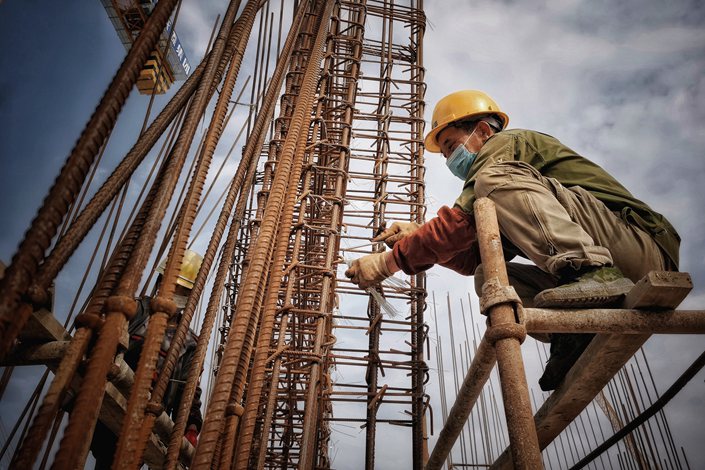 A worker at a construction site on April 26 in Putian, East China’s Fujian province.

Wang Tao is the head of Asia economics and chief China economist at UBS Investment Bank. The article, edited for length, is a two-part assessment of China’s economic future.

China is currently facing the challenges of fully recovering from the Covid-19 pandemic, worsening U.S.-China relations, a global recession, pressures of decoupling and tightening of restrictions on access to technology. Domestically, debt is set to increase significantly this year. Why should investors be interested in China? What is the glass-half-full story of China’s economy?

We think China’s persistent growth outperformance, large and expanding domestic/consumer market, continued technology upgrading and rapid digitalization, further opening to foreign investors and domestic reforms, and a bigger policy tool kit to offset shocks to the economy and stabilize the debt situation all make it an economy and market that investors cannot afford to ignore.

Growth will outpace most other major economies

China was first in and first out of the pandemic. China’s economy rebounded strongly in the second quarter of 2020 from the sharp fall in first quarter as Covid-19 was largely controlled and economic activity moved back toward normality, though retail sales and some services areas have not yet quite returned to normal levels. Exports also stayed stronger than expected thanks to supply chain resilience, strong exports of personal protective gear and increased demand for electronics.

As economic activity continued to normalize and the effect of earlier stimulus becomes more apparent, we expect growth to rebound further to 5.5% to 6% year-on-year in the second half. While sequential momentum should decelerate, the low baseline and assumption that Covid-19 will remain under control mean that GDP growth is likely to rebound to 7.6% in 2021.

Trend growth is slowing but China will remain the biggest contributor to global growth in the coming years. Over the next decade, we will see China’s trend growth slowing to 4.5% a year on average (notwithstanding a likely strong rebound in 2021), but this means China will still contribute more than 30% to global growth, as it did in the past decade.

• The working age population is declining, but labor transfer to more productive parts of the economy will continue, along with improvement in education and training.

• The per capita capital stock (and labor productivity) is still low relative to more advanced economies; it is set to increase with more investment funded by high domestic savings. Of course, it will likely be more difficult to find productive investment areas than before, so more innovation and reforms are needed, and both investment and GDP growth will be slower compared to the past.

Tech restriction matters, but GDP is likely to reach $26 trillion to $28 trillion in 2030. Taking into account further restrictions on access to technology and U.S. pressure to decouple from China, we lowered the country’s potential growth by 0.3 percentage points a year to 4.5% on average for the 2021-2030 period. The actual drag on potential growth could be as much as another half a percent a year in the next decade, depending on how tight and widespread tech restrictions will be, and how China responds to the challenges.

Rise of Chinese consumers and the domestic market

The recent official theme of “dual circulation” is meant to recognize the worsening external environment and focus more on domestic demand as an ever more important driver of China’s economic growth, in our opinion. This will require the deepening of domestic reforms to improve the market-orientation of the economy, increase productivity, level the playing field for the private sector, and enhance the social safety net to boost consumption. We expect China’s total consumption to increase by $8 trillion to $9 trillion in the next decade to reach $17 trillion in 2030.

• Consumers are more willing to spend more on services over goods, especially those related to health, self-improvement (such as sports/gym, education) and experiences

• The consumption upgrade trend is continuing despite the Covid-19 shock

• Digitalization is accelerating with a significant increase in online shopping, entertainment and other services.

In addition, the UBS 360 team sees a “new retail” revolution in China, with the online giants leveraging big data and advanced analytics to expand their offline ecosystems, and traditional offline retailers digitizing to improve operational efficiency in an ever-competitive market.