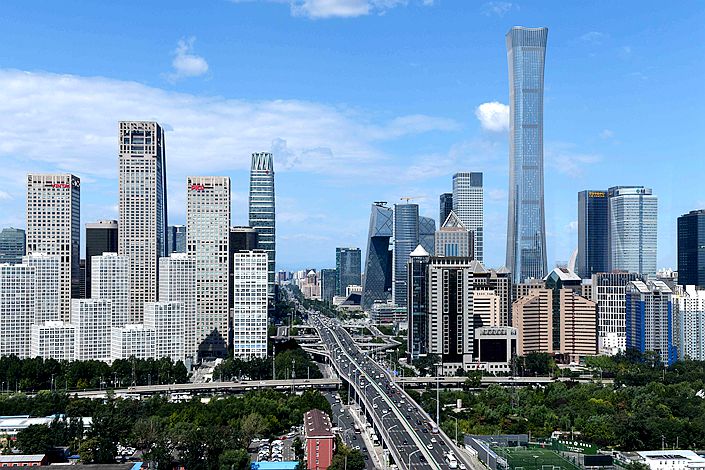 The country’s economic master plan for 2021 to 2025 will likely continue to focus on environmental protection and controlling risks in the financial and property sectors.

Wang Tao is the head of Asia economics and chief China economist at UBS Investment Bank. This article is a two-part forecast on China’s upcoming 14th Five-Year Plan.

China is scheduled to review and approve the outline of the14th Five-Year Plan (for 2021-25) in October. The final version will be released at the National People’s Congress in March. What are likely to be the key macro themes for investors?

The U.S.-China trade war and Covid-19 pandemic had a significant negative impact on China’s economy and made achieving the 13th Five-Year Plan objectives difficult. Nevertheless, most of the objectives, including those on urbanization and environment, will likely be achieved at end of 2020, except GDP growth and household income growth.

Despite a shortfall of growth this year due to Covid-19, China’s GDP per capita will likely reach $10,400 in 2020, compared to $8,000 five years ago. Moreover, China’s middle-class population already exceeded 400 million (defined as those with annual household income between 100,000 yuan and 500,000 yuan, according to the NBS), and poverty (especially in rural areas) declined significantly.

The 13th Five-Year Plan also saw the implementation of supply side reforms, which reduced excess industrial capacity, and deleveraging measures which led to tighter shadow credit regulations, faster disposal of bad loans and a stabilization of the debt to GDP ratio, though the latter will likely be undercut by this year’s Covid-19 hit and credit stimulus.

Compared with five years ago, China is now facing more challenges, especially on the external front. The Covid-19 pandemic has brought the global economy into recession, squeezed macro policy room in most economies, and amplified forces against globalization.

The U.S.-China tensions have been escalating across the board following the bilateral trade war and the Covid-19 shock this year, leading to even more strict U.S. tech restrictions on China and increasing “decoupling” pressures. As a result of both these forces, supply chain restructuring is likely to be accelerated in the coming years.

Domestically, aging demographics, elevated macro leverage, technology bottlenecks, and low efficiency in some areas remain as key headwinds for China's long-term growth. We estimate that tougher tech restrictions may take out as much as 0.5 percentage points per annum from China’s potential growth in the next 10 years, although China should remain the top contributor to global GDP growth and an attractive destination for investors

Compared with the “>6.5%” average annual growth target set in the 13th Five-Year Plan, we expect the government to either not set an explicit growth target or set a lower and more flexible (e.g., around 5%) growth target. Despite an expected rebound to 7.6% in 2021, we expect China’s growth to average only 5% in the next five years, as aging population, lower savings rate, supply chain shifts and tougher tech restrictions are expected to weigh on potential growth.

As such, we expect the 14th Five-Year Plan to emphasize fostering structural changes domestically and improving the quality of growth, along the lines highlighted by the recent “Dual Circulation” theme. This means that the 14th Five-Year Plan will likely set ambitious targets for urbanization (likely another 5 percentage points increase in the “hukou” urbanization rate), new urban employment growth (possibly another 50 million in 2021-25), increase in shares of consumption and services, improvement in social safety net, and increase in education and R&D spending.

In light of the challenging external macro environment and lower potential growth, the new five-year plan is likely to follow the theme of “dual circulation” with a new emphasis on “domestic circulation” to guide development.

The theme adds a new urgency to many existing government policies on boosting domestic demand in the coming years, including fostering urbanization, continued infrastructure investment, measures to support employment at smaller firms and improving the social safety net, and hence, consumption.

It would also require further deepening of structural reforms, or supply-side reforms, to help reshape domestic supply of goods and services to satisfy domestic demand, as well as to improve productivity and sustainability. It does not mean China will shut its door to the world, as China will likely open up further despite the rising external challenges.

After a notable 5 percentage point increase in the “hukou” urbanization ratio to 45% in 2020, we expect the government to set a further higher target at 50% by 2025, indicating an increase of over 80 million urban “hukou” residents during 2021-2025. It requires more relaxation of “hukou” restrictions in large cities and equal access to public services, which could help increase labor mobility, support urban consumption and boost productivity growth (from low to high efficiency sectors).

Meanwhile, the ongoing land reform is set to allow more rural land to enter the market directly and accelerate development of the land exchange market. It could release more land supply with lower cost and improve the allocation efficiency of the land market. Both the “hukou” and land reforms could offer some modest support for the property market.

In addition, China is now committing to a 3-year SOE reform plan (2020-22), which would include more mixed-ownership reform, divesting of state capital from competitive sectors, and increasing competition. These reforms could help level the playing field for private and foreign enterprises and improve SOEs’ efficiency and competitiveness.