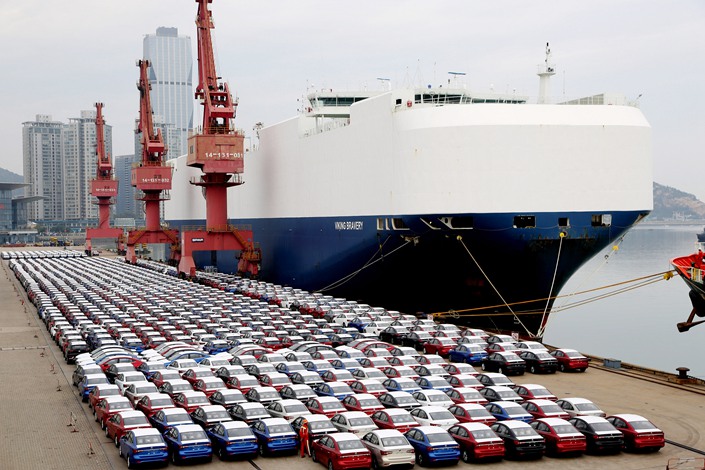 A freighter prepares Sunday to load more than 1,500 vehicles for export to Egypt at the port of Lianyungang in East China’s Jiangsu Province.

Exports of toys, lamps, suitcases, furniture and automobiles continued to improve while shipments of processing exports saw mixed performance, with ADP machines and electronic IC gaining further strength — the latter partly from a low base. Mobile phone exports shifted from 23% growth in August to a 43% contraction in nominal terms and from 14% growth to a 4% contraction in volume terms, partly from a high base. The latter may be related to the delay of iPhone-related production this year, due to the drop of mobile phone export price growth, and U.S. restrictions on products related to Huawei Communication Co. Ltd.

Meanwhile, exports of products related to the fight against Covid-19, a key source of strength in the past few months, softened slightly but remained relatively solid, with textile exports growing by 35% year-on-year and medical instruments by 31%. By country, shipments to major EMs accelerated across the board, while those to G3 markets edged down to a resilient pace.

Headline exports in the third quarter accelerated from 0.1% year-on-year to 8.8%, helped by three factors: solid anti-Covid-related shipments, demand for electronic products used for “working from home” and remote learning, and improving global demand for consumer goods.

Shipments to G3 markets accelerated to 12.3% in the third quarter. Exports to the U.S. jumped to 17.6%, partly thanks to a very low base due to additional higher tariffs, while exports to the European Union remained strong at 11.4%.

Looking ahead, China’s exports may continue to benefit from the global growth recovery, albeit at a slower pace considering the resurgence of new Covid-19 cases. That said, China will likely face rising competition from other economies as they gradually resume production. Overall, exports are expected to grow by mid-single digits in the fourth quarter.

Imports rebounded more than expected during the period, partly from a low base. September imports bounced back from shrinking 2.1% year-on-year to growing 13.2%, much stronger than the market expected. The strength carried across major trading partners and key products.

A strong September import rebound took the third quarter average growth to 3.2% year-on-year compared to a contraction of 9.7% in the second quarter, with shipments from G3 rebounding to 7.8% (19.7% in September). Imports from commodity producers also swung from a 5% contraction in the second quarter to 1.9% growth in the third quarter (8.4% in September), although import volumes of iron ore and copper ore both softened somewhat.

Improving domestic demand boosted imports of autos and auto parts, steel products and copper products. In contrast, agriculture imports, such as soybeans, meat and grain foods, moderated. China’s import recovery is expected to continue in the fourth quarter, albeit at a pace softer than September, given an expected slower acceleration of GDP growth recovery in fourth quarter.

China’s imports from the U.S. jumped to 24.7% year-on-year in September. The latest data from the U.S. Census suggests the value of U.S. goods exports to China for products in the phase one deal was $48 billion in the first eight months of 2020, or one-third of the 2020 annual target. Even though China is still increasing purchases from the U.S., it is unlikely to achieve the 2020 annual purchase target in the deal.

The U.S. chief economist at UBS AG thinks the chance of a Biden administration unwinding some of the tariffs if elected is small. It might take a more multilateral approach to trade and, as a result, U.S. policies against China may be more predictable, even though the hawkish stance will continue.

Headline foreign exchange reserves fell by $22 billion in September to $3.14 trillion. Considering a valuation loss from the strong dollar, a smaller goods trade surplus and likely stable service deficit and net foreign direct investment (FDI), estimated non-FDI capital outflow is expected to narrow a bit. In the past couple of months, despite a larger trade surplus, stronger portfolio inflows and yuan appreciation, China’s foreign exchange reserve increase has been small, while net error & omission (NEO) printed a $76 billion outflow in the second quarter.

Increased yuan-denominated capital inflows, changes in foreign exchange conversion rates, increases in banks’ own positions, and possible unwinding of the PBC’s previous forward or swap positions may help to explain the gap between the large external surplus and small reserves increase. Looking forward, a smaller trade surplus and potential increase in capital outflows should help limit both the reserve accumulation and yuan appreciation.