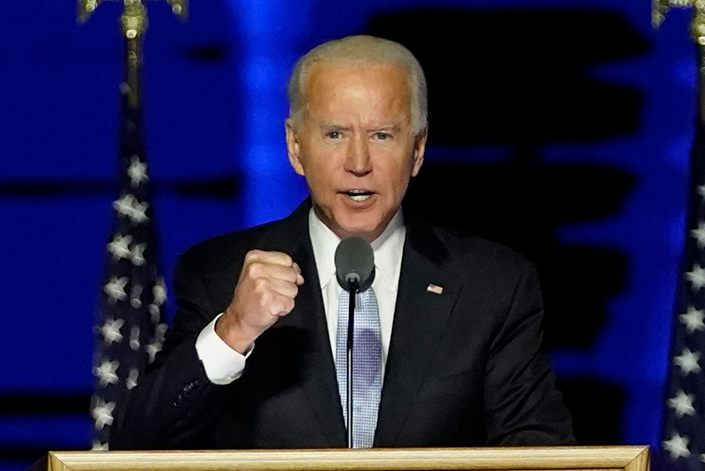 All major U.S. news networks have projected Joe Biden to be the winner of the U.S. presidential election, though the incumbent has not conceded. The U.S. senate races will only be concluded following the run-off elections in Georgia in early January. How might U.S. economic and foreign policies be different under a Biden administration and what might be the implications for China? What are the risks in the coming months?

As the UBS U.S. economics team wrote earlier, the size of Washington’s fiscal stimulus will likely differ a great deal under different combinations of the White House and Congress. On the other hand, the U.S. president has control over foreign and trade policies, which would impact U.S.-China relations and trade war. Compared to a Trump presidency with a split Congress, we think a Biden presidency with a split Congress may bring the following changes that are most relevant for next year’s economic outlook in China:

As indicated by the Biden transition plan, the president-elect wants to prioritize pandemic control and reviving the U.S. economy. However, in the scenario where the Republican Party controls the Senate, UBS U.S. economics team expects only a modest fiscal stimulus package.

As a result, they expect slightly weaker U.S. GDP growth of 2.9% in 2021. Meanwhile, the risk of U.S. imposing additional tariffs on imports from China and other countries will likely be significantly lower in 2021, which should help reduce business uncertainty and be positive for global trade.

Given the bipartisan support in the U.S. for hawkish stance on trade with China and Biden’s likely focus on domestic issues initially, we do not expect the new U.S. administration to unwind current higher tariffs on Chinese exports soon. Nor do we expect any major changes to other existing U.S. policies on China in the near term.

“We expect the two sides to engage actively in 2021, but any new deal is unlikely to be reached until end 2021 or in 2022. Before that happens, we do not expect a reduction or removal of existing US tariffs.”

Nevertheless, as indicated by key Biden advisors, the new administration is likely to take a more deliberate and multilateral approach to trade dispute. This means that U.S. trade policies may become more rules-based and more predictable, which should help lower risk premium in the market.

A comprehensive approach to competition and cooperation

It seems there is consensus among U.S. political establishment that China is a strategic competitor. According to key policy advisors to President-Elect Biden, the new administration may take a comprehensive and strategic approach to U.S.-China relations. Consequently, the Biden administration is likely to maintain a tough political stance on China, keep tight restrictions on China’s access to advanced technology, and work to bring more jobs back to America.

Meanwhile, Biden may be more open to cooperation with China on global challenges of pandemic control, climate change, and non-proliferation. We expect the Biden administration to re-establish formal communication and dialogue mechanisms with China sometime down the road, perhaps along with or after repairing relations with allies.

What are the implication for the trade deal and negotiations?

The phase one trade deal has held up so far this year despite the challenges from Covid-19 and worsening of U.S.-China relations in other fronts. Given that the numerical import targets in the trade deal have become even more unrealistic, we think China would want to renegotiate the deal. Meanwhile, the new U.S. administration may want to renegotiate to push for more structural measures in China regarding IP protection and level playing fields.

As such, we expect the two sides to engage actively in 2021, but any new deal is unlikely to be reached until end 2021 or in 2022. Before that happens, we do not expect a reduction or removal of existing U.S. tariffs.

We expect China’s GDP growth to rebound to 7.5% in 2021. As outlined in our scenario analysis, in the case of a Biden presidency with a split Congress, we think the impact of a slightly weaker U.S. growth on China will be offset by a slightly better global trade environment, leaving little net impact on growth next year.

As economic activities recover further in China, we expect domestic consumption to rebound significantly, supported by robust exports amid a global recovery. We see much of China’s tax and fee cuts expiring at end 2020 and infrastructure investment to slow modestly in 2021. We expect no change in policy rates but a slowdown in credit growth as the authorities renew focus on containing financial risks.

There are considerable short-term risks in U.S.-China relations

Before the new administration takes office on Jan. 20, President Trump and the current U.S. administration can and may still implement additional measures against China. Such measures are highly unpredictable and could lead to market volatility.

These measures could include forcing some Chinese companies to delist from the U.S. market, expanding the entity list or list of products that face export restrictions, additional geopolitical provocations, imposing additional sanctions related to Hong Kong and Xinjiang, and more visa restrictions affecting bilateral exchanges and communications. Some of the measures may be politically difficult for the next U.S. president to reverse or unwind, inflicting lasting damage to bilateral relations.

In the case of additional measures against China under the current U.S. administration in the next two months, the yuan may weaken against the dollar. However, after the new administration takes office and global uncertainty declines in 2021, we expect the yuan to appreciate again, in part helped by a weaker dollar. China’s attractive yields and continued financial market opening should help attract portfolio inflows, even as the current account surplus is projected to shrink. We expect the yuan-to-dollar rate at end-2021 to be around 6.5 partly to reflect PBOC’s increased tolerance for a stronger yuan, though the exchange rate is likely to fluctuate in a wider range than before, breaking 6.5 at times.