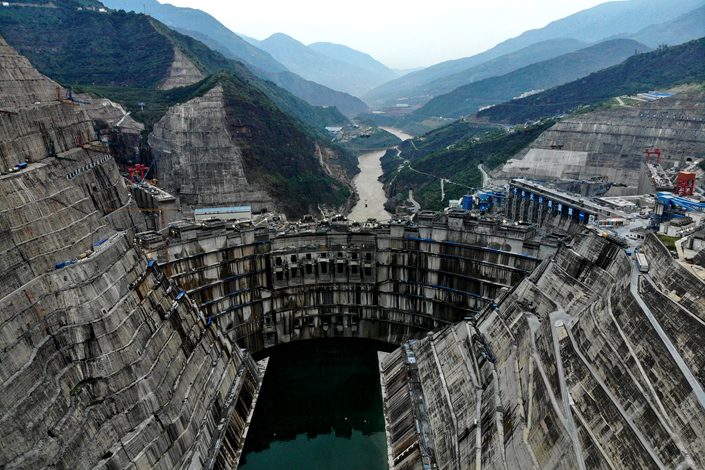 The Baihetan hydropower station, under construction in September in Liangshan, Sichuan province, has a planned generation capacity of 16 gigawatts, which would make it the world’s second-largest hydroelectric project after the Three Gorges Dam. Photo: VCG

Four of China’s five biggest state-owned electricity utilities are capitalizing on the country's red-hot “carbon-neutral bond” market, raising up to $1.38 billion in recent weeks as they race to develop renewables facilities under an ambitious national carbon-emission drive.

Together, the four power giants borrowed a total of 9 billion yuan from bonds with two-to three-year maturities, and they pledged to spend at least 70% of the proceeds to develop renewables, without identifying specific projects.

Similarly, hydropower conglomerate China Three Gorges Corp. raised 1 billion yuan through the same type of bond on Friday, according to a filing with the Shanghai Stock Exchange. The company is earmarking at least 70% of the funds for the construction of the Baihetan hydropower station, located on the upper stretches of the Yangtze River near the borders of Sichuan and Yunnan provinces in Southwest China.

The station has a planned power generation capacity of 16 gigawatts, which would make it the world’s second-largest hydroelectric project after the Three Gorges Dam.

However, the low coupon rates could dampen investors’ enthusiasm toward such bonds, according to a report by Huachuang Securities Co. Ltd. All five power companies set their coupon interest rates in a range between 3.35% and 3.5%. But these moves also reflect the government’s support for cutting companies’ fundraising costs to help them meet carbon neutrality targets, said Li Qinghe, a senior analyst at Guosheng Securities Co. Ltd.

Funds raised from carbon-neutral bonds need to be used for green projects, which include photovoltaics, wind power, hydropower or green buildings. Such bonds are subject to compulsory spending disclosures every six months, and issuers must provide assessments and certifications from third-parties to quantify their carbon emissions reductions.