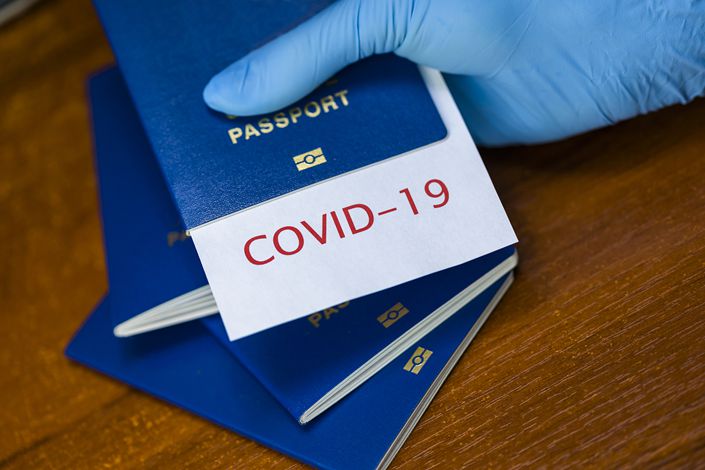 The growing number of vaccine passports on offer continue to raise questions about the security of private health information and who will set standards. Photo VCG

The electronic document takes the form of a mini-program in Tencent Holdings Ltd.’s ubiquitous WeChat app, displaying individuals’ Covid-19 test results and vaccination status, as well as the type of jab they received. It includes an encrypted QR code that can be scanned for verification in participating countries, Chinese officials said. It can also be printed.

No country is yet believed to have signed up. Late on Tuesday, Chinese state-run tabloid the Global Times published an interview with the incoming Israeli ambassador to China who signaled her nation’s intention to be the first.

The International Travel Health Certificate mini program began to appear in the WeChat apps of Chinese users on Monday. It bears the logo of a blue heart inside a globe, and is emblazoned with a slogan in red characters: “Let’s stand together and fight the epidemic” (众志成城 抗击疫情).

Users are required to supply their national identity card and passport details.

China’s Ministry of Foreign Affairs said that as more countries establish “mutual recognition” agreements for China’s health credentials, the vaccine passport will play an important role in promoting safe and orderly travel between countries, according to the state-run Xinhua News Agency.

It was also not clear whether foreigners will be required to use the same electronic document to enter China once border restrictions ease.

Chinese Foreign Minister Wang Yi announced the vaccine passport’s imminent launch Sunday at a foreign policy press conference on the sidelines of China’s annual “Two Sessions” political meetings, in which he also stressed that China was willing to discuss the feasibility of mutual vaccine recognition with other nations. He said China’s vaccine passport would “fully protect personal privacy.”

Such questions — alongside concerns about whether such documents will bring about discrimination based on health status — underlie global efforts to track who has been vaccinated against Covid-19, as the prospect of post-pandemic international travel comes within reach.

European Commission President Ursula von der Leyen announced this month that the European Union was developing a “digital green pass” that would contain proof that a person has been vaccinated, as well as the test results for those who had not been. The bloc’s executive is expected to publish draft legislation on the pass by March 17. “It will respect data protection, security & privacy,” von der Leyen said in a tweet announcing the move.

“These are honeypots — the mother lode (of health information),” Bahmanyar said. Though the pandemic had changed community expectations, issuers would still need to be “super transparent” about whether the data could be used for commercial or other purposes, and when it would be destroyed, for consumers to have confidence.

Sixty-eight countries have reported they are using BioNTech/Pfizer’s mRNA vaccine, more than for any other shot. Oxford/AstraZeneca’s viral vector vaccine is being used in 55 countries. Sinopharm vaccines developed by the firm’s Beijing and Wuhan affiliates are being used in 15 and two countries, respectively, according to officials in those countries. Sinovac’s Coronavax is in use in 11.

China has maintained strict border controls during the pandemic, shutting out people from severely affected countries and ordering entrants to undergo mandatory quarantines. Talk of a vaccine passport was seen in some quarters as evidence that those policies could be relaxed.