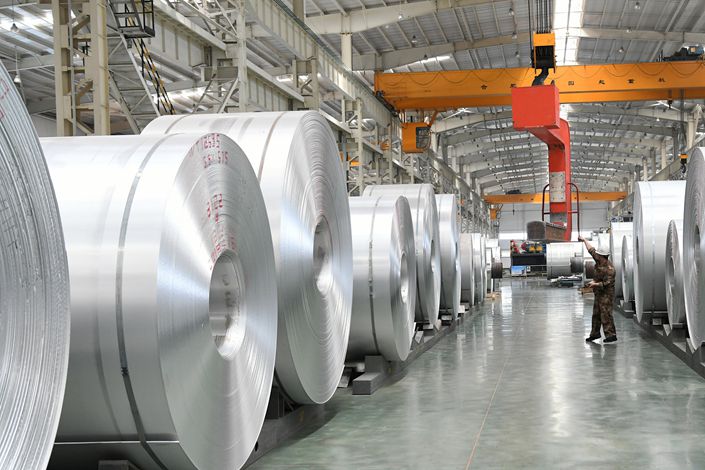 China’s power-hungry electrolytic aluminum industry is moving closer to carbon neutrality through a combination of greater recycling and relocating capacity to areas with higher use of renewable energy, a top industry official said.

China’s smelters produced about 37.1 million tons of electrolytic aluminum last year, consuming power that resulted in the emission of 420 million tons of carbon dioxide, the main greenhouse gas behind global warming. Electrolytic aluminum production is considered a major culprit behind carbon emissions due to its huge power use, accounting for 85% of consumption by the aluminum industry, and 65% of consumption by the non-ferrous metals sector.

While limiting production and capacity are important steps to controlling emissions, the industry is also taking other steps to tackle the problem, said Ge Honglin, Communist Party secretary of the China Non-Ferrous Metals Industry Association and a member of the Chinese People’s Political Consultative Conference, the nation’s highest political consultative body, which was meeting this week in Beijing.

Other key steps include improving the industry’s structure of power suppliers to focus more on clean, non-emissions sources like wind, solar and hydropower. Ge said the aluminum industry could do that by moving some of its capacity and production to parts of the country where renewable power is more widely used, such as mountainous Southwest China where hydropower is abundant.

The industry currently relies heavily on thermal power, which accounted for 80% of its consumption last year and is most often supplied by burning coal. Hydropower contributed about 15% of the industry’s needs, while nuclear and renewable power sources accounted for the remaining 5%.

Ge pointed out that electrolytic aluminum producers have been moving their production to Southwest China, most notably to Yunnan, with an aim to eventually make the mountainous province the nation’s largest production base.

The International Aluminum Institute estimated that about a third of the world’s aluminum production in 2019 came from recycling. But as a relatively late arrival to the practice, such recycling accounted for just 17% of total aluminum produced in China last year.

Ge pointed out that China is trying to improve its recycling record. Major cities like Shanghai have rolled out plans encouraging and sometimes even requiring all residents to engage in such recycling. Aluminum production using recycled material uses less than 5% of the power needed for the smelting of new product, saving 11.1 tons of emissions for every ton made with recycled material.

China is also trying to control the sector’s emissions by strictly limiting its production and capacity. That approach has seen China set a ceiling of about 45 million tons for its domestic electrolytic aluminum production capacity.

As representative of one of the nation’s biggest power consumers and thus a major greenhouse gas emitter, the China Non-Ferrous Metals Industry Association is working closely with the central government to lower the country’s carbon emissions. Last September, President Xi Jinping said China would aim for net zero carbon emissions before 2060, in a bold pledge by the world’s largest greenhouse gas emitter to tackle global heating and climate change.