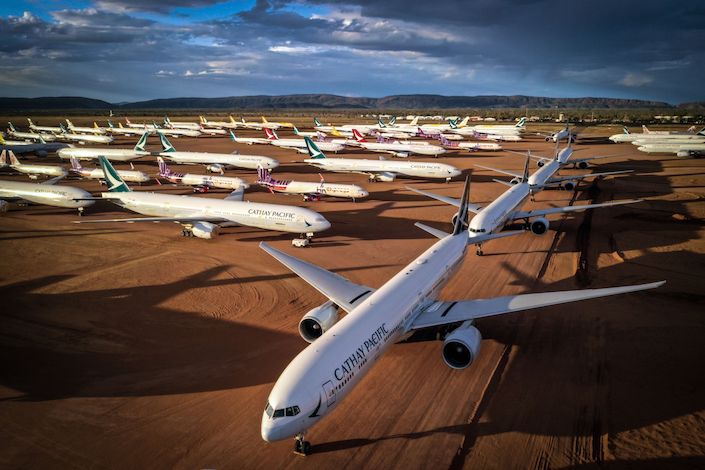 (Bloomberg) — Cathay Pacific Airways Ltd. reported a net loss of HK$21.65 billion ($2.8 billion) for 2020, a period the carrier described as “the most challenging 12 months of its more than 70-year history” as the coronavirus pandemic brought unprecedented disruption to global air travel.

The outlook isn’t much better, according to Chairman Patrick Healy.

“It is by no means clear how the pandemic and its impact will develop,” he said Wednesday in an online briefing. “The pace of recovery remains highly uncertain.” Healy said the company does expect some improvement in the second half of 2021.

Hong Kong has largely closed its borders to nonresidents and imposed 21-day mandatory hotel quarantines on those who return. Cathay said it expects to operate at well below 50% of passenger capacity in 2021.

Cathay’s shares slid as much as 2.3% when trading resumed Wednesday afternoon following the results, before paring the loss to 0.6% at the close. They’ve stabilized this year after slumping almost 30% in 2020.

The company said it will persist with cash preservation measures, which include maintaining executive pay cuts through this year. And it has asked employees to sign up for a third “special leave program” in the first half of 2021, to which 80% have agreed. Previous programs have involved staff taking three weeks of unpaid leave over a designated period.

Cathay raised HK$39 billion in a recapitalization in July, and its available unrestricted liquidity stood at HK$28.6 billion at the end of 2020. It also issued HK$6.74 billion in convertible bonds this year. At a briefing Wednesday, Chief Executive Officer Augustus Tang said the company’s cash and liquidity condition is healthy.

Last year started fairly promisingly for Cathay with a slight pickup in traffic after a tough second half of 2019, when anti-government protests rocked Hong Kong and hit the Asian financial center’s visitor numbers. But the carrier’s position worsened dramatically with the onset of Covid-19 in Wuhan in late January.

At that point, Cathay issued a press release with the first sentence unusually all in bold:

“Due to the evolving information from health authorities, we will allow crew members and front-line airport employees to wear surgical face masks when on duty at their discretion,” it said.

Strange as it might seem now that masks are ubiquitous, the policy was well ahead of its time — and an omen of the chaos about to hit global air travel. A day later, regional unit Cathay Dragon suspended flights to and from Wuhan for a month. On Jan. 26, the suspension was pushed to the end of March, and then matters snowballed as the pandemic took hold, ripping travel plans and the aviation industry apart.

The extent of the damage from 2020 on Hong Kong’s flag carrier was revealed shortly after midday Wednesday. The airline had already warned that the numbers wouldn’t be pretty following a first-half loss of HK$9.87 billion. For the July-December period the loss was even bigger, HK$11.8 billion.

The loss was net of HK$2.7 billion of Covid-related government grants. It included impairment and related charges of HK$4.1 billion on 34 aircraft unlikely to reenter meaningful service again before being retired or returned to lessors, as well as subsidiaries’ assets and HK$4 billion of restructuring costs, including a HK$1.6 billion write-off of a deferred tax asset at Cathay Dragon.

Even after the recapitalization in July and cost reductions through layoffs, pay cuts and a skeleton flight schedule, Cathay is still burning through HK$1.5 billion or more a month, with passenger traffic down 99% from pre-pandemic levels.

A recent law requiring flight crew to quarantine has added to Cathay’s woes — and a further HK$300 million to HK$400 million to its monthly cash drain. There’s no indication how long the crew quarantine rule will stay in place, Healy said. The rule has become a major short-term headwind because it has forced Cathay to scale back operations, including cargo services, which have been a source of strength and continue to look positive.

Cathay said it reached an agreement with Airbus SE to defer delivery of A350-900s and A350-1000s as far out as 2023 and its A321neos as far out as 2025. The airline is also in advanced negotiations with Boeing Co. on the deferral of 777-9 deliveries. Chief Operations and Service Delivery Officer Greg Hughes said those Boeing aircraft aren’t expected to arrive before 2025.

Cathay took delivery of 10 new aircraft in 2020, including its first A321neo, and partially converted four Boeing 777-300ER passenger aircraft to provide additional cargo-carrying capacity. The company is transferring certain aircraft from Cathay Dragon to Cathay and low-cost unit HK Express, which it has no plans to list, Tang said.

Andrew Lee, an analyst at Jefferies, said he expects Cathay to continue losing money until travel and quarantine restrictions ease and international travel returns, noting that 82 of the carrier’s planes are parked in locations outside Hong Kong.

“However, we maintain a buy with our HK$8.00 price target as we estimate Cathy is close to the bottom given January passenger traffic was already down 99% year-on-year,” Lee wrote in a note.

The downbeat 2020 results followed the pattern of monthly reports last year as the pandemic showed no signs of easing.

“Our passenger business continues to face significant challenges,” Chief Customer and Commercial Officer Ronald Lam said in a previous statement on Cathay’s December traffic figures. One optimistic note came in an October release amid plans to open a travel corridor with Singapore, which Lam described as “a hugely encouraging development.” That was soon snuffed out, though, as the plan was shelved due to a virus flare-up in Hong Kong.

Lam said Wednesday the Hong Kong and Singapore governments are still communicating about the travel bubble.