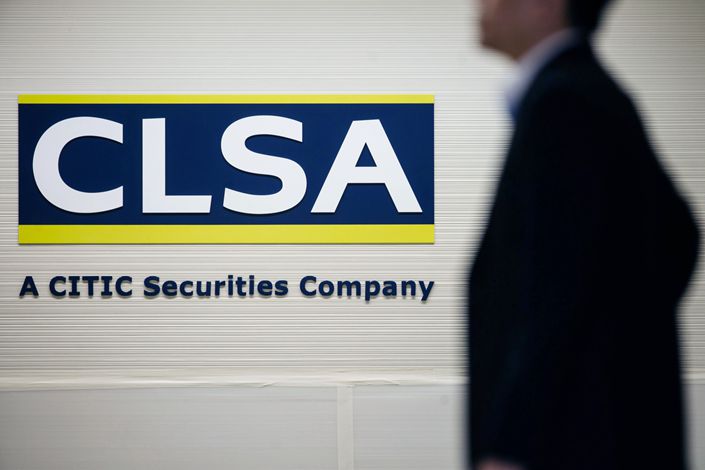 The CLSA Ltd. logo is displayed at the company's office in Hong Kong on July 5, 2017. Photo: Bloomberg

(Bloomberg) — A former CLSA Ltd. managing director has accused the firm of “blatant” misbehavior in its role as bond underwriter for CEFC China Energy Co., a once high-flying oil conglomerate that plunged into bankruptcy last year.

Kathy Liu, who spent more than six years in senior investment banking roles at CLSA before leaving during a round of job cuts in 2019, alleges that the firm and its parent company misled investors, failed to disclose conflicts of interest and struck a side deal with CEFC Energy that disadvantaged bondholders.

Bloomberg has been unable to independently verify most of Liu’s claims, which she detailed in a previously unreported Jan. 13 letter to Hong Kong’s Securities and Futures Commission. Liu said in the letter that she bought CEFC Energy bonds in the secondary market for her personal account while still employed by CLSA, with the blessing of a senior manager. She said she waited until now to speak out because she feared retribution and it took her three years to piece together the full extent of what had happened.

Her allegations echo, and in some cases add to, claims of wrongdoing made by other CEFC Energy bondholders in an October letter to the SFC that was first reported by Debtwire. Those investors have called for CLSA to reimburse them for losses on the bonds, which rarely trade but were recently indicated at about 15 cents on the dollar, according to Bloomberg-compiled data.

While it’s unclear if the SFC has started a formal investigation, the regulator recently sent CLSA a list of questions on the CEFC Energy bonds, according to a person familiar with the matter who asked not to be named discussing private information.

“CLSA has been complying with the applicable laws and regulations, upholding the best international standards and putting clients’ interest as the priority of the firm,” a CLSA spokeswoman said in an emailed response to questions from Bloomberg. “Other than this, we do not consider it appropriate to comment. The fact that we are responding only by saying ‘no comment’ should not be taken as our form of acceptance of the accuracy of the contents of your proposed article.”

Liu’s allegations represent the latest controversy to emerge from CLSA since the Hong Kong-based firm was acquired in 2013 by Citic Securities Co., whose largest shareholder is China’s state-run Citic Group. Internal disagreements about CLSA’s direction under Chinese government ownership have roiled the firm in recent years, leading to the departure of dozens of senior executives.

Coming in the midst of a nearly yearlong clampdown on Hong Kong by China’s central government, the allegations may provide a test of regulators’ willingness to investigate a business owned by a powerful state-run Chinese conglomerate. Investors are watching cases like this closely as they try to gauge how the financial hub’s regulatory systems will evolve amid increased intervention from Beijing.

It’s difficult to gauge whether CLSA is at fault, said Andrew Collier, managing director of Orient Capital Research and author of a book on Chinese credit markets who’s been following developments at CEFC Energy. He noted that investors bought the bonds despite an apparent lack of transparency around the deal at the time of issuance.

Also unclear is how the SFC will view Liu’s allegations in light of her purchasing the debt while still employed by CLSA. In general, investment banks tend to ban or discourage employees from buying securities underwritten by their own firms to avoid perceived conflicts of interest, whether the employees are directly involved in the deal or not, said Sam Ngai, chief risk officer at Soochow Securities (International) Financial Holdings Ltd. in Hong Kong.

The SFC declined to comment. The regulator conducted 438 investigations during the year ended March 2020, a period in which it handled 4,491 complaints.

Citic Securities didn’t respond to requests for comment, and attempts to reach CEFC Energy were unsuccessful.

Liu, who was head of international debt capital markets at CLSA until early 2016 but had moved to a new role overseeing the firm’s One Belt One Road initiatives before the $250 million CEFC Energy bond sale was launched, confirmed the contents of her letter to the SFC.

Liu also said by phone that she followed CLSA’s rules on employee trading when she bought the CEFC Energy bonds. “I strongly urge the SFC to investigate and hold the investment bank and senior bankers accountable,” she said.

While Liu’s letter repeated several of the accusations in the October complaint from other bondholders, her allegations on a purported side deal involving CEFC Energy and parts of the Citic empire are new.

According to Liu, CLSA and CSI AMC Co., a unit of Citic securities, held a large portion of CEFC Energy’s bonds on their own balance sheets before prices tumbled in early 2018 on reports that the oil conglomerate’s chairman had been investigated by Chinese authorities. CEFC Energy, which said at the time that reports about the chairman were “unfounded” and “irresponsible,” defaulted in May 2018.

Liu alleged that while CLSA ultimately booked a loss on the bonds, CSI AMC struck a deal with CEFC Energy in which it agreed to swap its bond holdings for CEFC Energy’s 15% stake in Citic International Assets Management Ltd., an investment the oil company had held since 2016.

Liu alleged the CSI AMC deal deprived other CEFC Energy creditors of valuable assets and was a violation of the SFC’s conflict of interest rules.

Regulatory filings compiled by Bloomberg confirm that CEFC Energy’s stake in Citic International Assets Management was transferred to CSI AMC in May 2018. The filings don’t show whether CSI AMC paid for the stake with defaulted CEFC Energy bonds. Citic Securities didn’t respond to requests for comment on the transfer. Attempts to reach CEFC Energy were unsuccessful.