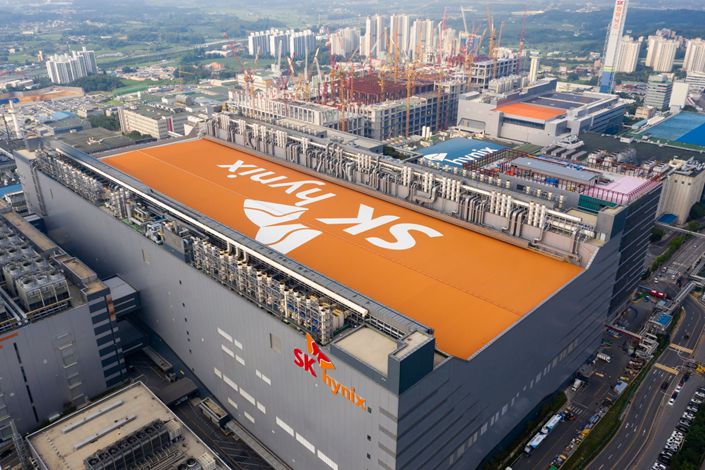 The SK Hynix Inc. logo is displayed atop the company's semiconductor plant in this aerial photograph taken above Icheon, South Korea. Photo: Bloomberg

The Committee on Foreign Investment in the United States, better known as CFIUS, signed off on the deal, the company said in a statement Friday, following approval from the Federal Trade Commission. Icheon, South Korea-based Hynix, which announced the deal in October, is trying to win approval from the remaining countries this year.

The U.S. clearance comes as the Biden administration is reviewing semiconductor supply chains in the wake of a global chip shortage. If Hynix succeeds in getting signoffs from governments including China and the U.K., it will cement its position as the largest Nand producer after Samsung Electronics Co. Meanwhile, Intel gains funds to invest in its faster-growing logic businesses.

Hynix will pay $7 billion in the deal’s first phase and the rest by March 2025. It is set to take over Intel’s facility in Dalian, China, by the end of 2021, boosting its market share of flash memory components used in computers and other devices to more than 20%. As of the fourth quarter of 2020, Hynix’s Nand market share was 11.6%, while Intel’s was 8.6%. Samsung dominates with 32.9% of the market, according to research firm TrendForce.

“If the Nand market recovers following the successful acquisition of Intel’s Nand capacity, we expect Hynix Nand sales to be 40% higher than our current forecast,” said CW Chung, head of Asia technology at Nomura Financial Investment. Nand prices will stabilize from the second quarter and increase from the second half of this year, Chung said.

Hynix plans to more than triple its flash-memory revenue over five years through the acquisition, Chief Executive Officer Lee Seok-hee said in November. The deal’s purpose was “to accelerate the pace of securing SSD technology and product portfolio” and “to overcome the limitation of scale which would have been a constraint as a late comer,” Lee said.

The Korean company will pay about half of the $9 billion with its cash reserves and operating cash flow and the rest will be financed through outside funding such as borrowing. The company was considering selling unspecified assets, Lee said.