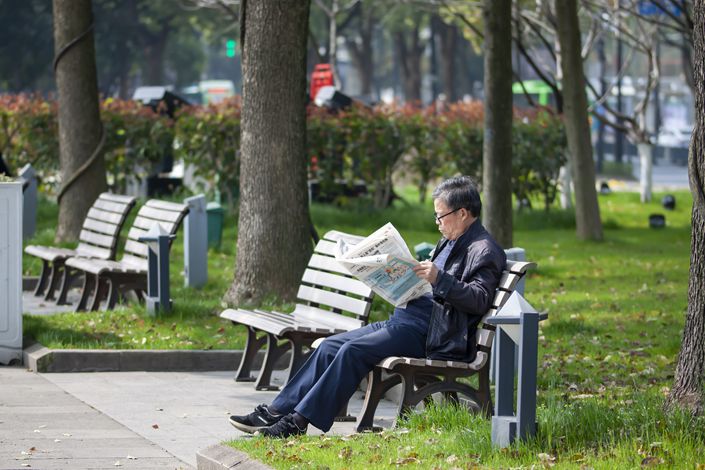 China’s pension and social security pressures are mounting. Despite the fact that fiscal subsidies exceeded 2 trillion yuan ($307.7 billion) in 2020, the national social security fund’s revenue-expenditure gap reached a stupefying 621.917 billion yuan, marking the first deficit since records began. Also, for the first time, 50 billion yuan was paid out from the strategic reserve fund. Although this measure was mainly a result of Covid-19 response policies, such as the reduction or exemption of companies’ social insurance premiums, it still sounded a warning alarm for China’s pension system. In recent press conferences, Premier Li Keqiang has repeatedly brought up the pension issue, indicating its significance in the minds of policymakers. A sustainable pension system is a necessary component of systematic reform and overall planning. As for specific measures, delaying the retirement age would be an important step.

During this year’s “Two Sessions,” the proposal to raise the national retirement age aroused heated discussion — and understandably so, as the age for retirement affects the vital interests of many millions of workers nationwide. The fifth plenary session of the 19th Communist Party of China Central Committee decided to “raise the retirement age in steps.” This has become an important part of the 14th Five-Year Plan and also appeared in the 2021 Government Work Report. A spokesperson for the Ministry of Human Resources and Social Security recently disclosed that the ministry is working with relevant departments to develop a detailed plan for the reform.

The delayed retirement reform is inevitable; the key now is guiding implementation to attain the desired results. Proper implementation will depend on the rationality and feasibility of the plan itself, its relevance to China’s national conditions, the transparency of the formulation process and whether diverse opinions are considered to reach a true consensus. It is difficult enough to design a perfect social security system, but remedying any deficiencies will be even harder after implementation. Policymakers must therefore open all the doors and consider a variety of opinions while formulating the plan, which is best practice for scientific, democratic and law-based policymaking. But for the moment, rumors and suspicions abound. This is certainly not normal.

Raising the retirement age can significantly mitigate pension pressure in both revenue and spending, so it is a common practice around the world. But China is facing a particularly urgent situation. At present, the mandatory retirement ages in China are 60 for all male workers, 55 for female officials and 50 for other female workers. These are noticeably lower than 65, the average retirement age in other major economies. For instance, the United States is currently making plans to raise the retirement age from 66 to 67.

China’s current regulations were developed according to the average life expectancy, overall labor conditions and modes of employment in the 1950s. At that time, average life expectancy of a Chinese citizen was approximately 40 years. But in 2019, this figure had been raised to surpass 77. During the 14th Five-Year Plan, China’s old-age population is estimated to exceed 300 million, classifying the country as a moderately aging society rather than a mildly aging society.

When determining a reasonable age for retirement, China will naturally take factors of economic and social development into consideration. The retirement standards currently in place are the product of an industrial society, which strikes a balance between physical conditions and the industrial load. But things are different now. China has transitioned to an information society, with the service sector gradually creating the most jobs. Thus, China’s current retirement regulations are divorced from the reality of China’s social development. If the system is not adjusted in a timely manner, there will be a huge waste of human resources. Raising the retirement age is a momentous decision, and the longer it is put off, the less control there will be.

Retirement reform will entail a systematic project demanding a high level of inclusiveness. The plan itself and the procedures for its formulation should be based in openness. For many countries, when it comes to major decisions affecting all people’s rights and interests (such as raising the retirement age), the participation of all levels of government and sectors of society is a common and encouraged practice. Final votes will only be taken after long-term, even heated, public debates. Departments involved should listen to the views of all parties carefully and discuss all aspects thoroughly.

A consensus has already been reached on the pace of implementation — maintaining steady and flexible progress. In this case, the “one-size-fits-all” approach is infeasible. Instead, a designated system structure should give different age and occupation groups the opportunity to make their own choice. After hearing the suggestions of all parties and drawing experience from international practice, China should develop a clear roadmap and write it into law for a strong guarantee and rigorous implementation.

For the reform to achieve stable implementation, it should have majority support among the population. As in most countries, many Chinese citizens do not welcome delayed retirement. However, such an action is unavoidable; if China leaves the current retirement age in place, it will be unable to cope with the increasingly aging population. Of course, a reform plan that neglects full discussion can still be enforced compulsorily. But the effect may not be as desirable. We hope that through public discussion, the government can clarify the reform’s rationale and inevitability, as well as the potential benefits it brings to income and welfare. The Chinese are a reasonable people. The reform should also be supported with incentives — for example, a design for preferential treatment in terms of taxation and pension collection — to increase the appeal of delayed retirement.

Still, there is only so much that can be done so quickly. We should not expect delayed retirement to be accomplished in one stroke that immediately resolves the pension problem. There are many more onerous tasks ahead. First of all, pension pressure is ultimately an actuarial problem. The degree of the gap will directly determine policy design. China’s current actuarial level for pensions is in urgent need of improvement.

In terms of mechanism, overall planning for endowment insurance needs to be prioritized. Some members of the Chinese People’s Political Consultative Conference believe that the 14th Five-Year Plan period is both the optimal window and the last chance for implementing the overall endowment insurance planning. The 2021 Government Work Report also explicitly stated the authorities will “work toward unified national management of basic old-age insurance funds” as overall planning has reached the critical stage. The work report also noted that “(a)s the third pillar, private pensions will develop in a well-regulated way,” indicating that the tertiary private pension system is expected to see a faster rollout.

Calls to improve the operation of pensions in the interest of financial sustainability have been growing in recent years. The pension system needs a healthy capital market, and the capital market also depends on the participation of pensions. It is possible that the capital market will act to preserve and increase the value of pensions. Still, the contributions of economic and social systems are also indispensable. Older adults should be provided with more suitable job opportunities and work environments should be made fair and friendly for them.

In China, delayed retirement is not simply an issue of financial sustainability within the pension system; it is a complex issue left to us by history. It involves the plethora of complications that come with transition between systems, which must additionally be balanced for inter-generational equity. Rights and interests are weighed differently by different departments, groups and generations. Thus any deviation from “considerate” planning could throw off the consensus on reform. Whether or not delayed retirement reform can advance smoothly will depend on the transparency of the formulation process, which will reflect the “greatest common denominator” of public opinion.