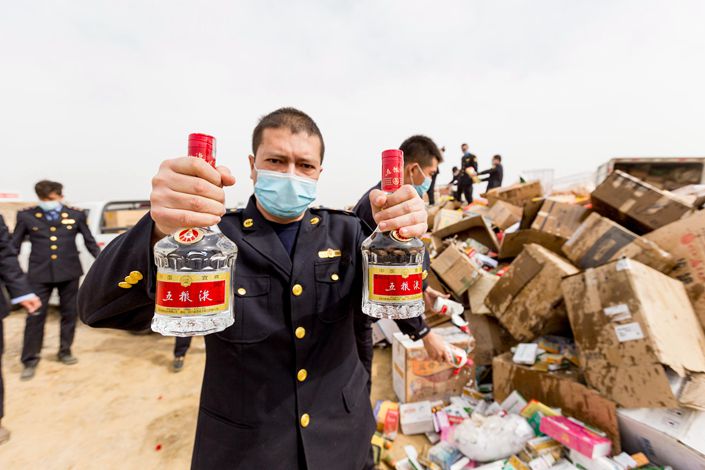 A staff member of China’s national market regulator on Sunday holds up bottles of counterfeit booze about to be destroyed in Kuqa, Northwest China’s Xinjiang Uyghur autonomous region. Photo: The Paper

The annual consumer rights show of China’s national broadcaster this year took aim at bathroom-fittings maker Kohler over facial recognition tech in its stores, while an Alibaba-backed web browser was faulted for promoting dubious health-care products.

Known as the “315 Show,” the show has aired on CCTV every March 15 since 1991 to mark World Consumer Rights Day and targets companies over a range of issues. For instance, last year’s edition — delayed until July due to the Covid-19 epidemic — accused news aggregation app Qutoutiao of allowing dubious ads on its platform.

This year, U.S.-based Kohler was accused of installing face-scanning cameras in all its China stores without shoppers’ consent. The show claimed that the system records the faces it scans and gathers data on people’s shopping habits.

“The camera can even tell the shopper’s mood,” one of the CCTV reporters featured in the show said.

In a statement Tuesday, Kohler apologized and said it would remove the cameras, while denying the substance of the show’s claims. “We only used the data from the system to count the number of customers and did not save, analyze or transfer the collected data,” the statement (link in Chinese) posted to the brand’s Weibo account read.

The show interviewed drivers who claimed that vehicles made by the two companies suffered from problems including dysfunctional gearboxes, unpredictable braking, unusual noises and acceleration failures.

Soon after the broadcast, Infiniti issued an apology Monday on Weibo, saying it would provide “exclusive customer service” to drivers. On Tuesday, it said it would extend the warranty on one of the models in question — the QX60 SUV — to eight years or 200,000 kilometers, up from four years or 100,000 kilometers.

UC Browser said in a Monday statement that it had removed such ads and vowed to better verify advertisers. Qihoo 360 made similar promises in its own statement Monday.

In early trading Tuesday, Tongdao Leipin’s Hong Kong shares and Qihoo 360’s Shanghai stock slipped as much as 6% and 2.2%, respectively.