By Sun Liangzi and Lin Ting 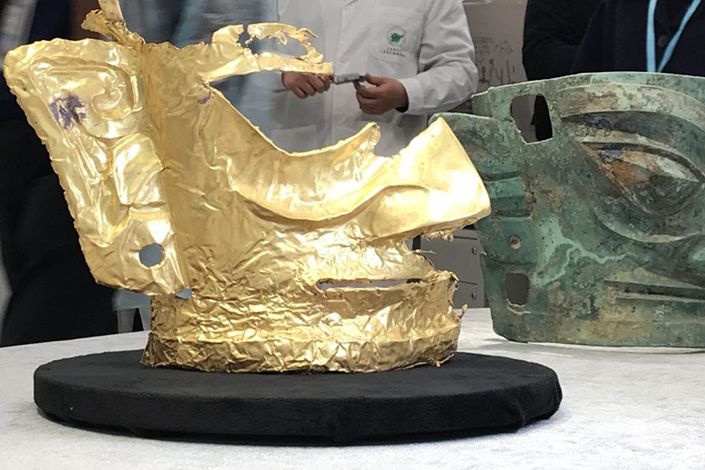 The latest artifacts unearthed at one of China’s most important bronze age archaeological sites may shine new light on the nature, significance and chronology of the civilization that created them, officials said.

The most recent haul from the Sanxingdui site in Southwest China’s Sichuan province includes over 500 items, such masks, bird-shaped gold ornaments and pieces of gold foil, Song Xinchao, deputy director of the State Administration of Cultural Heritage, said at a meeting held to discuss the findings this weekend.

Also unearthed were over 120 pieces of ivory determined by archeologists to be relics from the late stages of the Sanxingdui site, according to reporting from the Dazhong Daily, a Shandong province-based newspaper. “It is rare to find ivory in such concentration in China,” Wu Shunqing, director of the Jingzhou Cultural Relics Protection Research Center, told reporters at the excavation scene.

The pits are believed to date to sometime between 4000 B.C. and 3200 B.C. Sanxingdui is thought to be connected to the ancient culture and state of Shu, which once ruled in the area until it was conquered by another state, the Qin, in 316 B.C.

One of the most remarkable objects unearthed was the largest ever gold mask found from the period. The mask is a 280-gram fragment of what would have been a 500-gram mask originally, according to reports from national broadcaster CGTN that cited Lei Yu, head of Sanxingdui excavation work.

A round hole in the right ear of the mask, a typical feature of masks found at the site, indicate that people of the Shu culture may have pierced their ears, Lei said.

The new discoveries were found in six “sacrificial pits” discovered at the site between November 2019 and May 2020, according to Chen Xiandan, former vice president of the Sichuan Institute of Cultural Relics and Archaeology. Two such pits had been discovered prior to the latest six, in 1986.

Experts believe that members of the Shu culture would bury sacred items from their temples when a ruler died, unintentionally forming treasure troves for modern archaeologists.

The first discoveries were made at the site in 1929, when a local farmer found manmade jade objects. A brief excavation at the site was suspended a few years later due to the outbreak of war with Japan. Exploration of Sanxingdui resumed in 1956, and archaeological work has been systematically carried out since 2011.