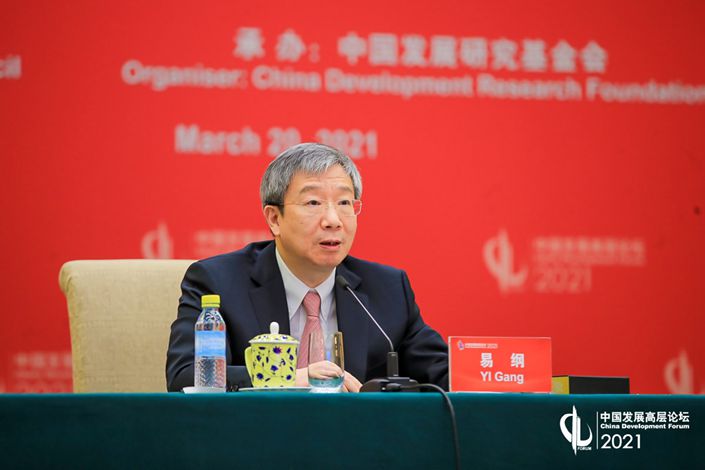 China’s central bank governor has warned that climate change poses new challenges to financial stability and monetary policy, and that the potential risks to credit, markets and liquidity must be properly assessed and tackled.

The massive amount of green investment needed to achieve China’s goal of reaching peak emissions in 2030 and carbon neutrality in 2060 will require mobilization of the private sector and market forces as the country’s public finances will only be able to cover a fraction of the hundreds of trillions of yuan likely to be required, People’s Bank of China (PBOC) Governor Yi Gang said in a speech at the China Development Forum in Beijing on Saturday.

“Studies show that climate change may make extreme weather more frequent and lead to greater loss,” Yi said, according to a transcript of his speech posted on the central bank’s website. “Meanwhile, green transition may cause the value of carbon-intensive assets to fall and sour the balance sheet of firms and financial institutions. This will heighten credit risk, market risk and liquidity risk, and further undermine the stability of the entire financial system.”

China’s top leadership has set ambitious goals to address climate change. In September, President Xi Jinping pledged that the world’s biggest emitter of carbon dioxide — the chief greenhouse gas contributing to global warming — aims to top out such emissions before 2030 and achieve carbon neutrality by 2060.

The PBOC has vowed to play its part in meeting the targets. In December, Yi outlined measures to improve standards for green finance and consider imposing requirements on financial institutions to disclose environment-related information. In January, at its annual work meeting, the central bank said it would improve the policy framework and incentive mechanisms for green finance to guide financial resources to support green development. The financial system’s ability to manage climate change-related risks will also be improved.

“In a nutshell, the financial system can play a key role in supporting green transition and managing climate-related risks,” Yi said in his Saturday speech. Green finance will be a priority for the PBOC over the next five years and climate change will be one of the factors taken into consideration in the formulation of policies for financial stability, monetary policy and the investment of foreign-exchange reserves, he said.

In terms of including green finance in the policy framework, the PBOC is studying how to incorporate climate change factors into its stress tests of financial institutions and is exploring the role of monetary policy in encouraging financial institutions to support carbon emission reduction through incentives such as lower interest rates or allowing special-purpose refinancing tools, Yi said.

Investment of the country’s foreign-exchange reserves in green bonds will be increased, investment in carbon-intensive assets will be reined in, and climate risk factors will be incorporated into the risk management framework, he said.

An important foundation for climate stress tests is the disclosure of consistent and accurate information. The PBOC plans to develop a mandatory disclosure system that would require all financial institutions and firms to follow uniform disclosure standards. The central bank has already taken measures to improve disclosure, he said, noting that the use of funds raised from green financial bonds in the interbank market is now required to be disclosed on a quarterly basis and financial institutions are also required to report the use and allocation of green loans.

The central bank is also increasing coordination with other economies and multilateral institutions, Yi said. China is working with European government agencies to agree on common standards for green projects which will be announced later this year, and the issue will also be discussed at the G-20 Summit in Rome in October, he said.