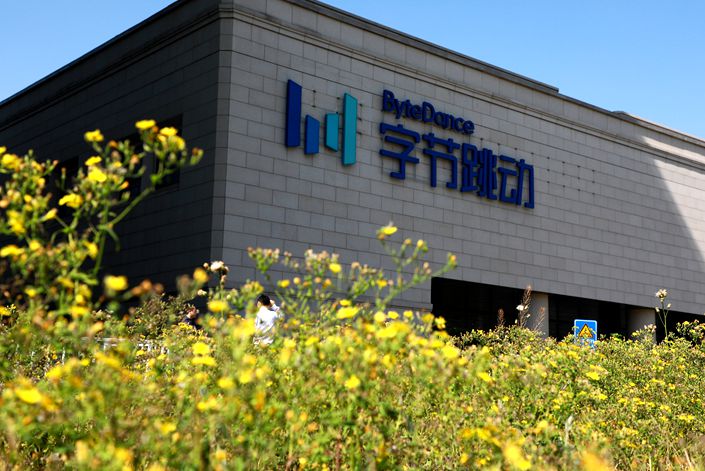 ByteDance’s headquarters in Beijing on May 10. Photo: VCG

ByteDance Ltd., the owner of short-video app TikTok, is leveling up its challenge to Tencent in the video game sector by acquiring the Shanghai-based maker of one of Southeast Asia’s most popular mobile games.

ByteDance has inked a deal to acquire Shanghai Moonton Technology Co. Ltd., Moonton CEO Yuan Jing said in a companywide letter on Monday. After the acquisition, Moonton will continue to operate independently and deepen its partnership with ByteDance to explore global markets.

The letter didn’t mention a price for the deal, but sources in the Shanghai gaming industry told Caixin that it may have been worth slightly over $4 billion.

Moonton, co-founded in 2014 by former Tencent employees Yuan and Xu Zhenhua, has found particular success in Southeast Asia with its online battle arena game “Mobile Legends: Bang Bang.” The game has the 10th largest overseas revenue of any Chinese mobile game, according to a 2020 report (link in Chinese) published by data research firm Sensor Tower. The top spot was held by Tencent’s PUBG Mobile.

Moonton has also made a foray into esports. Mobile Legends was included as a medal event at the 2019 Southeast Asian Games held in the Philippines.

In recent years, ByteDance has upped its involvement in gaming as it looks to compete with rivals such as Tencent Holdings Ltd. In this latest deal, Tencent had also emerged as potential buyer and had even put down a $100 million deposit, the Shanghai gaming sources told Caixin. However, ByteDance offered a better price and promised Moonton greater autonomy after the acquisition, the sources said.

A source within ByteDance said that the company has invested in some 20 game developers, although Tencent often races to offer companies ByteDance is interested in higher prices to stymie any deals.

The heated competition reflects the companies’ efforts to beef up their advertising revenue from games. ByteDance’s revenue from in-game ads has surpassed Tencent’s since 2018. In 2020, ByteDance became China’s biggest advertising platform with revenue of 150 billion yuan ($23 billion), compared with the less than 100 billion yuan generated by Tencent.

Yuan said in the internal memo that Moonton’s two co-founders hold different views of the future, and that he hopes to continue to lead Moonton while Xu thinks the gaming business “is not his ultimate goal and welcomes other challenges.” After the acquisition, Yuan will continue to serve as CEO and the company will offer employees additional bonuses during the transition. Moonton now has about 750 employees with more than 50 based overseas.

Xu, who founded Moonton when he was still working for Tencent, was ordered by a Shanghai court to pay Tencent 19.4 million yuan in 2018 for violating a noncompete clause he signed with the company.

Ding Yi and Han Wei contributed to this report.