In Depth: How Suning Fell Into Crisis as JD.com Surged 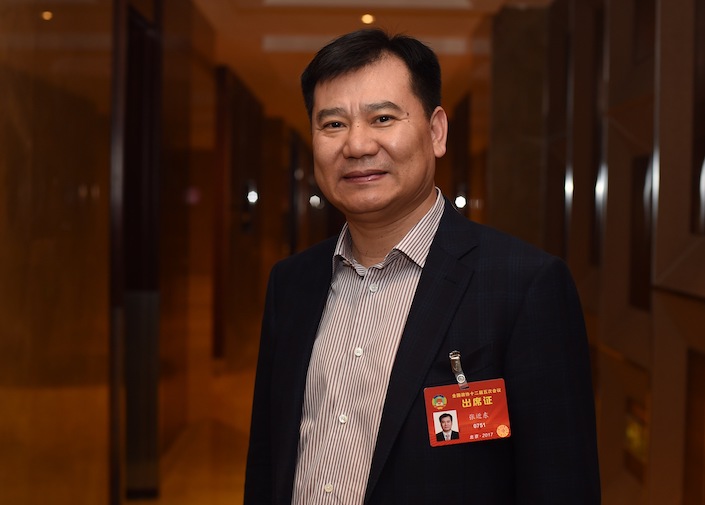 Both are from eastern coastal Chinese province of Jiangsu. Zhang lost his parents by his early teenage years and was brought up by his elder brother. Liu was born in a poor boatman’s family and raised by his grandparents.

After graduating from Nanjing Normal University in 1984 with a degree in Chinese literature, Zhang worked as a clerk at a state-owned company, earning 55.8 yuan ($8.60) a month. He later opened a coffee shop in Nanjing, and as he searched for cheap air conditioners for his store, he struck up a friendship with a distributor.

With 100,000 yuan of proceeds from selling coffee, 27-year-old Zhang started an air conditioner dealership in 1990, when Liu was still in high school. In the next 14 years, riding on affluent Chinese residents’ increasing consumption of air conditioners, refrigerators and televisions, Zhang expanded his shops across the country and built Suning into China’s first publicly-listed appliance retailer with a valuation of 820 million yuan ($126 million) in 2004.

In the same year, Liu started his e-commerce business. Zhang didn’t take Liu and JD.com as a serious competitor until several years later when online shopping suddenly changed the retail landscape. When Suning finally launched its online store in 2010, JD.com was already an e-commerce rising star sought after by venture investors who valued the company at around $500 million even though it was then losing money.

Since then, Suning had several price wars with JD.com. In August 2012, JD.com pledged prices at least 10% cheaper than Suning. Zhang and Liu also went tit-for-tat on social media. Zhang said in interviews that if JD.com’s growth was faster than Suning, he would give Suning to Liu for free. Liu then accepted the challenge, saying if he wins, he would give 100 million Suning shares to people who shared his post on social media.

In 2015, the two rivals were still comparable in scale. JD.com’s goal then was to beat Suning and its rival Gome Electrical Appliances Holding Ltd. Now, JD.com is valued at 12 times more than Suning. In 2020, JD.com’s revenue was more than 740 billion yuan, almost three times Suning’s 260 billion yuan.

Former Chinese Premier Wen Jiabao once encouraged Zhang to build Suning into “Wal-Mart of China.” Zhang had an even bigger goal. “Walmart is too heavy, and Amazon.com is too light. Suning wants to be Walmart plus Amazon of China,” Zhang said in a speech at Stanford University in 2013.

But integrating online and offline has been far more difficult than Zhang had expected. In the third quarter of 2013, Suning reported its first quarterly loss since it went public. Zhang attributed the setback to applying Suning’s experience in traditional offline retail in online business.

Talent is another problem. Zhang has always distrusted outside executives, according to an executive from the retail industry. The core management at Suning are mostly Zhang’s team who have been with him expanding physical stores and have little experience in e-commerce, according to Liang Zhenpeng, a senior industrial economics expert. Zhang has realized the problem. At an employee meeting in January, Zhang announced that Suning has promoted several Millennial executives with an aim to bring more Internet talents to the management.

To compete with JD.com, Zhang chose to team up with Liu’s rival, Jack Ma. In 2015, Suning formed a strategic tie-up with Alibaba Group Holding Ltd. Under the deal, Alibaba acquired about 20% of Suning’s shares for 28.3 billion yuan, becoming the second-largest shareholder only after Zhang. Suning also bought 1.1% of Alibaba’s stock for 14 billion yuan.

After the alliance, Alibaba rapidly increased its market share in home appliance e-commerce sales with the help of Suning, and secured a foothold in JD.com’s market. Suning’s flagship store on Alibaba’s Tmall also became the leader in single-store sales on the e-commerce platform’s “Double 11” shopping event.

Meanwhile, the help from Alibaba was not enough to support Suning’s aggressive expansion both in offline retail and other fields, from real estate, telecom, to sports streaming and football clubs.

The shopping spree and loss from its core retail business have dragged Suning into a liquidity crisis. In 2020, the company reported a net loss of 3.9 billion yuan on revenue of 258.4 billion yuan, down 4% from 2019. In the first three quarters of 2020, Suning closed more than 900 company-owned stores, though it opened 3,200 franchise stores last year, making the total number of stores close to 9,800.

Meanwhile Suning’s total liabilities, including those of the listed company and its parent’s other subsidiaries may reach more than 200 billion yuan, an executive at a Jiangsu bank estimated.

With operations losing money, Suning’s usual practice is to sell assets at the end of the year to make its annual results look better. The buyers of some assets are Suning’s own non-listed affiliates controlled by Zhang and his son. In 2019, Suning sold convenience store brand Suning Xiaodian to Zhang’s son for 745 million yuan.

Facing high near-term debt repayment pressures, Suning announced in late February a $2.3 billion share sale that will hand over nearly a quarter of the company to state-controlled entities.

Read more
Cover Story: What Will Suning Have to Sell Next?

In the bailout, Zhang and three of the other largest shareholders sold a combined 23% of the company’s shares to Shenzhen International Holding Ltd. and Shenzhen Kunpeng Equity Investment Management Co. Ltd., which are both controlled by the Shenzhen government’s State-owned Assets Supervision and Administration Commission (SASAC).

After the sale, Zhang’s stake in the company decreased to 16.38% from 24.94%. But he formed an entities-acting-in-concert alliance with Suning.com parent company Suning Appliance Group Co. Ltd., giving Zhang control of 21.83% of the voting power.

The alliance effectively leaves Zhang with significant sway over the company he founded 30 years ago. But the stake sale will do little to help Suning pay its 16 billion yuan of debt that’s due within a year, not to mention the more than 200 billion yuan of total debt the company and its subsidiaries owe.

Zhang is still seeking other potential investors and may have to sell more assets. His success will depend on whether investors will believe the retail tycoon can revive the struggling company.