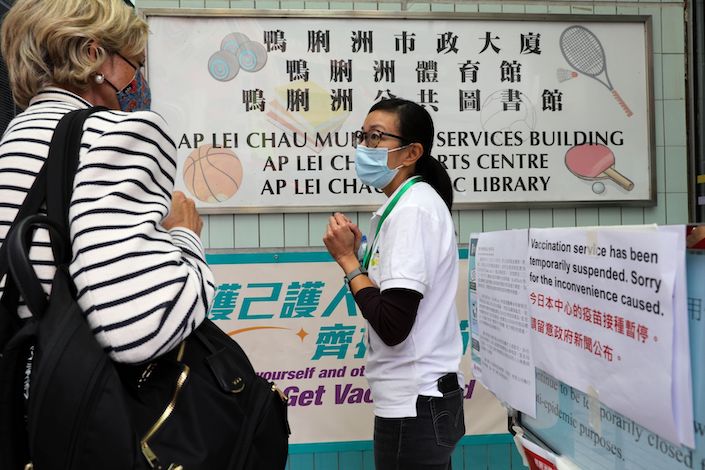 The more than 180,000 residents who missed their appointments for first and second doses during the suspension will be rescheduled, with those slated for second shots to receive them within the first few days of resumption, Secretary for the Civil Service Patrick Nip said Thursday in a briefing.

The abrupt suspension last week marked a big setback for a rollout already struggling to win over public confidence. Hong Kong’s slow vaccination pace, which trails that of rival financial hub Singapore, threatens to delay its reopening, hurting an economy that suffered the dual blow of the pandemic and pro-democracy protests in 2019.

Vaccine hesitation appears widespread in the population. Uptake of Chinese maker Sinovac Biotech Ltd.’s shot, the other option in Hong Kong, suffered during the BioNTech suspension as only 5,100 people received their first Sinovac dose Wednesday, down 41% from a week ago.

“We hope residents understand the importance of getting vaccines,” said Secretary for Food and Health Sophia Chan at the briefing. “We will gradually include vaccine completion into consideration regarding various containment policies.”

Shanghai Fosun Pharmaceutical Group Co. secured rights from BioNTech to develop and market the mRNA shot in the Chinese mainland, Hong Kong, Macau and Taiwan. The vaccine is marketed by Pfizer Inc. in other places.

The defects that caused the suspension affected a small number of bottles and included loose vial caps and stains on the bottles, according to Hong Kong officials. About 1.3 million doses have been delivered to the financial hub. Around 150,000 people received BioNTech shots in Hong Kong before the halt.

The probe found that the defects were caused during crimping of the vials in a German packaging site and that the ultra-cold storage conditions played a role, Chan said. No safety or quality concerns have been found, the companies said.