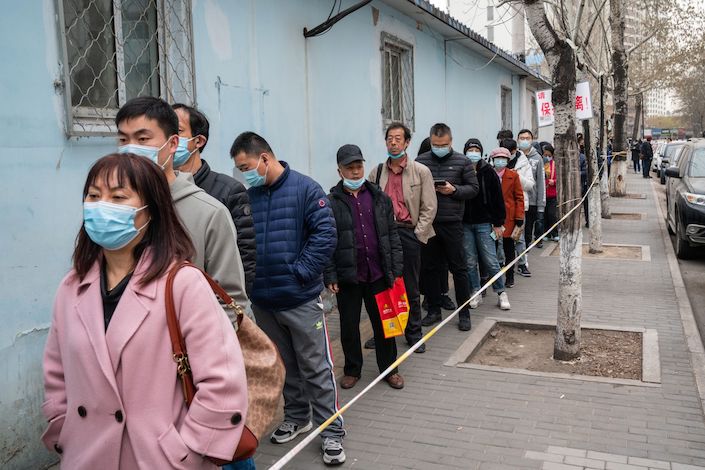 (Bloomberg) — Beijing is putting up color-coded signs on buildings in its financial district to indicate what percentage of workers inside have received Covid-19 vaccines, a move aimed at accelerating the Chinese capital’s immunization rollout amid intensifying government pressure.

The financial district is leading the campaign to “green code” its buildings, putting up green circular signs that indicate more than 80% of those working in a building have been vaccinated. Yellow notices are for those with 40% to 80% immunization rates, while red logos indicate fewer than 40% of people are protected.

While no penalties or specific consequences have been announced for low vaccination rates, many buildings have organized on-site immunization drives to make it easier for workers to get shots. The stepped-up efforts are adding extra pressure on local officials and employers amid fears that lagging vaccination rates may put reopening the economy at risk.

China has set a goal of vaccinating 40% of its population, or 560 million people, by the end of June. Tens of millions of workers at state-owned enterprises, party members, and college students are required to get immunized unless they provide a medical reason, while the government is offering incentives including small gifts and free rides to vaccination appointments to encourage shots.

The office signs build on a system China introduced last year requiring people to show a green code — indicating they are at low risk of having been exposed to Covid-19 — before being permitted to enter almost all public venues, including restaurants, shops and hotels. The assessment comes from built-in smartphone apps designed by China’s two biggest internet companies that pull personal data from phone carriers and government departments.

China has given about 4.5 million doses of vaccine each day for the past week. That’s close to the 5 million a day needed to reach an additional 417 million people, the number that will allow it to meet its vaccine goal before July.

While the pace is significantly faster than the average of 3 million doses per day in the U.S., it’s a much smaller proportion of the population. Only five doses per 100 people have been given so far in China, trailing 56 per 100 people in Israel and 26 per 100 in the U.S., Bloomberg’s vaccine tracker shows.