By Zheng Lichun and Matthew Walsh 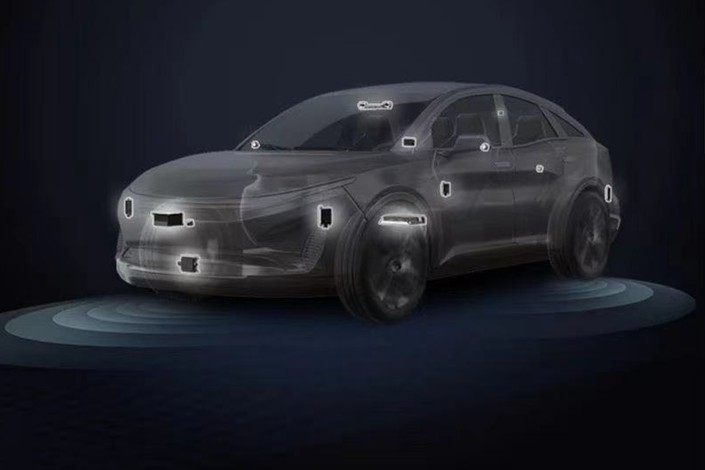 DJI’s automotive arm posted a digital flyer on social media stating that it will have a presence at Auto Shanghai 2021, which opens to the public on April 21.

SZ DJI Technology Co. Ltd. said Monday it will take part in the Shanghai auto show for the first time, confirming longstanding speculation that the Chinese drone giant is making a push into the car business.

The Shenzhen-headquartered firm’s automotive arm posted a digital flyer to its WeChat public account stating that it will have a presence at Auto Shanghai 2021, which opens to the public for a week starting April 21.

DJI declined to give further details before an announcement set for Monday. However, the flyer also showed a translucent image of a car with silhouettes of various widgets in the engine, body and cabin.

The company’s intelligent driving marque was established in 2016, but little information about the project has been publicly disclosed. Job postings on the company’s website provided the first clues, Reuters reported in January. Caixin understands that the venture mainly focuses on technology applications for businesses and is not directly consumer-facing.

Auto Shanghai 2021 represents a grand stage for DJI Automotive’s coming-out party. The biennial event is one of China’s two main automotive fairs and typically hosts hundreds of exhibitors and hundreds of thousands of visitors from across the world, although Covid-19 travel restrictions will likely hit attendance this year.

One source said the smart driving venture already employs about 700 staff. The person asked not to be named as the information is not public.

DJI Automotive has already begun collaborating with auto assembly plants and “has orders in hand,” the source added.

The venture is headed by Shen Shaojie, the chief of a joint research project between DJI and Hong Kong University of Science and Technology. In 2018, DJI obtained a second license to test networked vehicles in its home city.

The company indicated earlier this year that it was preparing to give its automotive project a greater public presence, saying it had been focusing on research and development, including cutting-edge technology applications in the automotive sector.

In January, Feng Sihan, the CEO of Volkswagen AG’s China subsidiary, said the carmaker was working with DJI to develop autonomous and semi-autonomous driving technologies for all road scenarios, and would install the software on mass-produced vehicles in the near future.

The collaboration stemmed from Volkswagen’s need to work with local technology companies in China to mitigate the country’s economic decoupling from Western nations, Feng said.

“Drones are essentially intelligent robots that help objects move precisely through space by sensing, controlling and making decisions,” a DJI insider told Caixin. “This principle can be used in many other robot-related scenarios.”

Founded in 2006, DJI has gone through several rounds of equity financing, details of which remain undisclosed.

In December, the U.S. government added DJI to the entity list, curtailing its access to U.S. suppliers.

A lengthy list of Chinese technology heavyweights have announced plans to enter the car market in recent months as the industry rallies behind an unprecedented shift toward electric vehicles (EVs) that are increasingly autonomous and connected.