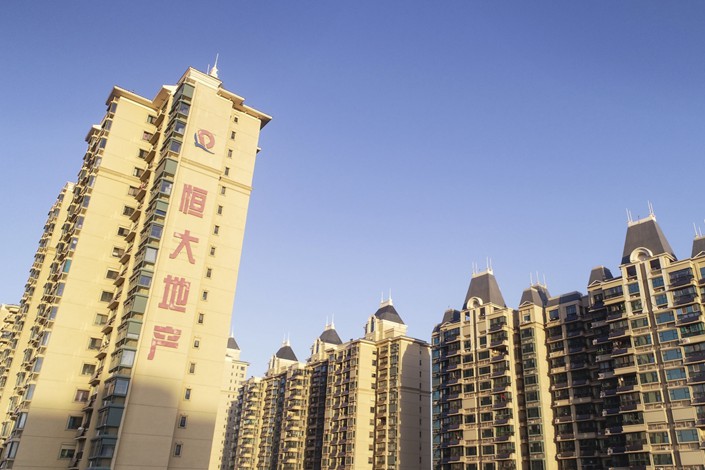 (Bloomberg) — Evergrande is falling further behind the vast majority of its largest peers in meeting stricter Chinese borrowing limits, raising refinancing risks for the country’s most indebted developer.

China Evergrande Group remained in breach of all key measures for debt levels at the end of last year, even as almost half of the country’s 66 major developers met them, up from 14 six months earlier, according to data compiled by Bloomberg. Of those largest real estate companies, only four violated all three metrics.

With China’s property sector accounting for about 29% of economic output, regulators are determined to rein in its risk, introducing so-called “three red lines” that cap borrowing. That’s prompted developers to cut leverage, spin off non-core assets and even bolster balance sheets by raising equity for affiliates.

The “deleveraging progress is happening faster than the market expected, driven by a combination of intention to meet regulatory requirements and a tighter financing environment,” said Nomura International Hong Kong Ltd. analyst Iris Chen. “The greater improvement developers make on the three-red-line metrics, the less hurdles they might face when negotiating with financial institutions.”

Despite the new rules only applying to a small number of companies, most Chinese developers have embraced them, according to China International Capital Corp. analysts.

Underscoring the urgency for regulators, China’s property developers are behind a record wave of corporate bond defaults this year, accounting for 27% of last quarter’s $15 billion missed payments, data compiled by Bloomberg show.

As companies work toward improving their metrics, analysts warn that some might be window dressing financial statements.

“A material increase of minority interests can boost developers’ equity base,” said Nomura’s Chen. “This can be an easier way to lower the net gearing ratio than actually decreasing the net debt.”

Evergrande’s goal of cutting about $100 billion in debt partly hinges on aggressive equity fundraising for its non-core businesses, Bloomberg Intelligence analysts said. Its long-term rating was affirmed by S&P at B+, with an outlook to stable from negative. The total amount of bonds and loans outstanding reached 199 billion yuan ($30 billion) as of Monday.

Evergrande and Guangzhou R&F Properties Co. were the only two major firms that didn’t show any material improvement, both in breach of all three metrics. The data tracks the 66 companies that reported full-year earnings last year among China’s largest 100 listed developers. Representatives for the companies didn’t respond to requests for comments.

Policy makers have set a deadline for mid-2023 to meet the requirements, giving companies a three-year transition period, Evergrande President Xia Haijun said on an earnings call last month. The company is trying to reach the targets by the end of next year, Xia said. The country’s largest developer China Vanke Co. expects to be compliant by the first quarter.

R&F’s Chairman Li Sze Lim said he’s confident that the firm will meet net-debt-to-equity metric by this year and reach full compliance by the end of next year, local media quoted him saying on an earnings call.

“Meeting the three red lines is a matter of survival for Chinese developers,” said Ma Dong, a partner at Beijing-based fund BG Capital Management. “Under ever stricter property curbs, only by meeting these metrics can a developer secure its refinancing.”

Of the three metrics, developers showed the biggest improvement in the ratio of their cash to short-term debt. The number of companies breaching the liquidity gauge shrank 64% from half a year earlier, data compiled by Bloomberg show.

Many firms still struggled with their liabilities-to-assets ratio, with 30 remaining non-compliant. Improvement for this metric could mean companies have to substantially increase earnings and boost equity, which is more difficult than improving the other two metrics, S&P Global Ratings analysts wrote in a note last week.

The number of developers breaching a 100% ceiling of net debt to equity, a gauge of leverage, halved from six months earlier, according to data compiled by Bloomberg.