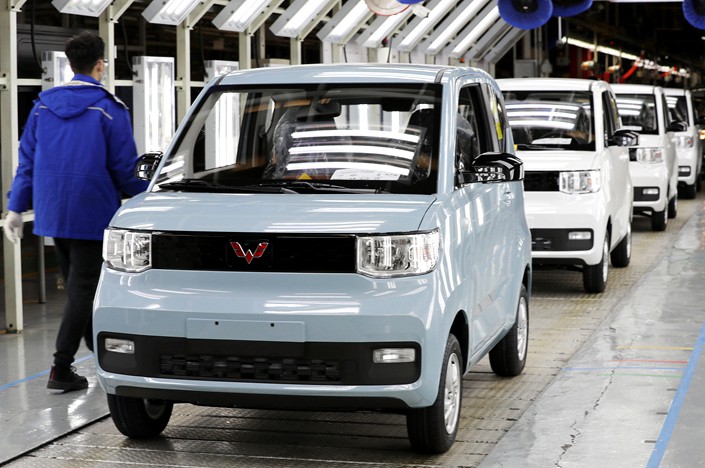 More than half of a new slate of pure-electric automobiles approved for use on China’s roads are mini-cars, as more companies vie to expand their share of the country’s budding market for low-end new-energy vehicles (NEVs).

Some 19 of the 33 new pure-electric cars included on the latest list of newly road-licensed vehicles published Monday by the Ministry of Industry and Information Technology (MIIT) are compact, short-range models that typically retail at around 30,000 yuan ($4,588), a sum equivalent to less than half the average annual disposable income of Beijing residents last year.

Last year, the Wuling Hongguang Mini EV produced by SAIC-GM-Wuling Automobile Co. Ltd. outstripped Tesla to become China’s hottest NEV by monthly unit sales by targeting drivers in less-affluent areas. Although sales in large, wealthy cities have so far driven the Asian nation’s emergence as the world’s largest NEV market, purchases in small and midsized cities are expected to grow tenfold by 2025, according to a recent report by the China Electric Vehicle Association.

Automakers in China must make sure that their models are included on the MIIT’s list of roadworthy vehicles before selling them on the domestic market.

With six vehicles (link in Chinese), Sichuan Yema has the most newly approved cars of any company on the list. Its range of four-door “Mango”-branded sedans, which are not yet advertised for sale on the company’s website, all have top speeds of 100 kilometers per hour and weigh less than 1,300 kilograms.

An industry veteran of more than 30 years, Chengdu-headquartered Sichuan Yema was founded in 1988 and acquired by Shandong province-based carmaker Levdeo Auto in January 2019.

Announcing earlier this month that the cars had formally entered production, Levdeo CEO Shu Xin said the company planned to sell 100,000 mini electric vehicles by the end of the year, rising to 400,000 next year and 600,000 in 2023.

Wuling, which is a joint venture between U.S. titan General Motors Co. and a Chinese partner, started selling its flagship Wuling Hongguang Mini EV in July last year, at one-tenth the price of the cheapest Tesla Model 3, which became available in China two months prior.

The Chinese upstart made headlines in September when a sales report from the China Passenger Car Association showed it had shifted more units of the two-door, four-seat battery-powered runaround than the Model 3 during the previous month.

The company’s overnight success stemmed partly from its strategy of targeting consumers in less-wealthy parts of China, and partly from generous state subsidies and increased government controls on unlicensed forms of cheap, short-distance transport.

Wuling sold 50,419 pure-electric vehicles in the first two months of this year, the most of any company in China, according to data (link in Chinese) from the China Passenger Car Association. Tesla ranked second with sales of 34,560 units over the same period.

Some 515,000 NEVs were sold in China in the first three months of the year, 433,000 of which were pure-electric vehicles, according to statistics (link in Chinese) from the China Association of Automobile Manufacturers. NEV purchases were 2.4-times higher than the first quarter of last year, when China’s Covid-19 outbreak caused a steep decline in sales.