Blog: The Worker Who Battled to Get His ‘Dust Lung’ Diagnosis Recognized, and His Two-Faced Guardian Angel 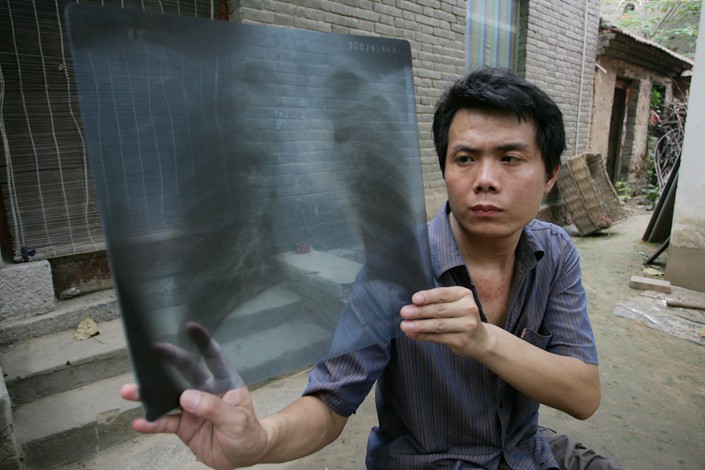 A notorious case of occupational disease in China resurfaced this April, with a twist — corruption.

By early 2009, Zhang Haichao, a 28-year-old from a small town called Xinmi in the central province of Henan, had been working as a crusher and press operator for more than three years. Feeling unwell, he went to hospital and was diagnosed with the lung disease pneumoconiosis. But as his company refused to provide supporting evidence, it was not identified as a disease that he suffered because of his job.

Zhang complained numerous times and was offered a fresh diagnosis by the local Occupational Disease Prevention and Treatment Center, which came back as “tuberculosis.” Zhang then made a bold decision: he asked the doctors to open up his chest and give his lungs a thorough examination. Despite their reluctance, this was eventually done, and he was proven to have indeed caught pneumoconiosis.

In July 2009, Zhang disclosed his hard-won pneumoconiosis diagnosis to the media, and suddenly found himself in the national spotlight. The provincial leaders of Henan stepped in, and it seems that justice had finally arrived.

The Zhengzhou Occupational Disease Prevention and Treatment Center overturned its diagnosis of tuberculosis and confirmed that Zhang was indeed suffering from pneumoconiosis, while the Xinmi Labor Bureau identified Zhang’s disease as being connected to his job. The director of the regional Occupational Disease Prevention and Treatment Center was suspended pending an investigation. Later, Zhang reached a settlement with his former employer for 615,000 yuan ($93,972) in work-related injury compensation for occupational pneumoconiosis. Zhang’s case had a big impact on public discourse at the time, and contributed to the revision and improvement of the Law on the Prevention and Control of Occupational Diseases in 2011. The “dust lung” case became a symbol of work-related injury in China.

But that wasn’t the end of the story. We will now introduce another figure.

Hearing of Zhang’s bold decision to open up his chest for diagnosis, Wang Tieliang, then party chief of Xinmi, jumped into action. He asked the city government to deliver Zhang a satisfactory solution in the shortest possible time. Zhang’s employer was fined 250,000 yuan, and key managers were either placed on party probation for a year or placed under investigation. Wang even visited Zhang’s home with photojournalists, apologizing to the victim by his first name: “Haichao, sorry for my belated visit.” In front of the cameras, he picked up Zhang’s daughter and kissed her cheeks.

It was only after Wang fell from power in 2020 that people learned the other side of the story.

An indictment published in April 2021 showed that Wang took advantage of his position to help a company in Zhengzhou avoid having production suspended pending rectification after Zhang’s case made headlines. Wang took a total of 400,000 yuan in cash bribes from the chairman of the company. In other words, Wang posed as Zhang’s guardian angel, but 10 years later we now know that what he was really protecting was the company that Zhang was suing.

In June 2013, Zhang got a lung transplant at Wuxi People’s Hospital.