By Matthew Walsh and Luo Guoping 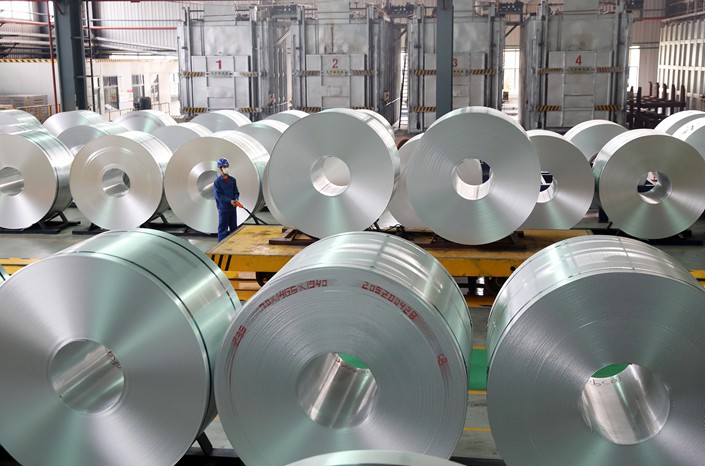 Chinese aluminum prices continued to edge higher Thursday, consolidating record-setting gains that have nudged the base metal to its highest global price in almost three years.

The benchmark price for aluminum on the Shanghai Futures Exchange stood at 18,320 yuan ($2,806) per metric ton at 5 p.m. local time, around 1% up on Wednesday’s intraday high, which saw the metal hit 18,000 yuan on the domestic market for the first time in nearly a decade.

Analysts said the price rise was fueled by speculation that China is readying to curb aluminum output in the Xinjiang Uyghur autonomous region as part of broad efforts to rein in carbon dioxide emissions. A Wednesday article by metals data provider Mysteel Global said businesses and industry groups in the far western region had not received orders to slash output.

The domestic inventory of aluminum ingots had fallen 4% since the end of March to around 1.2 million tons, with destocking picking up pace on downstream demand that has gradually strengthened since the second quarter of last year, said Li Jintao, a nonferrous metals analyst at First Futures Co. Ltd.

Shen Lingyan, a senior analyst at Beijing Antaike Information Co. Ltd., wrote last week in a market report that investor optimism had grown on China’s unprecedented liquidity easing and climate targets. The Asian nation plans to bring emissions to a peak by 2030 and become carbon-neutral by 2060.

Simultaneously high supply and demand for electrolytic aluminum had laid a foundation for price rises, the report said. Aluminum consumption has notably rebounded since the fourth quarter of last year, especially in the property, automobile and packaging sectors.

Aluminum prices on the global market are at nearly three-year highs, leading gains in base metals as Chinese trade data buoys the outlook for demand.

Commerzbank AG said China was badly affected by the coronavirus pandemic in the first quarter of 2020, so the reference basis for the trade report is relatively low. “Nonetheless, the data do indicate that China still has a considerable appetite for commodities,” Commerzbank analyst Daniel Briesemann said in a note.

Antaike forecasts electrolytic aluminum supplies in China will fall short of demand by around 100,000 tons this year. While periodic mismatches between demand and production will roil prices in the short term, long-term policy dividends will usher in a golden period for the market, with prices expected to hover between 15,000 yuan and 19,000 yuan per ton.

Looking farther afield, supplies of aluminum in China will not increase dramatically over due to the constraining effects of the country’s emissions reduction policies. Ge Honglin, the president of the China Nonferrous Metals Industry Association, said at a forum earlier this month that the government was soliciting feedback from businesses and industry groups on a proposed plan to peak the aluminum industry’s emissions as early as 2025.

Bloomberg contributed to this report