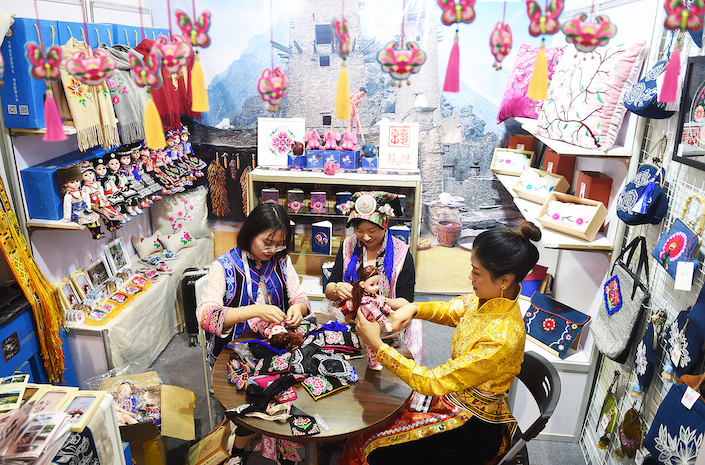 Hundreds of exporters in Yiwu, a city in east China’s Zhejiang province that operates the world’s largest small goods market, complained that their bank cards have been frozen by the public security authorities, blocking exporters’ access to funds paid by their clients.

The card freeze is part of a nationwide “Card Breaking Campaign” under way since October 2020, an operation aimed at cracking down on illicit bank card transactions in a bid to combat telecommunications fraud and cross-border online gambling, according to an internal memo circulated online.

As the campaign deepened, Yiwu public security authorities found telecom fraud as criminal groups colluded with underground banks to launder money by disguising their illegal proceeds as payments for goods and transferring it to Yiwu exporters, according to the memo sent by the criminal investigation team of Yiwu Public Security Bureau to the public security authorities across the country.

As a result, bank accounts and banking cards of many business owners in Yiwu have been frozen by public security authorities all over the country.

Yiwu authorities didn’t respond to a Caixin reporter’s request to confirm the substance of the memo. But public information suggests that local authorities have acted to freeze some bank accounts. A news release posted on the Yiwu municipal government website shows that the government set up an assistance center in November to sort out problems with frozen bank accounts and guide business owners to ensure they receive payment in compliance with regulations.

An exporter of kitchenware in Yiwu told Caixin that he has had two bank cards frozen, leaving him unable to get access to more. than 300,000 yuan ($46,000) of funds paid by his clients. A Caixin reporter joined a WeChat group consisting of more than 400 Yiwu exporters who complained about frozen accounts. Someone in the group told Caixin there are at least four or five similar WeChat groups of exporters.

Foreign trade companies in Guangzhou, Shenzhen, Taizhou and Ningbo have also reported frozen accounts, Caixin learned from multiple trading business owners. An exporter in Shenzhen told Caixin that his card with a balance of more than 200,000 yuan was frozen because 184 yuan of gambling money was transferred to his account.

Many people said police told them their banking accounts were frozen after they received payment from third parties, which could be individuals or currency exchange institutions, and these payments were suspected to be illegal funds from telecommunications fraud and online gambling.

Some exporters said they choose to receive payment through the underground banking network because some of their clients are based in countries sanctioned by the U.S. and so they are barred from the official banking system.

Some small exporters are unable to provide required information to comply with banks’ anti-money-laundering rules, so they choose to accept payments through the underground banking network, a banker at a Zhejiang major bank told Caixin.

“Bigger foreign trade companies conducting business in more established, developed markets, of course, have no such problems. But in Southeast Asia and Africa markets, you can’t do business the same way as in those mature markets. If you don’t adapt to local market rules and strictly require clients to do business through traditional payment channels, most clients in African countries simply can’t do it,” an exporter at the WeChat group said.

As all forms of gambling are illegal under Chinese law, to lure and facilitate domestic gamblers, online gambling sites generally use so-called “running points platforms” to launder gamblers’ funds to look like legitimate payments. These platforms transfer gamblers’ funds to bank accounts they acquire or borrow from individuals or retailers to disguise the transactions as legitimate online shopping deals.

In the first nine months of 2020, police cracked down on 1,700 online gambling platforms and 1,400 underground banks involving more than 1 trillion yuan ($153 billion) of illegal transactions, data from the Ministry of Public Security showed.