Editorial: To Root Out Arbitrary Fines, China Must Cut Off the Incentives 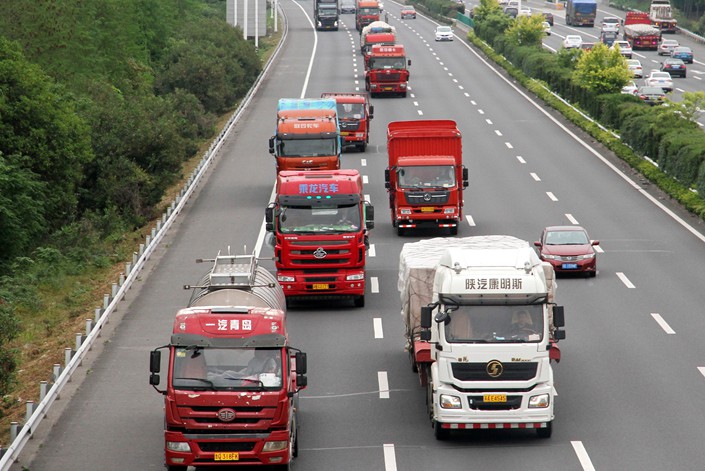 Two events related to arbitrary administrative fines have stirred public outcry in recent days. First, truck driver Jin Deqiang committed suicide by ingesting poison at a weight limit checkpoint in Hebei province; then Zhao Hongjun, another truck driver, slit his wrists in an act of deliberate self-harm at a similar checkpoint in Guangdong province. The two events have ignited fierce debate. Although the local governments have responded to the public’s concerns, doubts still fester and aftershocks reverberate. One incident occurred in North China; the other in the South; despite their seeming irrelevance to one another, each communicates a warning on the severity of arbitrary fines. To bring arbitrary fines under permanent control, the relevant authorities should analyze these events to accurately locate their root cause and take effective actions accordingly. To this end, administrative reforms and improvement of the fiscal and taxation system must move forward — and, more importantly, power should be confined to the cage of regulation per the establishment of a law-based country and modernization of national governance systems.

Fines should not be ends in themselves; they are tools for correcting illegal acts. As stated in the law on administrative penalties: “there shall be an insistence on penalty in combination with education.” In the absence of constraints, when fines correlate (implicitly or explicitly) with the interests of the local government, departments or individuals, the original intention underlying penalties will inevitably be distorted or perverted. As soon as confiscation becomes the underlying intent, there will be no limit — if fines can be exacted, they will be. Even if meeting formal requirements on the surface, they have lost their legitimacy and justification. Although the authorities in Hebei were firm in finding no serious fault with the weight limit checkpoint, truck driver Jin Deqiang was nevertheless compelled to express his grievance and despair by taking his own life; meanwhile, Zhao Hongjun deliberately harmed himself just for a chance to have his load rechecked, at which point it was found not to meet the overweight standard designated for penalties. Both events are evidence of authorities treating decisions on penalties as trivial matters.

Arbitrary fees and penalties, however, are hardly a new problem. In the early stages of reform and opening up, when the market economy was incomplete, a “vassal economy” took hold; arbitrary punishment, entrapment, novel fines and other phenomena were rife as the tax sharing system was just being established. There were two direct reasons for this: implementation of “return or detain” confiscation, and the linking of confiscated income with the expenditures of law enforcement agencies. (Despite the existence of central policy requiring law enforcement agencies to hand over all confiscated income to the financial department for separate allocation, confiscated income would find its way back to law enforcement agencies in various forms, essentially forming an incentive mechanism for increased, and ultimately arbitrary, collection.) However, the central government policy of “separating income and expenditure” — that is, decoupling non-tax revenue like fines from government spending — resolutely implemented at the turn of the century and subsequent rounds of special rectification significantly improved the situation. But arbitrary fees and penalties remain, now cloaked in more covert forms or means. Even as the central government is vigorously streamlining administration and delegating power, standardizing law enforcement and optimizing the business environment, it is astounding that some local authorities still cannot help themselves from exacting arbitrary fees and penalties.

Although local governments may come up with a number of reasons justifying their arbitrary collection and penalization, using confiscation as a means of illegal wealth accumulation is blatantly harmful. As downward pressure increases on the economy, and administrative fees are continually exempted or reduced, some local governments have become over-reliant on confiscated revenue. Fiscal revenue growth has generally slowed or even become negative under the effect of the Covid-19 pandemic. Despite this trend, some regions reported a growth in confiscated income, mainly coming from micro and small businesses. Although the policy of “separating income and expenditure” is well in place, plenty of room is left for manipulation in its execution. It is inevitable that some local governments will use the policy’s opacity and other defects to their advantage. The occurrence of malicious events may seem haphazard, but is, in fact, inevitable.

If penalties are to be regulated, the incentives upholding arbitrary fines must be dug out at the root. Relevant central departments and local governments at all levels should seize the current typical cases as their chance to conduct systematic and in-depth investigations into the continued existence of arbitrary fees and penalties despite 20 years of the “separating income and expenditure” policy, identify the “latent rules” and determine how to eliminate them. They should also investigate why chaotic phenomena tend to be concentrated in certain regions and sectors. Finally, authorities should release the results of these investigations to the public. Although disciplinary sanctions must be assigned to the guilty party and administrative officials in typical cases, that should never be the end of the matter.

To a certain extent, faulty incentive mechanisms reflect systemic defects. Incomplete reform of the fiscal and taxation system has played a major part in the repeated failures to regulate arbitrary fines. For years, the central government has striven to establish systems to match the financial powers and expenditure responsibilities of government bodies at all levels. Though progress has been made — particularly with the long-delayed reform to “straighten out the intergovernmental fiscal relations under the provincial level” — reform in this area has yet to see any major breakthroughs. After completion of the VAT reform (replacing business tax with value-added tax), local governments suddenly lacked a major tax, and it did nothing to fundamentally improve the financial plight of governments at the grassroots level. Their financial weakness served as an excuse for arbitrary collection.

The uprooting of arbitrary fees and penalties should be a key mission in the construction of a law-based country. The powers, responsibilities, procedures and arrangements of fines should conform to laws and regulations and strive for standardization and transparency, while the basis for collecting fines must be able to withstand legal review. For disputed penalties, the administrative counterpart must have sufficient channels of relief. However, it is even more important that law-based governance be reflected not just in form, but in essence. Provided that the bases for penalties, the subjects of penalties and the procedures for penalization are all legitimate, if malicious events still occur with great frequency, it can only mean that law-based governance has yet to be put into practice.

Arbitrary charges and fines have also done direct harm to local business environments. Establishing a uniform, open and orderly modern market system is an essential requirement for a market economy. Market factors are fluid. Although arbitrary fines are profitable at the moment, in the long run, they destroy the image of the region where they are exacted. Unfortunately, it is simple to destroy an image but much harder to restore it. Arbitrary fines are therefore a kind of suicidal behavior in the national market. After the suicide of Jin Deqiang, a fellow truck driver who drove the same routes expressed his indignation in a widely viewed video, saying “I would starve before I ever went there again.” It is hard to say whether his comments will move the local government.

Meanwhile, a group of commentators pointed the finger at technology in the wake of Jin Deqiang’s death. Actually, the BeiDou vehicle-mounted navigation system and its business applications have played a crucial role in enhancing industrial safety monitoring and emergency response capacities. Technology itself is neutral — but in human hands, it becomes a double-edged sword. It can improve driving safety or it can assist in collecting arbitrary fines. Modern technologies should keep pace with modern concepts.

It is heartbreaking that two truck drivers working so hard to earn a living were brought to harm — one fatally — by penalties originally designed as an ordinary administrative act. To bring peace for the deceased and issue a warning to the living, these negative events should be kept fresh in our memories and add momentum to the modernization of China’s national governance system. Only by bearing two essential questions in mind can we truly confine power to the cage of regulation: By whom is the power given? For whom is the power executed?