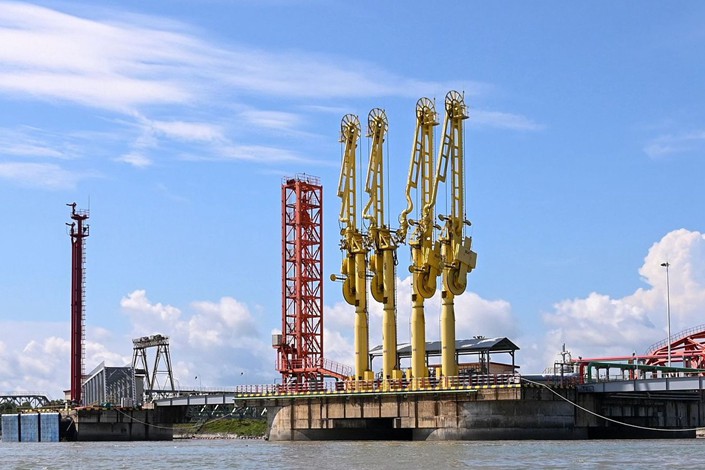 (Nikkei Asia) — Energy multinationals have decided to halt natural gas development projects in Myanmar amid concerns that the junta is deriving foreign currency from the ventures. But France’s Total is poised to remain, arguing that the public stands to lose from electricity shortages.

Malaysian oil major Petronas announced early this month that it would indefinitely suspend production at the Yetagun gas field off the southern coast of Myanmar. It declared force majeure over “a drastic decline in production level” since January, with output “well below the technical turndown rate,” an executive said in a news release.

Petronas holds a 40.9% interest in Yetagun. Interests of 19.3% each are controlled by Thailand’s state-backed PTT Exploration and Production and by a three-way joint venture of the Japanese government, JX Nippon Oil & Gas Exploration and trading house Mitsubishi Corp.

The remaining 20.5% is owned by state-run Myanma Oil and Gas Enterprise (MOGE).

Australia’s Woodside Petroleum, which had been developing a new gas field off the coast of Myanmar, condemned human rights violations in a statement on the “deeply distressing” reports of violence against participants in peaceful protests.

“We have reduced our presence in country and full demobilization of our offshore exploration drilling team has been completed,” the company said in a news release. “Woodside does not have any producing assets in Myanmar, nor do we currently generate any revenue in Myanmar.”

Woodside finished pulling relevant staffers and machinery out of the country in March, according to its communications team.

Woodside won rights to develop a block through a partnership with Total and a Myanmar energy company. The project would have involved billions of dollars in spending.

Natural gas used to be the source of foreign currency for Myanmar’s military government that had been in power until 2011. The Committee Representing Pyidaungsu Hluttaw, a group of ousted lawmakers allied with detained civilian leader Aung San Suu Kyi, in mid-March publicized open letters urging international energy groups to cut ties MOGE.

About 80% of Myanmar’s natural gas is transported to Thailand or China via pipeline. United Nations statistics show $3.3 billion in exports last year for the category including natural gas in gaseous form — accounting for 20% of all goods exports by Myanmar.

Although natural gas’ share of exports has diminished with the rise of the textile industry, the fuel remains the country’s core source of foreign-currency revenue.

The oil and gas sector “is the single largest source of revenue flowing into the hands of this criminal enterprise,” said Thomas Andrews, the U.N. special rapporteur on human rights in the country, in a Senate Foreign Relations Committee hearing in late March. “So, I think it’s critical ... that we cut it off.”

Kelley Currie, who served in the Trump administration as ambassador at large for global women’s issues, said in written testimony that Western partners of oil and gas joint ventures with MOGE “should invoke a three-month force majeure suspension of payments, and work with their governments’ financial authorities to establish an escrow mechanism to facilitate continued contractual payments.”

“This would force the junta to take them to arbitration or refuse to take delivery of refined fuel,” she argued.

A standstill in gas production would threaten the livelihood of Myanmar citizens. About a fifth of the natural gas is consumed domestically, mainly in the power industry. At 6 gigawatts, gas accounted for 40% of the nation’s power generation capacity in fiscal 2019, according to the government.

Production at four existing undersea gas fields is due to decline in the early 2020s as reserves get depleted. Imports of liquefied natural gas began last year while the government promoted the development of new gas fields.

Local energy companies lack the resources to explore for gas on their own, so the exit by foreign partners would eventually lead to a shortage of power, as well as foreign currency.

Total, which runs Myanmar’s largest undersea gas field in terms of output in volume, plans to continue production there. The field supplies about half of Myanmar’s natural gas used for power generation.

A production stoppage would equate to a loss of electricity for millions of people, Total CEO Patrick Pouyanne said in an opinion piece for a French newspaper.

If Total does halt gas production, “we are convinced the junta will not hesitate to resort to forced labor,” Pouyanne wrote.

Posco International, a trading affiliate of South Korean steel giant Posco, produces natural gas off the coast of Myanmar’s Rakhine state. The company has continued to maintain output with no problems and expects to keep up normal operations in the foreseeable future, a representative told Nikkei.

Another group company, Posco Coated and Color Steel, recently announced that it would dissolve a joint venture with a conglomerate tied to the military. But the Posco group appears poised to persist with its natural gas operations.

PTT Exploration and Production, which holds interests in multiple gas fields, has remained silent since the Feb. 1 coup. It seems unlikely the company will abandon the gas interests, since Myanmar is the source of more than 40% of Thailand’s imported gas.

Sanctions targeting natural gas will be a powerful trump card against the junta but would negatively impact the public and neighboring countries. An energy major that withdraws from a gas project will find it difficult to reenter the market once the dust settles. The balancing act against international opinion complicates the dilemma.